The role of John Bolton as neo-con wrecker 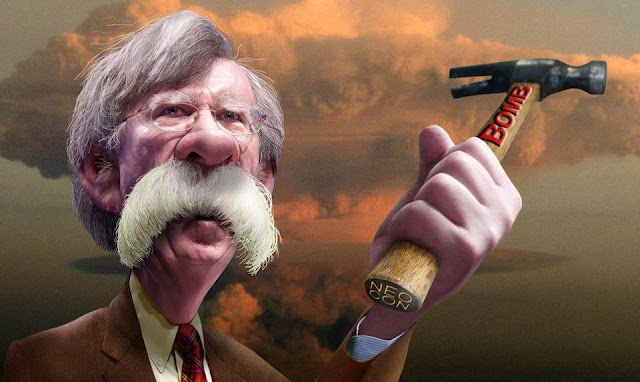 
U.S. President Trump just canceled the planned summit with North Korea's chairman Kim Jong-Un. The two were supposed to meet on June 12 in Singapore. In a letter to Kim Jong-un, released to the media, Trump accused North Korea of hostile statements which, according to him, make the summit impossible:

Sadly, based on the tremendous anger and open hostility displayed in your most recent statement, I fell it is inappropriate, at this time, to have this long planned meeting.

Since the very first summit talk National Security Advisor John Bolton set impossibly high expectations for the results. Trump fell for it.
The various 'hostile statements' go back to remarks by Bolton who has for some time compared disarmament of North Korea to Libya. On April 29 Bolton again asserted that the 'complete de-nuclearization' of North Korea would follow the 'Libya model'. North Korea never really offered to 'de-nuclearize'. It rejects the 'Libya model' for two reasons:
North Korea pushed back against the Bolton statement. On May 16 the White House made amends by not endorsing what Bolton said:

Referring to the Libya comparison, White House press secretary Sarah Sanders said Wednesday that she hadn't "seen that as part of any discussions so I'm not aware that that's a model that we're using.

"I haven't seen that that's a specific thing. I know that that comment was made. There's not a cookie cutter model on how this would work."

But a day later Donald Trump was asked about the Libya comparison and he seemed to agree with it:

“The model, if you look at that model with Gaddafi, that was a total decimation. We went in there to beat him. Now that model would take place if we don’t make a deal, most likely. But if we make a deal, I think Kim Jong-un is going to be very, very happy.”

We called that the 'art of the mafia deal': "Sign here or we will kill you." Signing under threat is something North Korea will never do.
The U.S. media played down Trump's talk as somewhat off-the-cuff. North Korea did not react to it. The summit train was still on track.
But on May 21 Vice President Pence revived the issue in an interview with Fox News:

PENCE: We really hope that Kim Jong-un will seize the opportunity to dismantle his nuclear weapons program and do so by peaceable means. You know, there were some talk about the Libya model last week. And you know, as the president made clear, you know, this will only end like the Libya Model ended if Kim Jong-un doesn't make a deal.

MACCALLUM: Some people saw that as a threat.

PENCE: Well, I think it's more of a fact. President Trump made it clear the United States of America under his leadership is not going to tolerate the regime in North Korea possessing nuclear weapons and ballistic missiles that threaten the United States and our allies. We've made it clear that we are continuing to bring economic and diplomatic pressure to bear on North Korea that all options are on the table to achieve that end.

It was clear from the beginning that North Korea would not negotiate a complete de-nuclearization and would not talk while under such a threat. As the Washington Post noted: The more Pence and Trump say ‘Libya,’ the angrier North Korea gets.
The continuation of the Libya comparison was now a tactic to avoid the little prepared summit talks while blaming North Korea for the failure. The response from North Korea to Pence's remarks was quite salty but not overly hostile. Unlike Trump it did not threaten "total decimation":

Choe Son Hui, the DPRK's vice foreign minister, said she would put forward a suggestion to DPRK top leader Kim Jong Un for reconsidering the DPRK-U.S. summit scheduled for June 12 if the United States continues with hostile remarks and actions, according to the Korean Central News Agency.
...
Calling the remarks of Pence "ignorant and stupid," she said that Pence should seriously consider the "terrible consequences of his words" before making such remarks.

"We could surmise more than enough what a political dummy he is as he is trying to compare the DPRK, a nuclear weapon state, to Libya that has simply installed a few items of equipment and fiddled around with them," she said.

Trump's cancellation letter refers to that statement.
The cancellation comes hours after North Korea, in the presence of a dozen international journalists, blew up several tunnels it had used for nuclear tests. This was a confidence building measure even while it is of little practical value. North Korea is mountainous and has several more tunnels it can use for further nuclear tests.
I now expect another phase of huffing and puffing from both sides. The U.S. will do more fly-bys with nuclear capable bombers and push for more sanctions. North Korea will respond with more nuclear and missile tests.
Trump had expected a fast victory and probably even a total de-nuclearization of North Korea. He dreamed of a Nobel Peace Prize. But North Korea had offered de-nuclearization only as a long term aspiration for the whole world. Giving up its nuclear capabilities would be suicidal as the U.S. will not honor any security guarantees it might give in exchange. Trump proved such when he canceled the JCPOA deal with Iran.
When the summit between North and South Korea took place on April 27, I had identified several potential spoilers for a disarmament and peace process. John Bolton was one of them. His introduction of the 'Libya model', which Trump and Pence who are both novices in international talks then took up, sabotaged the deal.
The largest known rare earth deposit of this world will continued to be out of Washington's reach.