Putin’s Big Warning To NATO: “Ukraine Is Our RED LINE” 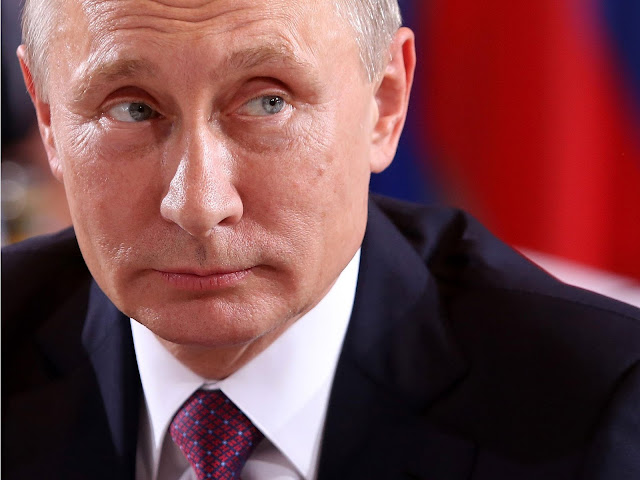 Russian President Vladimir Putin warned Western countries not to cross the “red line” in relations with Moscow.
“Well, there are certain limits, understand that the ‘red line’ should not be crossed. Respect our interests as well,” said the president on Saturday during the St. Petersburg International Economic Forum in 2018.
According to Putin, NATO’s enlargement could pose a threat to Russia. The Russian president stated that this situation arose in Ukraine after the coup.
“In addition to the fact that NATO has approached our borders, we suspect that tomorrow Ukraine will also be included [in the Alliance] and place radars and anti-missile defense systems,” said the Russian leader. Putin has made it clear that such an alliance is unworkable, and herein lies the ‘red line’.
The Russian president also recalled the role of some Western countries in the coup in Ukraine. He asked why Western countries contributed to the change of power with the use of force, when Ukraine already had “pro-Western” politicians like Yulia Timoshenko or Viktor Yushchenko.
On February 22nd a coup took place in Ukraine. Subsequently, Kiev announced its intention to join NATO and the EU. However, both organizations greatly doubt the capacity of Ukraine to be a member state. They simply push a policy in the negative, to keep Ukraine at odds with Russia, even though there is no realistic place for Ukraine in the EU. Russia will not tolerate Ukraine as a NATO member state, and Ukraine will be the guarantor of its own economic isolation from Russia should it test this proposition too heavily
Russia has proven to act when it is threatened by aggressor states, such as the 2008 intervention in South Ossetia when NATO-backed Georgia decides to attack Russian citizens in the South Ossetia region. It has also proven to act to defend the Russian-majority in Crimea when the Ukrainian regime decided to take aggressive steps against the community.
In addition, Russia has played a key role in defeating US-backed terrorist groups in Syria that have directly threatened to attack Russia as well, especially as thousands of Russians and former Soviet citizens flocked in Syria to wage a jihad. Russia intervened in Syria in September 2015. Since then terrorist forces have been on a decline and control very few areas of Syria now.


CONFLICT IN EASTERN UKRAINE CAN SOON TURN INTO OPEN WAR

This week the military situation in eastern Ukraine has once again escalated as forces loyal to the Kiev government have advanced on positions controlled by defense forces of the Donetsk People’s Republic (DRP) near the city of Gorlovka.

Gorlovka is the DPR-controlled town, located north of the DPR capital of Donetsk. Its pre-war population was about 256,000 people.

On May 21, pro-Kiev troops, backed up by artillery and machine guns fire, stormed positions of DPR forces at the settlement of Golmovskiy, north of Gorlovka. They failed to overrun the DPR defense but killed at least 1 DPR fighter and captured 3 others. At least 10 Kiev soldiers were killed and 4 others were injured, according to the DPR side.

On May 22, a group of Kiev troops, backed up by battle tanks and BMP armoured vehicles, advanced on the settlement of Chigary, northwest of Gorlkova. Firefights also erupted in the settlement of Zaitsevo and in the area of Southern Mine. According to reports, at least 2 pro-Kiev fighters were killed and 4 others were wounded in these clashes.

On May 23, sporadic clashes in the area of Gorlovka continued. A total number of casualties of pro-Kiev forces reached at least 31 killed and 40 injured fighters.

Since the start of the week, artillery units of the Ukrainian Armed Forces increased strikes on Gorlovka and the nearby settlements. The shelling resulted in casualties among civilian population and destruction of buildings in the residential areas.

According to statements by Ukrainian officials and public figures, pro-Kiev forces are pursuing the following goals:

To establish control over key heights near Gorlovka;

Using the control over the key heights, to isolate the city and to force DPR troops to withdraw from it;

To use the captured area as a foothold for further operations against the DPR in the areas of Enakievo and Debaltsevo.

The town of Debaltsevo is a key logistical hub between the DPR and the Lugansk People’s Republic (LPR). In 2015, pro-Kiev forces suffered a devastating defeat during the Battle of Debaltseve. Hundreds of troops were killed, wounded and captured by DPR and LPR forces. The Kiev plan to separate republics via a land advance failed.

However, Ukrainian leadership has not abandoned attempts to interrupt traffic between the LPR and the DPR. Currently, it uses saboteur groups for this purpose. On May 21, a bridge in the area of Ivanovka was blown up by Ukrainian saboteurs interrupting a direct supply line between Lugansk and Krasniy Luch.

Krasniy Luch is known for hosting some weapons depots of LPR forces.

Local sources also report that the Kiev side has concentrated a notable number of troops and military equipment, including battle tanks, in the area of Stanytsia Luganskaya.

The Organization for Security and Co-operation in Europe (OSCE) has commented on the recent escalation by calling on the sides to stop fighting and to fulfill their earlier commitments. Offensive actions by pro-Kiev forces have not been condemned.