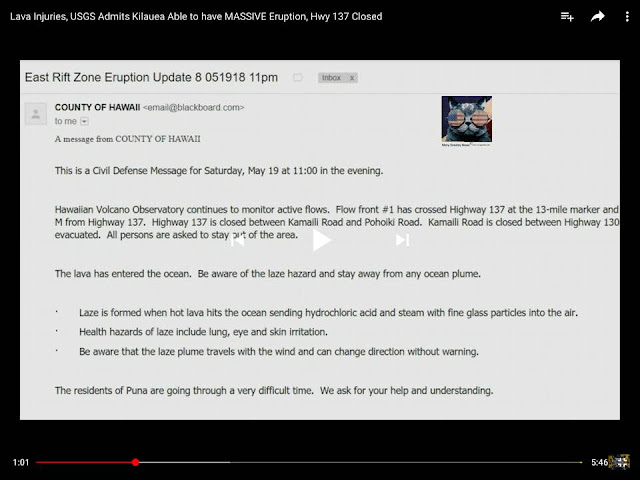 USGS now admits this volcano is capable of have large devastation eruption and people are not trained to deal with this new fast moving situation. Kilauea is not the lazy volcano they always thought it to be.

New lave coming up from the earths mantel is now flowing into the ocean causing more health risks. Particles of glass you could breath in that can not be explled from you lungs by coughing.

Mick Kalber : An unbelievable amount of lava is erupting from fissures below Leilani Estates on the Big Island of Hawaii!

More than twenty cracks are issuing red hot liquid rock, which is coursing downhill, destroying homes, cars, roads... and anything else in her path.

The fissures have now joined forming a "curtain of fire" in a spectacular display.
Numerous fingers of lava have stretched toward the sea overnight, and this morning were only about a mile from the water.

Over forty homes have been destroyed since the eruption began fifteen days ago. Although it began in Leilani and burned several homes there, she soon established her vents below the subdivision with towering fountains, spatter cones feeding gigantic lava flows.

So far, no deaths have been reported.

First responders have evacuated several residents who had become trapped by the fast moving flows. Pohoiki Road has been covered with lava, but Highways 132 and 137 are still open as of this writing.

If she continues at the same rate we saw this morning, she may cross the "Red Road," and make the ocean by tonight or tomorrow. No lava is currently erupting in the Leilani Estates subdivision.


Mahalo to the kind folks at Paradise Helicopters... they offer the finest charters in the islands!

As both a volcanologist and an acoustician, I can explain the 'boom' sound from Fissure 17 is caused by the sudden release of pressurised volcanic gases in the lava. HVO have now confirmed from the chemical analysis of lava spatter samples (as I suggested) that what was previously erupting from the Pu'u O'o Crater (further up the East Rift Zone) is now erupting in the Lower East Rift Zone, and that the source is from fresher batches of magma up-welling from the mantle plume beneath Big Island, which would explain the more vigorous, gas-driven eruptive activity.

There are updates from HawaiiNews Live

A new crack could divert lava

It's not a major diversion, but scientists are tracking a new crack that formed Sunday.

They say it opened under the east lava channel and could've possibly sent lava back underground.

"This may cause changes downslope in the channel system and the ocean entry," HVO staff said.

The ocean entry point however shows no sign of slowing or weakening.

May 18th brought a new alert from the Hawaii Volcano Observatory staff. Around 8:45 a.m., they reported levels of toxic sulfur dioxide near the lava flow tripled, and residents were urged to take the necessary precautions to avoid exposure.

The lava flow from fissure 20 first dripped into the Pacific Ocean Saturday night. The lava is entering the ocean at two points along the southeast coast of the island, in the vicinity of the Mackenzie State Park.

The U.S. Coast Guard is enforcing a 300-meter safety zone for mariners.

Around 11 p.m. Saturday, Hawaii County Civil Defense confirmed that fast-moving lava had crossed over Highway 137, just south of Mile Marker 13, and entered the ocean off the coast of Hawaii Island

The highway is a critical access point and the main evacuation route for many residents in Lower Puna.

Lava entering the ocean is also prompting warnings from officials about the threat for hazardous laze. Laze is formed when lava hits the ocean, sending hydrochloric acid and steam with fine glass particles into the air. It can cause lung, eye, and skin irritation.

Residents are being asked to avoid the area and any contact with a plume.

The Department of Transportation says Highway 130 between Malama Street and Kamaili Road is still open to local traffic.

State crews are working to prepare the Chain of Craters Road as a future evacuation route.

Around 6:45 p.m. Saturday, Civil Defense officials said brush fires were spreading towards homes along Kamaili Road in the Opihikao area.

The brush fires were ignited by lava flowing nearby.

Residents were told to "evacuate immediately" as authorities went door-to-door to clear the area.

The public is advised to stay away from the area until further notice.

Man reports injuries after being hit with lava

A man suffered serious injuries Saturday after he was hit by spattering lava.

He was at home on Noni Farms Road when lava flew through the air and landed on his shin.

The DLNR Division of Forestry and Wildlife closed the Malama Ki Forest Reserve on the Big Island on Saturday after lava began flowing into it. DLNR officials say maps showed one of three separate lava flows heading to the ocean — with one going through the forest reserve.

It’s also possible that the steadily intensifying lava flows could impact the Mackenzie State Recreation Area. It and Lava Tree State Monument were closed in early May after a series of earthquakes caused cracks in Highway 137.

HELCO crews are currently looking for safe area to set up portable generators and other power equipment. Plans include large capacity diesel generators, as well as portable solar-battery-generator units.

“For the past week, engineers from Hawaii Electric Light and Hawaiian Electric have been analyzing possible scenarios and creating plans that can help power critical infrastructure, such as cell phone towers,” said Rhea Lee-Moku, a HELCO spokesperson. “We’ve developed several plans that can be implemented to provide short-term solutions."

"Work on long-term solutions will continue and will be dependent on the impact of the lava and other seismic activity in this area, as well as guidance from Civil Defense authorities," Lee said.

Volcanic emissions and vegetation on fire is making for poor air quality conditions in parts of Puna, the USGS has warned.

That means people shouldn't venture into the community.

On Friday, violent eruptions were reported in several areas of Puna.

The four were rescued by National Guard and Hawaii County choppers.

Others in the area are being asked to stay in place and "await further instructions."

Scientists say the lava that flowing into Leilani Estates and Lanipuna Gardens is fresh — right from Kilauea's summit.

The first eruptions that happened in the lower Puna subdivisions were spitting out older lava from a 1955 flow. The lava was sticky, pasty and slower.

But on Friday, geologists said tests confirmed lava erupting in the area now is from the summit, which means it's fresher and hotter.

And, it means it's likely to move faster and farther.

Posted by seemorerocks at 14:37