How are weather conditions Down-Under?

In my 62 years on the planet – or most of it – May has always meant the beginning of the cold weather and the first frosts.

It is in the nighttime temperatures I notice the biggest difference. I have been waking up in the middle of the night sweating under my duvet. Never mind the colder South Island but the statistics tell me the mean lowest temperatures for Lower Hutt where I love should be 6.9C.

When I woke last night it was 12C 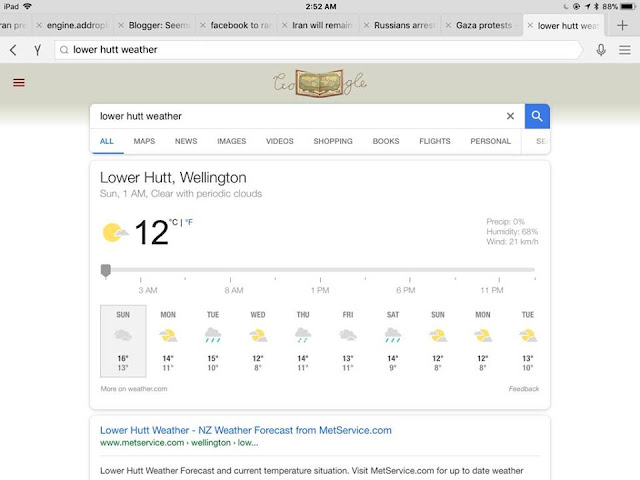 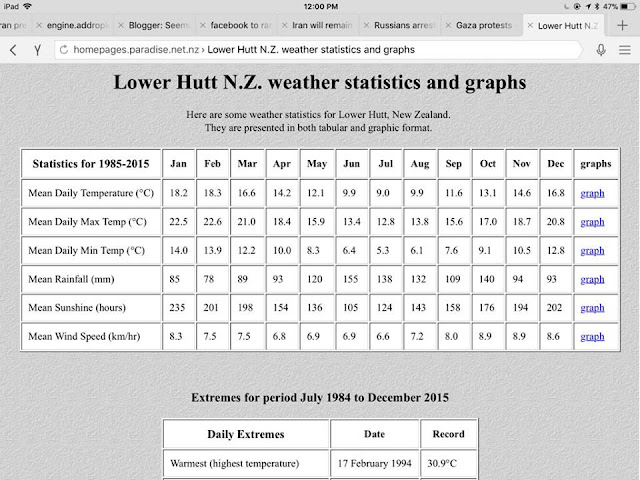 The statistics that the average temperature should  be 12.1C and the mean highest temperare is 15.0C.

Today, according to the internet the temperature late-morning is 15C whereas my thermometer in the garden tells me it is 17C.

That is a pretty significant deviation from the norm.

You'l have to take my word for it but we are 3 weeks into May and the temperatures have hardly been any different throughout that time.

We have not yet had anything that is close to a frost in that 3 weeks. 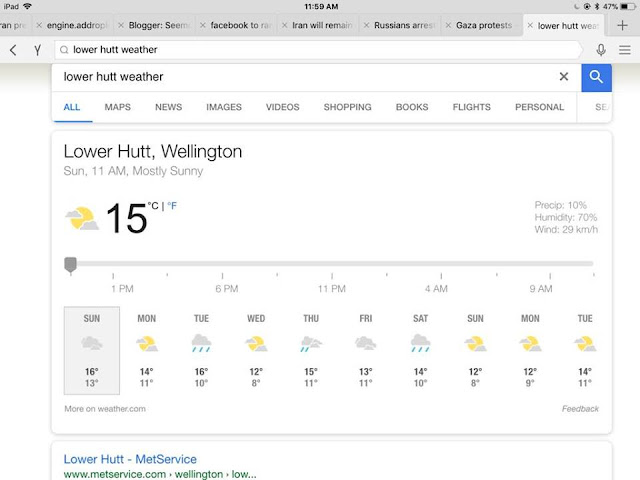 Meanwhile the media (mostly overseas as far as I can ascertain from DuckDuckGo) has reproted the largest wave ever recorded - 78 feet (23.8 meters).

Updated |The largest wave to form in the southern hemisphere was recorded Tuesday in the Southern Ocean, off the coast of New Zealand. The behemoth measured 78 feet and washed ashore at Campbell Island. An expert suggested the monster wave might not be an anomaly and that future storms may bring even larger waves.

The wave was recorded by a buoy floating in the remote Southern Ocean, The Sydney Morning Herald reported. It is believed to be the largest ever documented in the southern hemisphere, beating out the 72-foot wave that was recorded in Tasmania in 2012, the BBC reported. However, exact wave heights are hard to keep a record of, as the World Meteorological Organization does not hold numbers on individual wave heights but rather the average of swells, or wave movements in the ocean.

Larger single waves have been recorded in the northern hemisphere. According to the Smithsonian Ocean Portal, the largest wave ever recorded occurred in the North Atlantic Ocean in 1995, and at its peak reached 84 feet.

As far as the "hot blob" in the Tasman Sea is concerned the situation remains much the same; it seems to have moved to the east of New Zealand and lessened in the Tasman and off the coast of Australia which has been seeing some fridgid conditions.

Cold snap here to stay as Australia’s autumn gets chilly


THE cold snap was no fluke with warnings of subzero temperatures this week as Australia shivers its way through autumn. 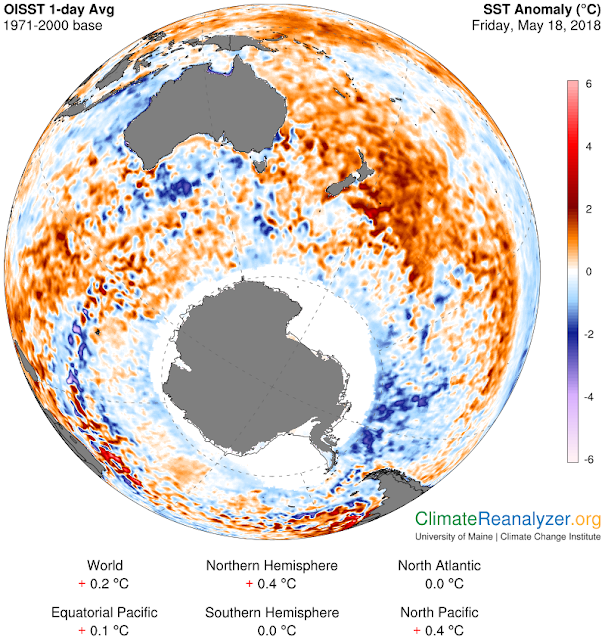 The weather authorities have been explaining the extremes of recent months with la-NIna which ususally brings cooler, wetter easterly conditions). Before that similar conditions were el-Nino!

Now it looks as if we are headed back towards an ELNINO. 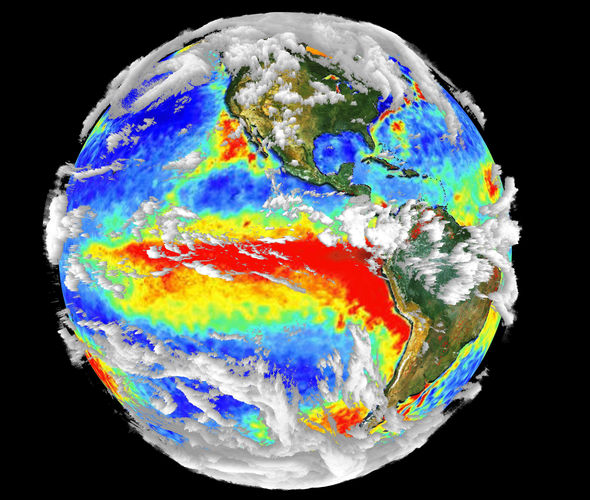 The odds now strongly favor an El Nino forming in the Pacific Ocean, federal climatologists said Thursday, tilting the long-range weather outlook toward a warm 2018-19 winter in the Northwest.

The cool waters that ruled the seas along the equator since last fall have warmed to normal or just-below normal temperatures. The federal Climate Prediction Center, a branch of the National Weather Service, puts the chances that waters will heat to El Nino levels by December at 70 percent.

El Nino winters are generally warmer and drier in the northern U.S. But it’s not a sure bet, Washington State Climatologist Nick Bond said.

“It’s completely possible we’ll have a cold winter, but more likely it will be on the warmer side,” he said. “The odds of having a little below normal snowpack are higher than usual.”

A month ago, the prediction center put the odds of an El Nino by winter at just under 50 percent. The center said the increasing odds heavily influenced its updated outlook, especially for the fall and winter.

The forecast favors higher-than-average temperatures in California, Idaho, Oregon and Washington from now until August 2019.

Washington, Oregon and the western half of Idaho are expected to receive below-average precipitation through February 2019.

California and eastern Idaho have equal chances of below-, above- or average precipitation during that time, according to the prediction center.

Last May, the prediction center said the odds slightly favored an El Nino. Instead, a La Nina, a cooling of the ocean, formed. “It shows you have to keep an eye on things,” Bond said.

The center predicted an El Nino in May 2014 and was correct that time. The following winter was mild and led to Washington’s “snowpack drought” of 2015 when precipitation was plentiful but it fell in the mountains as rain instead of snow.

“It’s possible it could happen again, but that was so extreme, it’s really unlikely,” Bond said.

El Nino persisted and grew stronger for the winter of 2015-16. Average temperatures statewide were above normal, but enough precipitation fell to erase the drought.

***
This is the official prognosis from NIWA. Of course they see things in  terms of the past and can find an excuse for every extreme ("la-Nina...el-NIno... anticyclones"...).

Don't mention the elephant in the room!! 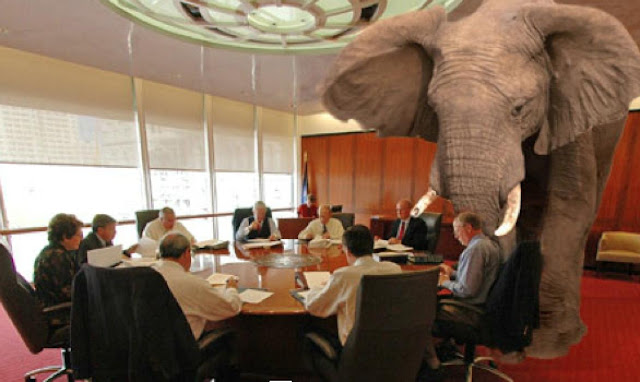 Weak La Niña conditions continued in the tropical Pacific during March 2018, but trends in low-level winds and in sub-surface ocean temperatures during the month indicate that the event is coming to an end.

The Southern Oscillation Index (SOI) is currently positive at about +1.0 for March. Sea surface temperatures (SSTs) remained colder than average in the eastern equatorial Pacific Ocean but have returned to near normal around the Dateline. However, the layer of colder than average SSTs is now very shallow (75 metres or less, except close to the South American coast), with warmer than average sub-surface water spreading eastwards during March as far as 120°W.

The consensus from international models is for the tropical Pacific to transition to an ENSO-neutral state over the next 3 month period (75% chance over April – June 2018). ENSO-neutral remains the most likely outcome over the late-winter season (July – September 2018). The forecast models predict about an equal chance of the Pacific remaining neutral or transitioning towards El Niño over the spring (September – November 2018).

Even though La Niña’s influence will wane over the next three-month period, New Zealand’s regional climate over April – June 2018 is expected to be driven by persistence of more northeasterly airflow than normal, and by the persistence of warm ocean waters that are present around the country. The northern Tasman Sea will remain unsettled, with lower pressures than normal, bringing the likelihood of significant rainfall events to the North Island and the upper South Island. 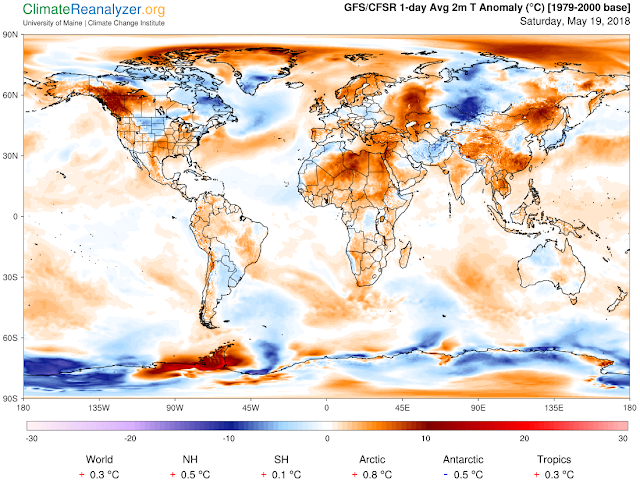