Making Millions of Americans Die for Their Country, Or Is it Israel?

BREAKING: Trump’s Plan: Making Millions of Americans Die for Their Country, Or Is it Israel? We’re Confused

The US and Russia are on the brink of war, the shooting may begin at any moment
By Ian Greenhalgh 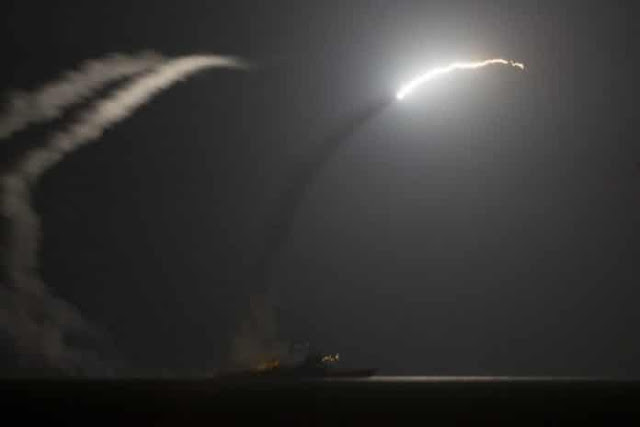 Veterans Today,
9 April, 2018
[Note from the Senior Editor: Your cowardly attempts to start a world war on behalf of your organised crime masters by forcing Russia to sink the USS Donald Cook (known in military circles as the Donald Duck) has not gone unnoticed.
On the tongues of everyone in Washington: ‘when is somebody going to yank Trump’s security clearance, he has obviously lost his mind’.
Too many are saying ‘America has it coming’ and we finally need to be on the receiving end of shock and awe, and if Russia can do one thing well, it’s kick ass. I am not part of that group but I understand how they feel, real patriots are starting to hate the United States.
What’s that whirring noise? That’s Thomas Jefferson spinning in his grave. G]
[Editor’s note: It should come as no surprise that Trump is about to attempt to attack Syria, for that is one of the reasons he was installed in the White House – so that the US military can be used to fulfil the nefarious agenda of the criminal elite that control Trump.
I say attempt as it is by no means certain that such an attack would meet with any success, especially since the last attempt, in the wake of the Khan Sheikhoun false flag gas attack last year was an abject failure as most of the cruise missiles were shot down, either by conventional air defences or by state of the art Russian electronic warfare systems.
In a ‘you simply cannot make this shit up’ scenario of immense irony, Trump has deployed the USS Donald Cook off the Syrian coast, the exact same warship that was humiliatingly disabled and turned into a sitting duck off the coast of Crimea in 2014 by low flying Russian jets using some kind of highly advanced electronic weapons system.
Reports from Syria say that Russian aircraft have already begun to make low level passes at the USS ‘Sitting Duck’, so unless the ship has been completely overhauled with new systems immune to the Russian electronic technology, it is liable to once again be disabled and left floating helplessly, unable to harm anyone.
Does the US Navy think it can succeed this time around, that somehow it’s ships and missiles have become immune to the Russian electronic weapons?
Perhaps the whole point of this US attack is not whether it succeeds militarily or not, but rather, that it ignites the seemingly inevitable war with Russia, a very real possibility given that the Kremlin is already extremely angry due to the ludicrous Skripal case and the further provocation of the fake gas attack on the civilians of Douma.
Perhaps the US intent is to provoke the Russians into sinking the Donald Cook in order to be able to propagandise the event and turn it into a cassus belli for war – shades of the sinking of the USS Maine and the subsequent Spanish-American War, the Gulf of Tonkin Incident that lead to the Vietnam fiasco or a number of other incidents which lead directly to wars. Ian]__________
Al Masdar
Trump says Syrian chemical attack ‘will be met with force’
BEIRUT, LEBANON (1:40 A.M.) – U.S. President Donald Trump announced tonight that he is ready to act with force in response to the reported chemical weapons attack in the Syrian town of Douma.
“We have a lot of options militarily,” Trump would then go on to state, as quoted by Russia Today.
The U.S. President added that he is ready to act without the approval of the United Nations.
Trump previously stated that the Syrian government would “pay a big price” for the reported chemical weapons attack; however, he would not provide more details.
__________
Al Masdar

Potential Syrian military targets for US forces
BEIRUT, LEBANON (1:00 A.M.) – U.S. President Donald Trump has recently warned that the Syrian government will have a “price to pay” for the recent Douma attack that was blamed on their forces in the East Ghouta.
Similar to last year’s U.S. attack, a naval vessel has reportedly moved towards Syria’s territorial waters after leaving the nearby country of Cyprus.
According to reports, the missile destroyer, the U.S.S. Donald Cook, has left Cyprus for Syrian waters.

BREAKING NEWS: USSDonaldCook has deployed off the coast of Syria. Russian fighter jets have begun to harass the vessel with multiple low passes.#Douma
DEVELOPING

Should the U.S. launch their attack in the coming hours, there are probable sites that they will they will target near the Syrian capital city of Damascus.
Among the likely targets for the U.S. forces are the Al-Seen Airport in rural Homs, Mezzeh Airbase in rural Damascus, and the Dumayr Airport in rural Damascus.
These three Syrian military airports are located in near Damascus and are most often used to launch air raids over the East Ghouta region.
Last year, the U.S. Navy fired several tomahawk cruise missiles towards the Al-Seen Airport in rural Homs and it still may be the main target for Washington.
__________
Al Masdar
Trump will decide whether or not to bomb Syria in the next 48 hours
BEIRUT, LEBANON (7:25 P.M.) – US President Donald Trump has said that he will decide whether or not to attack Syrian government targets sometime during the next 24 to 48 hours in response to a suspected chemical attack in the city of Douma.
The American president stated that the decision will come after he has determined who was responsible for the reported attack, be it the Syrian government, Russia, Iran or ‘all of them together.’
‘This is about humanity and it cannot be allowed to happen … nothing is off the table,’ he said in a statement and in response to questions at a public White House briefing.
In April 2017, Trump ordered a selective strike against the Syrian military’s Ash-Shayrat military airport in Homs province in response to an alleged gas attack by government forces against the town of Khan Sheikhoun.

This headline says a lot

US Says No Evidence Assad Behind Chemical Attack; But Will Retaliate Regardless Of UN Decision