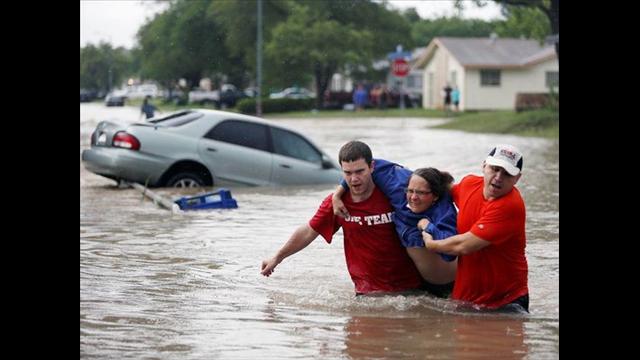 Two women died after being swept away by floodwaters when weekend rains swamped roads throughout San Antonio, forcing more than 235 rescues by emergency workers who sometimes used inflatable boats to help stranded drivers and residents.

At least one teenage boy also was reported missing after Saturday's torrential rains, apparently swept away as he tried to cross the swollen Cibolo Creek in the town of Schertz, a San Antonio suburb, according to the Associated Press.

The National Weather Service said the flash-flood threat would persist until late Sunday morning though mostly cloudy weather with occasional thunderstorms and showers was expected to give way to partly sunny skies later in the day. Forecasters were also keeping an eye on a potential storm system that could bring up to four more inches of rain, further swelling local streams and rivers, according to the San Antonio Express-News.

Memorial Day was expected to be mostly sunny.

The rains that fell on San Antonio Saturday left more than 200 residents stranded in cars and homes when water suddenly rose as high as 4 feet in some locations. There were also significant traffic jams.

"It was pretty crazy," Gera Hinojosa, a valet parking cars downtown after the storm, told the AP. "It was pretty unexpected. We hardly got any warning about it."

San Antonio Fire Department spokesman Christian Bove told the AP that a 29-year-old woman was trapped in her car, got on the roof and was swept away in floodwaters. Her body was later recovered lying against a fence.

A second woman's body was recovered hours after her car was swept away as firefighters tried to save her. The rising waters rolled the car over before they could pull the 60-year-old woman free, the Express-News reported.

"They were in the midst of getting her out when the currents changed and washed that vehicle away," San Antonio Fire Chief Charles Hood told KSAT 12 News.

Saturday evening for those living along the San Antonio River, which was expected to crest around 60 feet sometime early Sunday morning and to recede sometime Sunday afternoon.

By Saturday afternoon, San Antonio International Airport had recorded nearly 10 inches of rain since midnight. The highest amount reported in that same time frame was 15.5 inches at Olmos Creek at Dresden Drive. Nearly all streams and rivers in the area are flooded as a result of the heavy rains.

Saturday marks the second-wettest day ever recorded in San Antonio. The wettest day on record is Oct. 17, 1998, when 11.62 inches of rain fell. In that flood, the Guadalupe and San Antonio River basins overflowed, leaving more than 30 people dead, according to the Guadalupe-Blanco River Authority.

The 1998 record is likely to stand as the heavy rains have moved east of the city. (Because the gauge at Olmos Creek is not an official weather station, the National Weather Service does not consider it to be a record.)

By Saturday evening, the water was receding in much of San Antonio. However, pools of water could still be seen in some low-lying areas. And several roads were closed, including a major highway that links the suburbs and the city. Mayor Julian Castro urged motorists to stay off roads.

"Many roads throughout the city continue to be impassable and dangerous," he said in a statement. "Just because it's not raining at the moment, does not mean that the threat has passed."

It is not known how much the rainfall will impact drought in the region because much of it will run off into creeks and rivers, NWS meteorologist Pat McDonald told the Express-News.

"Hopefully, it will help, but it will take us a week or two weeks for all the data to come in," he said. "It depends on how much soaks into the aquifer."