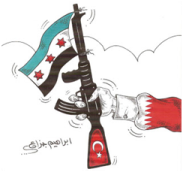 The threat of joining terrorist and extremist groups by young Tajik citizens has become the reason of the decision to bring students studying at religious education institutions abroad back to the home country. Otherwise, the circumstances would be irreversible, Melikov believes.
…

Two Kyrgyzstanis recruited for Syria return home
Preventive and precautionary measures aimed at preventing involvement of citizens of the Kyrgyz Republic in extremist and terrorist activities, and participation in armed clashes in Syria and other countries in the Middle East continue. At the same time GKNB is working on identification of traffickers and recruiters.
…

We probably shouldn’t wait for an investigation to expose the culprits as long as this could damage certain business relations.

Rising radicalism in Syria and the unstable situation in Afghanistan prompted Russia’s military intelligence agency, the GRU, to warn of an increasing terror threat. Many foreign militants fighting in Syria are from the Russian republic of Chechnya [emphasis mine]:

12 Chechen fighters killed in central Syria: activists
The Syrian government has long been charging that foreign fighters are joining the battles alongside the opposition rebels, accusing regional countries, such as Turkey, of facilitating the flow of those jihadists into Syria.
…

So there is reasonable concern in Russia that the Syrian crisis could reach the Caucasus [emphasis mine]:

Syrian crisis rapidly spreads and can affect the Caucasus
Pushkov does not exclude that “terrorism can come to those states where it never existed previously. So I would not want the states of the southern Caucasus to become involved in this terrorist activity, but it could happen. Because total destabilization leads to a situation where some people, especially with the funding of certain fundamentalist groups that are growing by leaps and bounds, on oil and gas in a number of Arab states, may have an idea, but why not try to support extremist tendencies in a particular country in the region, say, in Azerbaijan. I think that’s what is dangerous about the Syrian crisis – it can, like cancer, metastasise into other countries.

Using Azerbaijan as a hub for operations aimed at destabilizing Russia is not exactly a new phenomena. But Russia is of course not the only target in the region:

South Azerbaijan is a region in northwestern Iran and groups like the Southern Azerbaijan National Awakening Movement fight for its “liberation”. SANAM recently celebrated the 95th anniversary of Azerbaijan’s independence in the country’s embassy in Washington with John Kerry and Dana Rohrabacher, who has been campaigning extensively for oppressed minorities in Iran andPakistan.
Coincidentally, Washington now also hosts the new office of the MKO, which is thefavorite terror cult of the U.S. government and was therefore removed from the listof foreign terrorist organizations.

The North Atlantic Treaty Organization stressed this week that Azerbaijan is an “extremely important part of NATO” with the cooperation focusing not only on areas like security and military reform but especially on the energy sector:

Conference on security highlights Azerbaijan’s role as NATO partner
According to the US ambassador to Azerbaijan, Azerbaijan will play an even more important role in ensuring the European Union’s security after the consortium developing the giant Shah Deniz gas condensate field located in Azerbaijan’s sector of the Caspian Sea makes a final decision on the gas transportation route to Europe.

“Beyond opening a new pipeline, Azerbaijani gas will become even more important for European energy supplies,” Morningstar told journalists. The Shah Deniz consortium is considering the Trans Adriatic Pipeline (TAP) and Nabucco West pipeline route for gas export. The consortium will make its final decision in June and a final investment decision by October 2013.

Building a Trans-Caspian pipeline from Turkmenistan to Azerbaijan, which would bypass Russia and Iran, is the biggest dream of the United States:

Azerbaijan and Turkmenistan have the right to lay the Trans-Caspian pipeline and the U.S. in general agrees with it.

The Trans-Caspian Gas Pipeline running around 300 kilometers will be laid from the Turkmen coast of the Caspian Sea to Azerbaijan, where it will be linked to the Southern Gas Corridor. The pipeline’s capacity is 30-40 billion cubic meters of gas per year.

Iran and Russia expressed their negative attitude towards the project. Tehran and Moscow think the pipeline construction may damage the Caspian Sea’s ecology.
…
Turkmenistan’s Galkynysh gas field is the second largest in the world after the South Pars field and will be launched on June 30th. China is expected to become one of the biggest customers:

China to Get Gas From Turkmenistan’s Giant Field
The Galkynysh field, the world’s second largest by gas reserves, will be used to build up Turkmen gas exports to China. The field is expected to produce 25 billion cubic meters of natural gas per year for China, with Turkmenistan’s total gas exports to China planned to reach 65 billion cubic meters annually after the field’s launch, Abdullayev said at the fourth international gas congress held by Turkmenistan.
…

It is, however, highly doubtful if the Trans-Caspian pipeline will be built and Turkmen gas will reach the EU via Azerbaijan. Turkmenistan is definitely interested in the project but there is one major problem [emphasis mine]:
Pipelines: Making War?

Our respected colleague Mikhail Korchemkin of East European Gas Analysisbrought to our attention an intriguing comment contained within the The April issue of Blue Fuel newsletter of Gazprom-Export Global Newsletter.

In the article on Page 12, Russian Foundation for Energy Security Director Kostantin Simonov, is quoted as saying:

“The construction of this pipeline would mean to spit in the face of Russiaand the real risk may be that of a military conflict, in front of which Russia will not pull back.”

As Mikhail commented: “It does look like the state-controlled Russian giant threatens war with Azerbaijan and Turkmenistan over the pipeline project; doesn’t it”?

…
NATO pivot to the Caspian Sea

But Russia’s concern regarding the Caspian Sea is not limited to pipelines:

The Caspian region is a hub of tensions
Russia fears the establishment of NATO military bases in the Caspian Region after the withdrawal of the coalition from Afghanistan in 2014 under the pretence of providing regional security. This view was voiced by the head of the Caspian Cooperation Institute Sergey Mikheyev.

Mikheyev goes on to explain why NATO is interested in the region [emphasis mine]:

“We believe that the Caspian region is more and more becoming a node where tension lines of the European continent meet. Apparently, geopolitical interests of many players are crossed here: serious oil and gas resources are concentrated here.“
…
Since Kyrgyzstan wants to cancel the current agreement with the U.S. on the Manas air base and is moving closer to Moscow, the United States and its allies are turning their attention to other Central Asian countries. The prospect of a U.S. military base in Uzbekistan was already mentioned in the last Round Up.

Furthermore, American and British companies are looking to cooperate withUzbekistan as well as Kazakhstan in the energy sector and while the CIA’s Jamestown Foundation was still celebrating the Kazakh proposal:

The primary suspect to host an American military base in the Caspian region, Azerbaijan, rejectedthis immediately and is even having second thoughts about its NATO membership:

Azerbaijan Will Not Join NATO, CSTO Says Aide
Azerbaijan will join neither NATO nor the Russia-led Collective Security Treaty Organization (CSTO), but is prepared to cooperate with both, a presidential aide said on Friday.

That does not mean Azerbaijan will not alter its position in the future, he added.
“If Azerbaijan’s national interests require membership of those organizations the country could become a member of NATO or even the CSTO – or remain neutral,” Gasanov said.
…

But we shouldn’t overestimate this statement. The NATO-Azerbaijan relationship is as close as ever and eventually Azerbaijan will take the same path as neighboring Georgia:

Development Strategy of Georgian Armed Forces until 2016 defined
According to the document, accession into NATO is the main priority of Georgia’s foreign and security policy.

Gülen schools in the South Caucasus

Two attendees of the Security Symposium also want to strengthen their cooperation in the field of education:

Azerbaijan and Turkey to actively develop cooperation in education

The question is if this cooperation includes more Gülen schools, which are already flourishing in Georgia. Russia and other countries have banned all schools connected to the Gülen movement and there is a good reason for this. Fethullah Gülen and his CIA-funded movement play a central role in the Pentagon’s Gladio B operations:

Turkish Intel Chief Exposes CIA Operations via Islamic Group in Central Asia
The Russian government has banned all Gülen schools and the activities of the Nur sect in Russia. Over 20 Turkish followers of Gulen were deported from Russia in 2002-2004.

In 1999 Uzbekistan closed all Gulen’s Madrasas and shortly afterward arrested eight journalists who were graduates of Gulen schools, and found them guilty of setting up an illegal religious group and of involvement in an extremist organization.
…
Additional Omitted Points in CIA-Gulen coverage & A Note from ‘The Insider’
One of the attending Gulen school owners owned and operated 18 schools for Gulen in Uzbekistan. The CIA operation disguised under ‘Teaching English’ at these 18 schools in Uzbekistan consisted of 70 CIA operatives, operating under a project named ‘Friendship Bridge’ (Operation Code Name). The operatives also submitted reports to a certain arm of the Pentagon.

The same operation (name not mentioned) had 60 American-CIA operatives as English teachers in Kyrgyzstan; again carrying US Diplomatic Passports.