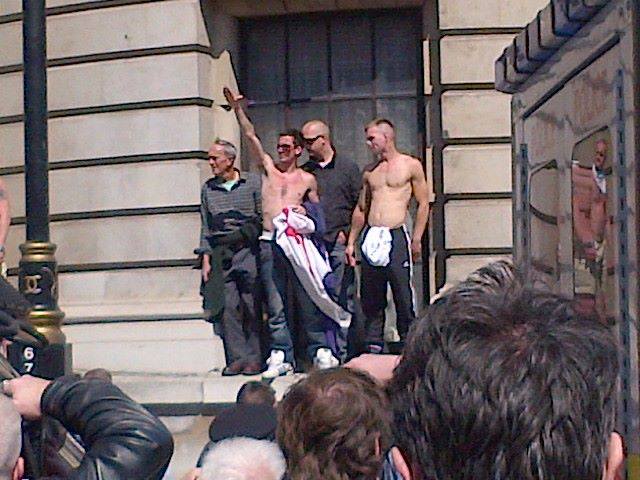 Things are getting pretty ugly in Britain since the Woolwich attack last week.

Britain has disrupted negotiations within the EU so it can send weapons to the very Jihadist forces that carried out the attack in London; Iain Duncan Smith is wanting to rob the people so that he can pay for his military adventures.

In the meantime there have been 10 attacks on mosques withiin Britain and 63% of Britons polled would favour a return of the death penalty for “terrorism”.

To put it in context – a poor black man is beaten to death by racists and it doesn't even warrant media attention; one soldier is killed by black men, and it is terrorism and provides the pretext to suppress human rights, introduce a “snoop's charter” - and releases the fascist mobs onto the streets.

Here are some of the headlines within the last 24 hours or so. 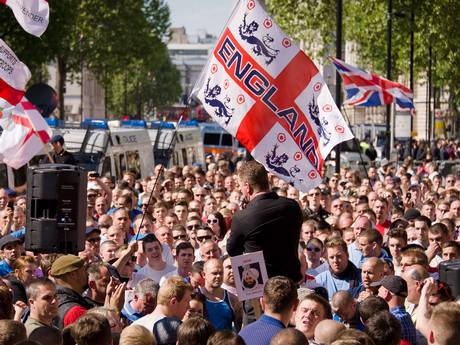 'The enemy is everywhere': Former MI5 head calls for people to spy on their neighbours following murder of soldier Lee Rigby
Dame Stella Rimington said members of the public have to be the Government's 'eyes and ears'

63% back death penalty for terror

Iain Duncan Smith: cut welfare to fund police and Forces
Iain Duncan Smith has offered to cut Britain’s welfare Bill by up to another £3  billion annually to protect spending on the Armed Forces and police, The Daily Telegraph can disclose. 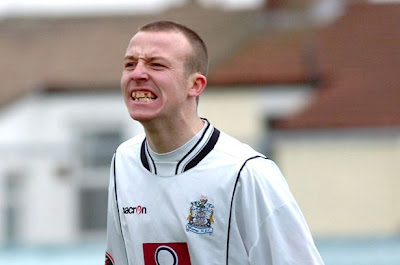 the face if fascism

Shaun Tuck: Police probe footballer who encouraged riots and bomb attacks on mosques
The non-league striker called for Muslim children to be beheaded in apparent revenge for the street killing of Drummer Lee Rigby

Ten attacks on mosques since Woolwich murder
As the number of Islamophobic incidents continues to increase, EDL raises temperature with London march

Around 1,000 EDL members took part in the demonstration which was meant to pay respects to the murdered British soldier Lee Rigby. The march went down Whitehall to Downing Street, and video footage shows some protesters doing Nazi salutes.

One police officer was treated for injuries at the scene after being hit with a bottle in Monday's clashes. The demonstrators chanted "Muslim killers off our streets!" while Metropolitan Police officers escorted them through London. EDL leader Tommy Robinson stood on a barrier attempting to calm the crowd down.

Lee Rigby was run down by a vehicle before allegedly being fatally attacked by two assailants with knives and meat-cleavers in full public view. The two alleged perpetrators, Michael Adebolajo and Michael Adelowale, were filmed by eyewitnesses at the scene and video footage shows them holding their weapons with bloodied hands, waiting for police to arrive.

When the police arrived the perpetrators attempted to confront them before being shot. One of them was reported to have been carrying a firearm in what the UK government labelled an act of domestic terrorism. Home Secretary Theresa May has on Monday floated plans to crack down on radical Islamic groups.

The UK Prime Minister has announced an anti-terror task force to clamp down on the "poisonous narratives" of radical preachers who target recruits in schools, jails and mosques. However, some fear the government’s efforts could actually worsen extremism.

According to the Daily Mail, the unit was launched by Prime Minister David Cameron in the wake of the brutal murder of Lee Rigby, a 25-year-old drummer in the British Army. Rigby was beheaded in southeast London’s Woolwich neighborhood by two men who said the murder was motivated by the UK’s involvement in the Afghanistan and Iraq wars.

“We are looking at the range of powers and current methods of dealing with extremism at its root, as opposed to just tackling criminal violent extremism. And we will look at ways of disrupting individuals who may be influential in fostering extremism. We cannot allow a situation to continue where extremist clerics go around this country inciting young people to commit terrorist acts. We will do everything we can to stop it,” an unidentified source told the Daily Mail.

TERFOR will study a number of young people who have become radicalized, like Rigby’s murderers, the newspaper reported. The source stressed that “there is no question of restricting freedom of speech – this is about preventing people spreading the message of extremism and radicalization in a totally irresponsible and reckless way.”

'Malicious communications' and 'racial or religious hatred' on the rise

As the crackdown on the preaching of violent extremism continues, some British citizens have taken the law into their own hands – the country has recently seen a spike in Islamophobia, manifested in violent anti-Islamic attacks, protests and even arson. 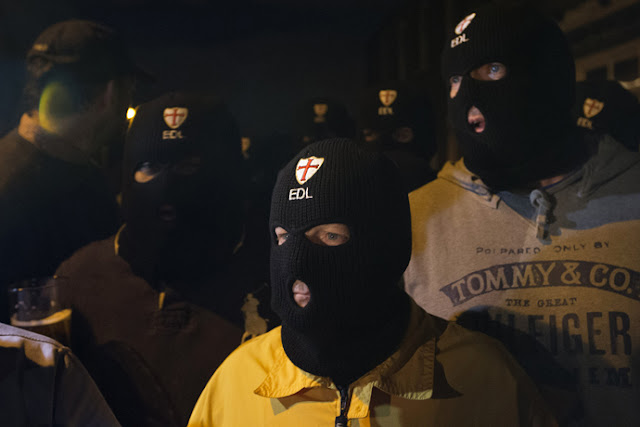 Members of the English Defence League (EDL) wear balaclavas as they gather outside a pub in Woolwich in London on May 22, 2013 after a man believed to be a serving British soldier was brutally murdered nearby in what Prime Minister David Cameron said appeared to be a terrorist attack (AFP Photo / Justin Tallis)


Two men were arrested on Monday for starting a fire at a mosque in an Islamic district of the northeastern seaport of Grimsby late Sunday night.
“We had just finished our prayers and were discussing how to thank our neighbors for the support they have shown us over the past few days when we heard a bang and saw fire coming under the door,” Islamic Cultural Center Chair Diler Gharib told the Grimsby Telegraph.
“I grabbed a fire extinguisher and put it out and then two more petrol bombs hit the fire escape and the bin so I had to put those out too.”
A similar attack was preempted in the southeastern seaside town of Hastings when an English Defense League (EDL) activist took to Facebook to declare “the [Hastings] mosque needs burning down.” He was told on Monday that he could face jail for the inflammatory message, which urged fellow EDL members to participate in a “flash demo.”
Two further arrests were made on Monday, when protesters in Walsall, near the central UK city of Birmingham, were charged with racially aggravated public order offenses. Around 20 people had clustered in the town center, draped in St. George flags. They were believed to be EDL members, according to local press. 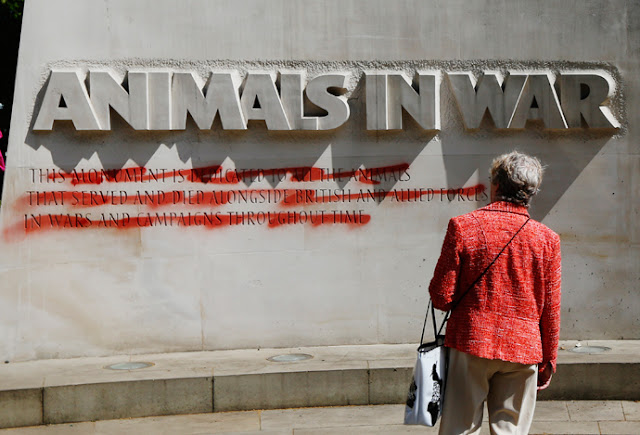 A woman looks at the "Animals at War" memorial, which has been defaced with red paint, in central London May 27, 2013 (Reuters / Luke MacGregor)

British religious campaign group Faith Matters released a statement reporting a leap in anti-Islamic violence:“We have received 162 calls since Wednesday [Rigby’s death], up from a daily average of four to six. Eight mosques have been attacked to date.”  “The news has left many Muslims here saying that they are afraid to leave their houses,” reported RT's Polly Boiko from London. “Community leaders are saying that they are concerned about the spread of the incidents,” she continued.
The EDL has publicly stated that the killing demonstrates Britain is “at war” with Islamic extremism. Marches in Newcastle over the weekend drew somewhere between 1,500 and 2,000 people. The demonstrators reportedly shouted,“Whose streets? Our streets” and “RIP Lee Rigby.”
The EDL has planned another demonstration for Monday in central London, near the office of UK Prime Minister David Cameron.
The British National Party (BNP) also held a protest in Woolwich on Saturday, dubbed 'United Against Muslim Terror.'
Eleven people across the UK were arrested for making racist or anti-religious comments on social media, according to the Daily Mail. Nearly two-thirds of Britons believe there will be a clash between the Muslim population of the UK and the white non-Muslim population, according to a YouGov poll published on Saturday, which also showed that expectations of a serious clash rose 9 points to 59 percent.
The number of respondents who believe Muslims pose a serious threat to democracy stands at 34 percent, up from 30 percent in November 2012. However, two-thirds of the YouGov respondents declared that they felt negatively about protests led by the EDL and BNP, and 84 percent said they would never join the EDL.
The Woolwich brutality could lead to long-lasting damage to inter-community relations, Deputy Prime Minister Nick Clegg said in a speech on Saturday:“Fear is an extraordinarily powerful emotion and when it takes root.” 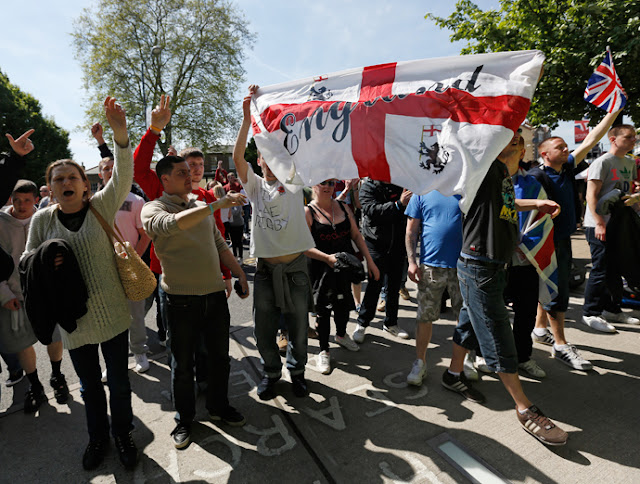 Demonstrators protest against the killing of British soldier Lee Rigby, outside the Woolwich barracks in southeast London May 26, 2013 (Reuters / Olivia Harris)

Terror videos a hit on the Internet

While Cameron asks UK Muslims to be more proactive in condemning Islamist terrorism, there are hundreds of videos promoting terror and telling British Muslims to wage jihad available on the Internet, including Al-Qaeda training videos and sermons.

Google chief Eric Schmidt, whose company owns YouTube, believes some of the videos could help intelligence services and police track down potential terrorists. “We have taken the decision that information, if it’s legal, even if it’s despicable, will be indexed,” Schmidt said during the Hay literary festival.  UK Home Secretary

Theresa May said on Sunday that it is “essential” to grant intelligence agencies the capacity to access communications data, despite overwhelming opposition to the Draft Communications Data Bill revealed last year.

The bill – widely known as the ‘snooper’s charter’ – would have given agencies, including police and intelligence services, access to information and data collection by Internet service providers, including web browsing histories, social media messages and online gaming, storing them all for 12 months.

Shortly after the killing last week, UK authorities slammed the media for giving airtime to radical cleric Anjem Choudary, who refused to condemn the attack. "A mistake of the BBC to invite Anjem Choudary onto the telly tonight," shadow Defense Secretary Jim Murphy wrote on Twitter.

The Muslim Council of Britain (MCB) has decried Rigby’s murder in a statement on its website, saying that “after Woolwich, we understand the Prime Minister needs an effective strategy in the face of such a horrific instance of extremism.”

“The killers of Drummer Lee Rigby attempted to sow division amongst Britons through the propaganda of their deed. Yet in large numbers, British Muslims stood up and declared loudly and clearly that this murder was not in our name,” the MCB said. 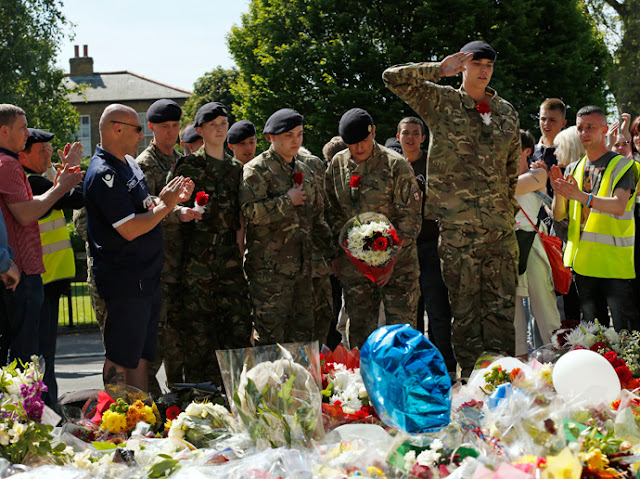 However, the group went on to stress that it still hoped “wisdom prevails” in how the government handles the issue.