Woolwich attack: Anti-fascist groups plan counter-demos as EDL marches go national
Anti-fascist campaigners are preparing to oppose the English Defence League in up to a dozen towns and cities across the country this weekend, as the far-right group stages a series of demonstrations following the killing of Drummer Lee Rigby in Woolwich. 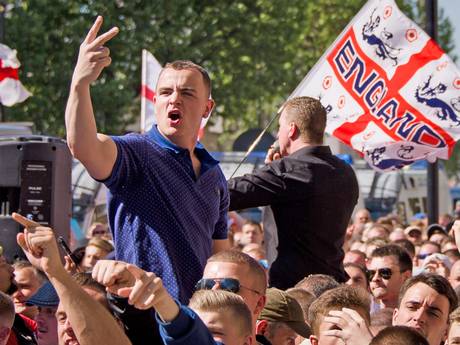 The EDL is planning protests in at least 30 locations on Saturday afternoon, after the group’s leadership called for localised events rather than a national demonstration. Anti-EDL campaigners told The Independent that they had identified “10 or 12” of these locations for counter-demos, with Leeds their priority.

The EDL’s plans emerged after members of the “hacktivist” group Anonymous launched a campaign against the anti-Islamic group. Anonymous members leaked personal information it said belonged to EDL donors and members on Tuesday and promised a further leak last night, with more to follow in the near future.

The far-right group’s co-founder Stephen Lennon, also known as Tommy Robinson, has asked EDL members to march in silence this weekend. He has called on them to lay wreaths at memorials and instructed them not to carry banners or drink alcohol while marching, following violent scenes in London on Monday.

Plans for many events were published online today. Most of England’s major cities are represented but, in many towns, only a handful of people have currently stated their intention to attend.

Matthew Collins of anti-fascist group Hope not Hate said he believed that the decision to localise the demonstration was part of a plan to draw attention away from a simultaneous march planned in London by the British National Party, with whom the EDL leadership has clashed in the past.

He added: “Tommy Robinson has got off his political deathbed. The EDL was as good as dead last week. Lennon had lost all respect from what was left of his gang.”

An Acpo spokesman said: “Police are aware of a number of demonstrations planned for this weekend. Forces across the country will be working closely with local communities as always to ensure these pass off with minimum disruption. While we will do all we can to facilitate peaceful protest, those taking part should be clear that the police will uphold the law.”

West Yorkshire Police said it was not aware of a large-scale planned action by either the EDL or its opponents but would be looking at putting plans in place between now and Saturday.

Members of the Anonymous team leading the attack on the EDL said they decided to act because the anti-Islamic group was “ capitalising” on the death of Drummer Rigby.

Speaking to The Independent, they said it was also in retaliation for the EDL’s treatment of Muslims.

“I’ve seen their treatment to Muslims in my own town and I want to do something about it, and raise awareness of it,” said one member.

A 21-year-old man arrested over the stabbing of a French soldier near Paris on Saturday admitted to the crime, officials said. The suspect is a Muslim convert who "wanted to attack a representative of the state", said prosecutor Francois Molins.

Police arrested the man in Yvelines, 45km south-west of the capital.

Police asked for more information about Lee Rigby’s murder after confirming that he died of multiple wounds. An inquest into the solider’s death will open at Southwark Crown Court on Friday.

Three officers who shot suspects Michael Adebowale and Michael Adebolajo could be back on duty within weeks. Adebowale was discharged from hospital yesterday and taken into police custody. Adebolajo remains in hospital.

Witness returns to scene of attack

Ingrid Loyau-Kennett, who has been praised for her bravery after calmly talking to one of the Woolwich attackers as he stood clutching a knife with bloodied hands, has returned to the scene of the killing.

Gesturing to the piles of floral tributes to Drummer Lee Rigby, she said: “It’s the public displaying their shock and showing that they are behind the British Army and the soldiers and that this is something they will not accept.”

Posted by seemorerocks at 13:31