This information seems to have been buried by the makers of the 2005 documentary.


Why the Sun seems to be 'dimming' 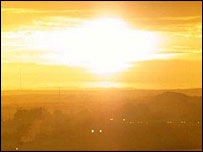 We are all seeing rather less of the Sun, according to scientists who have been looking at five decades of sunlight measurements.


They have reached the disturbing conclusion that the amount of solar energy reaching the Earth's surface has been gradually falling.

Paradoxically, the decline in sunlight may mean that global warming is a far greater threat to society than previously thought.

The effect was first spotted by Gerry Stanhill, an English scientist working in Israel.

Comparing Israeli sunlight records from the 1950s with current ones, Dr Stanhill was astonished to find a large fall in solar radiation.

"There was a staggering 22% drop in the sunlight, and that really amazed me." Intrigued, he searched records from all around the world, and found the same story almost everywhere he looked.

Although the effect varied greatly from place to place, overall the decline amounted to one to two per cent globally every decade between the 1950s and the 1990s.

Dr Stanhill called it "global dimming", but his research, published in 2001, met a sceptical response from other scientists.

It was only recently, when his conclusions were confirmed by Australian scientists using a completely different method to estimate solar radiation, that climate scientists at last woke up to the reality of global dimming.

Dimming appears to be caused by air pollution.


Burning coal, oil and wood, whether in cars, power stations or cooking fires, produces not only invisible carbon dioxide - the principal greenhouse gas responsible for global warming - but also tiny airborne particles of soot, ash, sulphur compounds and other pollutants.

This visible air pollution reflects sunlight back into space, preventing it reaching the surface. But the pollution also changes the optical properties of clouds.
Because the particles seed the formation of water droplets, polluted clouds contain a larger number of droplets than unpolluted clouds.

Recent research shows that this makes them more reflective than they would otherwise be, again reflecting the Sun's rays back into space.

Scientists are now worried that dimming, by shielding the oceans from the full power of the Sun, may be disrupting the pattern of the world's rainfall.

There are suggestions that dimming was behind the droughts in sub-Saharan Africa which claimed hundreds of thousands of lives in the 1970s and 80s.

There are disturbing hints the same thing may be happening today in Asia, home to half the world's population.

"My main concern is global dimming is also having a detrimental impact on the Asian monsoon," says Professor Veerhabhadran Ramanathan, professor of climate and atmospheric sciences at the University of California, San Diego. "We are talking about billions of people."

But perhaps the most alarming aspect of global dimming is that it may have led scientists to underestimate the true power of the greenhouse effect.

They know how much extra energy is being trapped in the Earth's atmosphere by the extra carbon dioxide we have placed there.

What has been surprising is that this extra energy has so far resulted in a temperature rise of just 0.6 degree Celsius.

This has led many scientists to conclude that the present-day climate is less sensitive to the effects of carbon dioxide than it was, say, during the ice age, when a similar rise in CO2 led to a temperature rise of six degrees Celsius.


But it now appears the warming from greenhouse gases has been offset by a strong cooling effect from dimming - in effect two of our pollutants have been cancelling each other out.

This means that the climate may in fact be more sensitive to the greenhouse effect than previously thought.

If so, then this is bad news, according to Dr Peter Cox, one of the world's leading climate modellers.

As things stand, CO2 levels are projected to rise strongly over coming decades, whereas there are encouraging signs that particle pollution is at last being brought under control.

"That means we'll get reducing cooling and increased heating at the same time and that's a problem for us," says Dr Cox.

Even the most pessimistic forecasts of global warming may now have to be drastically revised upwards.

That means a temperature rise of 10 degrees Celsius by 2100 could be on the cards, giving the UK a climate like that of North Africa, and rendering many parts of the world uninhabitable.

That is unless we act urgently to curb our emissions of greenhouse gases.