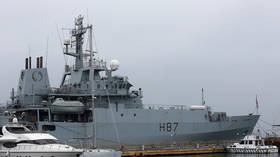 
A deputy minister in Kiev suggested that the British Navy should send its warship to the Sea of Azov to test Russia’s response. Moscow described the idea as ‘bonkers.’

“When it is being said that Russia won’t allow the passage of a British ship, I have one remark – has anyone tried it?” Yuri Hrymchak wondered during a talk show aired live on a Ukrainian TV channel on Friday.

Hrymchak serves as deputy minister of temporarily occupied territories and internally displaced persons – a department tasked with facilitating the ‘future return’ of Crimea from Russia to Ukraine. He was discussing last month’s naval standoff near the Kerch Strait.

On November 25, the Russian Coast Guard intercepted and seized two Ukrainian gunboats and a tugboat. Moscow accused the sailors of trying to enter the busy strait, connecting the Black Sea with the Sea of Azov, while violating existing navigational procedures. In response, Ukraine accused Russia of unprovoked aggression against its vessels.

Since the Royal Navy hydrographic survey ship, HMS ‘Echo’ has no weapons on board, it is not bound by international regulations, which limit the activity of navies belonging to non-Black Sea states in the region, Deputy Minister Hrymchak argued.

HMS Echo@HMS_Echo
Apparently the news might be out that we've been in Ukraine... It was a great pleasure to assist @UKinUkraine during the visit by Secretary of State for Defence @GavinWilliamson.
198
23:59 - 22 дек. 2018 г.

77 человек(а) говорят об этом
Информация о рекламе в Твиттере и конфиденциальность
“And it would be interesting to see how will [the Russians] would react if this ship sailed in a caravan” through the Kerch Strait, the Ukrainian official said. It is not entirely clear how serious he was about this idea.

Nevertheless, officials in Moscow blasted the suggestion as being out of touch with reality. It indicates “how dangerous the current regime in Kiev is for the world,” Russian Senator Frants Klintsevich said.

“This regime is descending deeper into a maniacal condition,” he added.

HMS ‘Echo’ was deployed to the Black Sea earlier this week. The vessel paid a visit to the port of Odessa, which hosts a Ukrainian naval base. The ship itself was visited by Secretary of State for Defense Gavin Williamson during his trip to the nation.