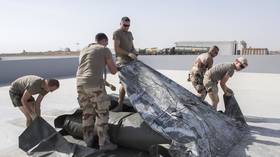 US troops pulling out of Syria have been manning several of France’s bases there, Turkish state media reported, while exposing locations of 9 French-occupied sites. It implied that Paris soon won’t be able to defend Syrian Kurds.

There are at least nine French bases scattered across northern Syria, according to the investigation carried out by Anadolu Agency. France apparently expanded its presence since March, when the media counted only five French military facilities.

At least four of the French bases in northern Syria are also manned by the withdrawing US troops, the report says. The other five would also be left more vulnerable since France can only “ensure their continued mobility by relying on” US troops or YPG militia for support.

“Under current circumstances, France does not seem to be able to provide a similar level of support to the YPG / PKK by filling the gap that will arise from the withdrawal of the US from Syria,” it adds.

UK Defence Secretary Gavin Williamson has given a wildly optimistic interview, in which he harked back to the historic influence enjoyed by Britain, and promised to build two foreign military bases “in a couple of years.”

“We have got to be so much more optimistic about our future as we exit the European Union,” the Conservative Party minister told the Sunday Telegraph.

“This is our biggest moment as a nation since the end of the Second World War, when we can recast ourselves in a different way, we can actually play the role on the world stage that the world expects us to play.”

Over the past 24 hours, members of illegal armed groups violated ceasefire regime in 20 areas in Syria's Idlib de-escalation zone, the Russian Defence Ministry said in a statement on Sunday

Outgoing White House Chief of Staff John Kelly, in an interview published in the Los Angeles Times on Sunday, detailed that US President Donald Trump is not pushing for a concrete wall but is only seeking a barrier as a means of tackling illegal immigration.

"The President Is Reconsidering": Syria Pullout On Thin Ice After Lunch With Lindsey Graham

President Trump is "reconsidering" his strategy to pull US forces out of Syria following an "eye-opening trip to Iraq" the day after Christmas, Bloomberg reports.

Sen. Lindsey Graham (R-SC) who sits on the Senate Armed Forces Committee - a harsh critic of Trump's announced pullout, said earlier Sunday that he would try to change Trump's mind during a private lunch since the Islamic state isn't quite defeated in the region as the President had previously stated.


"I feel better about Syria than I felt before I had lunch," said Graham after he left the White House. "I think the president is taking this really seriously, and the trip to Iraq was well timed." Trump has apparently devised a strategy with his generals in the field that "makes sense" according to the Senator.

Even as the US president is inundated with a constant barrage of criticism for his efforts to halt illegal immigration, the UK is stepping up its own efforts at undoing Merkel's 2015 "open door" policies and curbing the flow of illegal migrants shuttling across Europe.

According to EFE, the French interior minister and his United Kingdom counterpart are launching a joint effort to curb the number of migrants attempting to cross the English Channel, the sea separating southern England and Northern France.

On Friday 12 people were detained in two boats off the Dover coast: all but one, a Syrian, came from Iran. At least 220 people have attempted the 21-mile crossing in rubber dinghies and small boats. In one incident last month, a group of 17 migrants stole a fishing boat from a French port and sailed across to Dover.

Morning delays at airport following system outage and storm flow-on
Here are all the guns confiscated by TSA at airports Dec. 10-16
Airline double standards over violent, drunken passengers
Disruptive incidents on flights have doubled, with Ryanair worst affected
US Air Travel May Get More Expensive As $100b Is Spent On Airport Infrastructure
California Pacific Airlines Cancels Flights Due to Pilot Shortage

## Migrants/refugees ##
While the US debates caravans and wall, thousands of migrants are dumped in border cities
Arizona churches working to help migrants are 'at capacity' or 'tapped out on resources'
Sajid Javid: Channel migrant crossings 'a major incident'
Massive New Migrant Caravan To Leave Honduras; Overloaded El Paso Faces Imminent "Crisis"
People naturally want to move to where the grass looks greener. We can't blame them. But looking to the future, as the global economy — including the US economy — continues to deteriorate, migrants are going to become targets for "stealing" the natives' jobs. It's going to get very ugly. -- RF
Boat with 300 migrants arrives in Spain after week at sea

## Energy/resources ##
The EU's palm oil policy is triggering condemnation from the other side of the globe
The Mediterranean Pipeline Wars Are Heating Up
Oil watchers see $70/bbl in 2019 as recession fears fade
The price couldn't stay there long because petroleum products would be unaffordable to many people. -- RF
Disaster emergency declared in Colorado for propane shortage
Mexican Army Starts Major Crackdown On Fuel Theft
Oil Tanker Firms Scrap Most Ships In Three Decades

## Environment/health ##
A report by the NIH Clinical Center shows how stealthy multi-drug-resistant bacteria can be
Esports players are burning out in their 20s
Greenland's Rapid Ice Melt Persists Even in Winter, Study Finds
Trump EPA Says Mercury Limits On Coal Plants Too Costly, Not 'Necessary'
Two employees fired from facility that may have exposed thousands to HIV, hepatitis
FDA Holds Meeting to Identify Cause of Drug Shortages
The US Food and Drug Administration (FDA) is working to update its approach to drug shortages after several high-profile manufacturing-related shortages over the last year.
Philippines becoming a rich world dumping ground
Discovery of over 5,000 tons of South Korean hazardous waste on the Philippine island of Mindanao marks a rising trend of illegal foreign dumping on the island nation.
10 Costliest Climate-Driven Extreme Weather Events of 2018 Caused at Least $84.8B in Damage: Analysis
Plastic Water Bottles, Which Enabled a Drinks Boom, Now Threaten a Crisis
How mountains of U.S. plastic waste ended up in Malaysia, broken down by workers for $10 a day

## Propaganda/censorship/fake news/alternative facts ##
A Reuters Report on Iran That Fueled US Diatribes
This year, U.S. Secretary of State Mike Pompeo made speeches about corruption and property confiscation in Iran that borrowed animating details from a skewed, 5-year-old story that is gaining influence.
Wag the Dog... British Media Watchdog Accuses Russia of Bias
On the unbelievable chutzpah of the UK propaganda machine regarding the Skripal affair. -- RF
The Mock Democracy
The citizens are disenfranchised and conditioned to be politically apathetic consumers. In recent decades, democracy has been replaced by the illusion of democracy.

## Systemic breakdown/collapse/unsustainability ##
The Ghost Of Christmas Future — A frightening world awaits unless we change our ways
What collapse is like: Guadalajara Mexico

## UK ##
'Shocking' rise in number of potholes as Britain's roads get worse, says RAC
There has been a “shocking” rise in the number of potholes on British roads with half a million reported to local authorities over 2017, research by the RAC has revealed, an increase of 44 per cent in two years.
UK says rising migrant Channel crossings are a 'major incident'
From changing rooms to public toilets: The dark trend of hidden spy cameras filming women
‘It has grown exponentially in the last five to seven years. Our caseload is going up, which comes from these things being readily easy to buy. Tech can lead people down some dark roads. It is terrifying’

## US ##
Drop in U.S. consumer confidence stokes fears of economic slowdown
Overflowing With Excess Inventory, US Companies Turn To Truck Trailers
US Housing Market to Get Uglier in Near Future