Santa is a no-show? S&P 500, Dow, Nasdaq all plunge ahead of holiday market closure 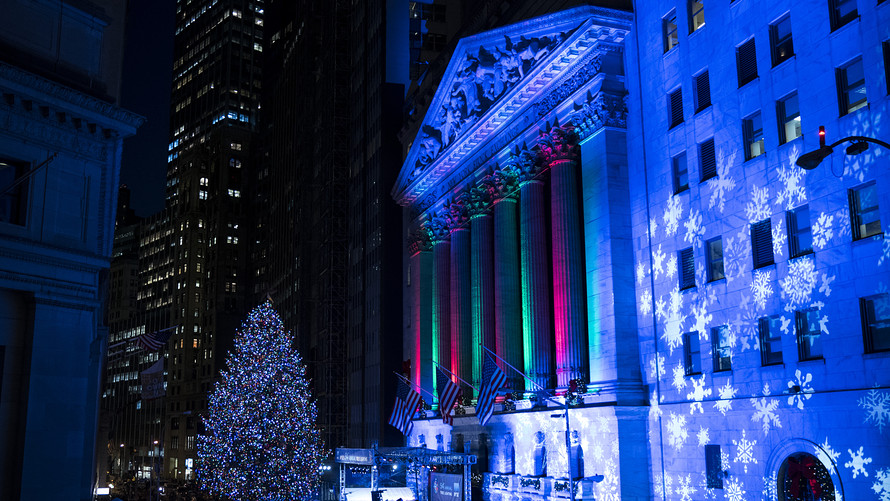 Never mind finding coal in your stocking for the holidays. Wall Street investors scored a rare — and unwanted — gift this year.
The S&P 500 index SPX, -2.71% fell by 2.7% Monday, marking the first session before Christmas that the broad-market benchmark has booked a loss of 1% or greater — ever.
Bespoke Investment Group spotlighted this dubious S&P 500 record earlier in the day:

72 people are talking about this
Twitter Ads info and privacy
That statistic has been confirmed by Dow Jones Market Data, which said the largest decline in the index on the trading day before Christmas was Dec. 23 in 1933.
The following graphic from Bespoke illustrates the index’s moves over the past 90 years or so: 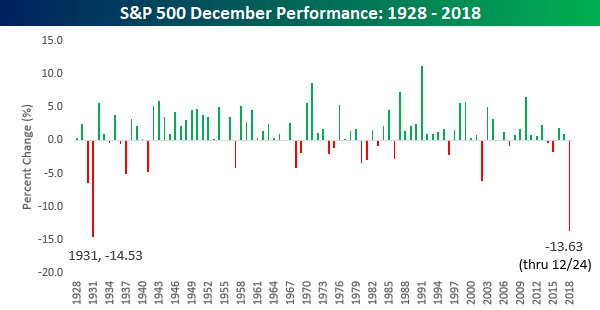 73 people are talking about this
Twitter Ads info and privacy
The Dow Jones Industrial Average DJIA, -2.91% finished down 653 points, or 2.9%, representing its worst decline on the session prior to Christmas in the 122-year-old blue-chip gauge’s history. Check out the table below from Dow Jones Market Data:


It wasn’t pretty for the Nasdaq Composite Index COMP, -2.21% either, with the technology and internet-laden benchmark logging a 2.2% loss. That also marked the worst Christmas Eve, or more aptly, worst drop on the trading session just before Christmas in its shorter history, with the next worst drop the 0.95% decline logged in 1973. The Nasdaq began trading on Feb. 8, 1971.


U.S. stock indexes ended trading at 1 p.m. Eastern Time on Christmas Eve and will be closed on Christmas.
Read: Mnuchin thinks there’s a simple reason the Dow is poised for its worst December since 1931
Read: Which stock and bond markets close, and when, for Christmas and New Year’s holidays
The current dynamic in the market has it set for its worst monthly and yearly decline in about a decade, amid nagging concerns that the Federal Reserve is normalizing interest rates too rapidly, and that a continuing tariff dispute between China and the U.S. could devolve and help lead to a domestic recession, as international economies are already demonstrating signs of a slowdown.
Also stoking anxiety was a tweet from Treasury Secretary Steven Mnuchin to assess the health of the banking system, which has raised some questions about liquidity among those institutions that had not previously been raised. Treasury officials insist that the calls to bank executives were just a routine checkup.
Stocks Hit 20-Month Low as D.C. Turmoil Weighs: Markets Wrap

U.S. stocks fell to the lowest since April 2017 as the turmoil in Washington rattled financial markets anew, pushing the S&P 500 to the brink of a bear market. Crude sank below $45 a barrel and the dollar tumbled.

The S&P 500 notched a fourth straight drop of at least 1.5 percent, a run of futility not seen since August 2015. It’s now down more than 19.8 percent from its September record and on pace for the worst monthly drop since 2008. Trading was 41 percent above the 30-day average in a session that’s normally subdued ahead of the Christmas holiday. The stock market closed at 1 p.m.

Investors looking to Washington for signs of stability that might bolster confidence instead got further rattled. President Donald Trump blasted the Federal Reserve, blaming the central bank for the three-month equity rout days after Bloomberg reported he inquired about firing the chairman.

The comments came after Steven Mnuchin called a crisis meeting with financial regulators, who reportedly told the Treasury secretary that nothing was out of ordinary in the markets. Traders also assessed the threat to the economy from a government shutdown that looks set to persist into the new year.
“Any kind of disciplined market-friendly messaging from the White House has gone out the window,” said Ernesto Ramos, head of equities at BMO Asset Management. “It’s all related to politics and the fact that the market’s figuring out there’s very little in the way of consistency and discipline.
The tumult in Washington over the weekend did little to placate U.S. equities that careened to the worst week in nearly a decade after the Federal Reserve signaled two more rate hikes in 2019. The S&P 500 on track for the steepest quarterly drop since the financial crisis. Combined with the ongoing trade war, higher borrowing costs and signs of a slowdown in global growth, the political turmoil has raised the specter of a recession.
“The reality is, in Washington you have this massive amount of unpredictability,” Chad Morganlander, portfolio manager at Washington Crossing Advisors, said on Bloomberg TV. That combines with concerns over global growth and removal of stimulus “gives investors this level of chill where they’re going to compress multiples regardless of what the backdrop in 2020 will be,” he said.
Read more how a vocal minority is echoing Trump’s concern about Fed tightening

Elsewhere, emerging market currencies and shares fell even as China’s top policy makers said they’ll roll out more monetary and fiscal support in 2019, ratcheting up the targeted stimulus of 2018. Oil dropped even as some OPEC members pledged to deepen output cuts. The euro advanced against the dollar.
These are the main moves in markets:


Shutdown Grinds On With Democrats Venting and Trump ‘All Alone’

As the partial U.S. government shutdown enters a third day, lawmakers have left Washington for the Christmas holiday with no sign of urgency to resolve the fight over President Donald Trump’s demand for border wall money.

Unlike shutdowns of the past, Congress and the White House aren’t racing to reopen the government. Offices of congressional leaders who are responsible for negotiating with the president are shuttered as Trump remains at the White House after canceling a trip to his Mar-a-Lago resort in Florida.

Previous government closures have put Washington in crisis mode with round-the-clock talks, strategy sessions and public posturing. Not so, this time. The next possibility for votes in the House and Senate is on Dec. 27, but Democrats have indicated the two sides are far from a deal. If there’s no agreement, many lawmakers won’t return until the new session of Congress starts on Jan. 3, when Democrats take control of the House.

Democrats said Monday they’re having trouble negotiating with the Trump administration. “Different people from the same White House are saying different things about what the president would accept or not accept to end his Trump Shutdown, making it impossible to know where they stand at any given moment,” House Democratic leader Nancy Pelosi and Senate Democratic leader Chuck Schumer said in joint statement.

The president has been attacking Democrats over the wall on Twitter, and continued on Monday. “I am all alone (poor me) in the White House waiting for the Democrats to come back and make a deal on desperately needed Border Security,” Trump wrote. In a later tweet, he said the administration just awarded a contract for a section of wall in Texas and that “Democrats must end Shutdown and finish funding.”