A heatwave for Christmas: Parts of Australia to hit 47 deg C (117 deg F) with warm records set to tumble 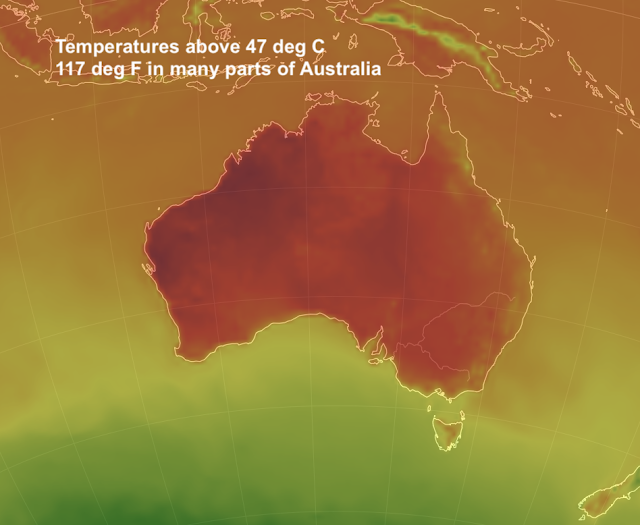 A heatwave will hit most of Australia this week that will push Christmas temperatures in some areas to as much as 12C above the December average before breaking monthly records later in the week. Victorian authorities have issued health alerts for parts of the state and fire warnings are in place for several other states including Western Australia, South Australia and Tasmania.

The Kimberley region of Western Australia is the one location that could break heat records on Christmas Day, with the town of Fitzroy Crossing expecting a maximum of 47C, breaking the previous annual record of 46.5C, which was set earlier this month.

Inland areas of South Australia will have temperatures in the low-to-mid 40s and Adelaide is forecast to reach 41C on Thursday.
Parts of Victoria are forecast to reach temperatures above 40C towards the end of the week, with Mildura in the state's north-west expecting a top of 46C on Sunday.
Other parts of the country could see record highs for December later this week.
"Generally, for Christmas Day across southern Australia we're looking at temperatures 6C to 12C above average for the daily maximum," said Sarah Fitton, an extreme weather meteorologist at the Bureau of Meteorology.
"It's a little bit cooler for Tasmania and southern Victoria for Christmas Day, but still above average for this time of year."

Coastal Queensland is the only region experiencing below-average temperatures for this time of year. Temperatures across southern and central Australia and New South Wales will increase from Boxing Day and into the new year period.
The Victorian health department has issued a health alert for the Mallee, north-central, north-east and northern country (which takes in towns such as Bendigo and Shepparton) and Wimmera districts effective from Thursday.

"The forecast conditions may cause an increase in heat-related illnesses in the community," the department said and warned people older than 65, children and babies, pregnant women and people with medical conditions were most at risk.
On Monday afternoon the SA Ambulance Service issued a similar warning for the Christmas period and said they had extra doctors, paramedics, nurses and call centre staff working because of the forecast conditions.

In Sydney, temperatures are forecast to reach 34C in city areas on Sunday, 38C in Parramatta and 41C in Penrith and Richmond. Areas around Adelaide and Melbourne will have milder temperatures around Boxing Day before the heat kicks in again. Photo: mrtwister/123RF
The worst of the weather has passed for parts of the North Island, with Metservice lifting its heavy weather warnings.
But the remnants of heavy rain overnight are still being felt in parts of the country.
While heavy rain has eased in Auckland, Waikato, Gisborne south of Tolaga Bay, and Hawkes Bay from Hastings northwards, heavy rain is expected south of Hastings, Wairarapa and in parts of Marlborough.
The rain is also expected to push as far south as Christchurch.
Metservice says low pressure off the coast of Taranaki is shunting the wet weather towards the South Island, and says Cantabrians could be set for a wet Christmas.
Further north people are being warned of potential thunderstorms from Northland to Tararua.
The weather isn't expected to ease until tonight. 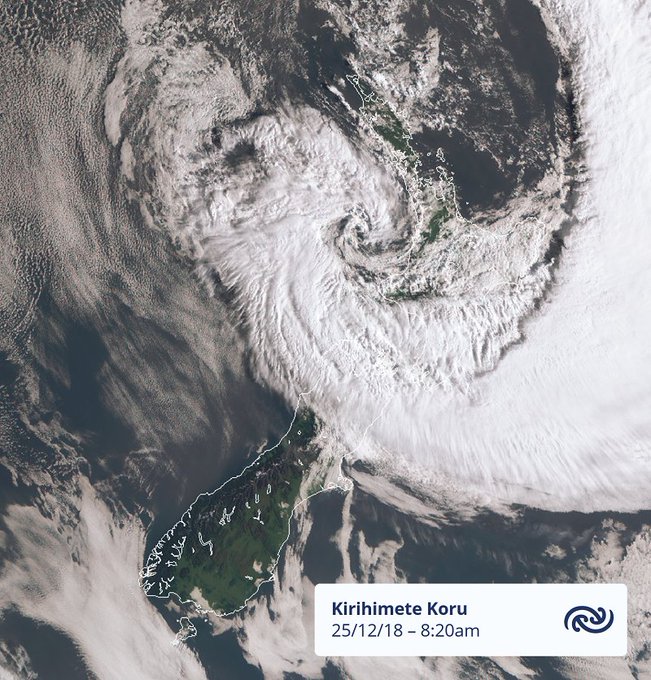 MetService✔@MetService
Kirihimete koru over Aotearoa. Could be more stunning down south. Up here over the North Island... The view ain't so sunny out the window!http://bit.ly/metservicenz
^Tui
6
8:54 AM - Dec 25, 2018

See MetService's other Tweets
Twitter Ads info and privacy
But MetService says people in the Otago region should prepare for hot weather, with Wanaka and Queenstown the pick of the country, expecting 30 degree temperatures.
Meanwhile, Bay of Plenty, Coromandel Peninusla, Gisborne, Northland and Rotorua have all experienced heavy rain, causing surface flooding on several roads.
Drivers making their way down State Highway 1 just before the Te Kauwhata exit are urged to take caution due to flooding. The New Zealand Transport Agency (NZTA) says due to a slip on State Highway 25 Coromandel to Te Rerenga heavy vehicles are not suitable and caution is advised.
State Highway 16 is closed north of Helensville due to flooding.
NZTA says the road is closed North of West Coast Road, and between Kaukapakapa and Kahikatea Flat Road.
Meanwhile there are reports of a serious crash blocking State Highway 1 in the central North Island.
The highway is blocked north of Foxton at the Paranui Road intersection, says the NZTA.
Delays are likely.
And State Highway 54 near Hunterville is partially blocked by a fallen tree.
A temporary 30 kilometres per hour speed limit is in place south of the intersection with State Highway 1.
The weather has cleared up a little in Coromandel and Northland in recent hours but MetService says there is a chance of more rain and isolated thunderstorms for the rest of the day. 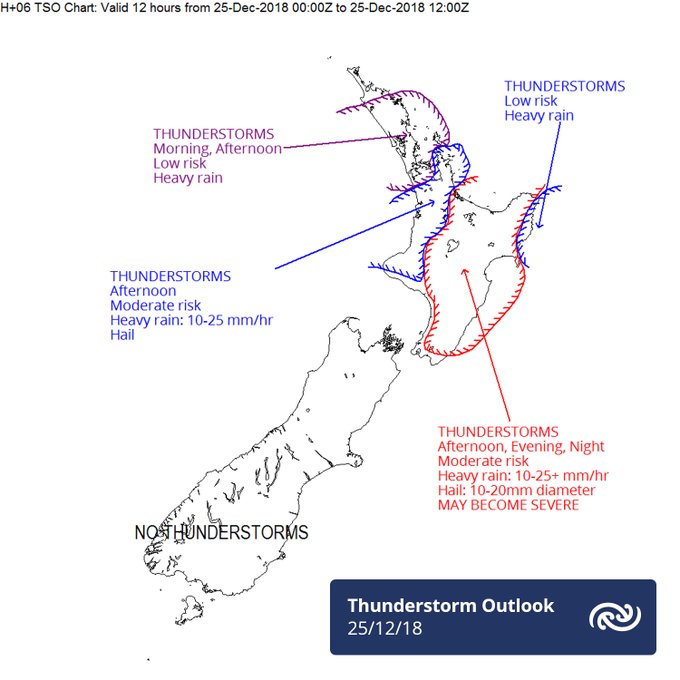 MetService✔@MetService
Today's thunderstorm outlook. Broad risk across much of the North Island. http://bit.ly/TSOutlook
^Tui
3
9:17 AM - Dec 25, 2018

See MetService's other Tweets
Twitter Ads info and privacy
King tides and strong onshore winds could cause flooding along parts of the East Coast in the North Island later today. 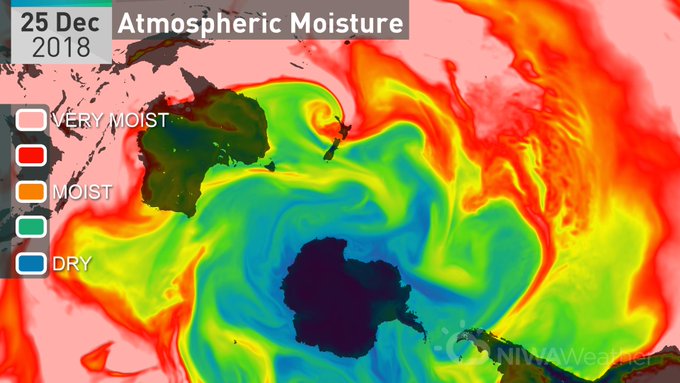 NIWA Weather@NiwaWeather
The atmospheric river affecting the North Island is a striking feature on a hemispheric scale.

See NIWA Weather's other Tweets
Twitter Ads info and privacy
Campers at several spots on the Coromandel Peninsula were moved to high ground yesterday as a precaution after flooding, with more than 100mm was recorded in less than 24 hours in parts. 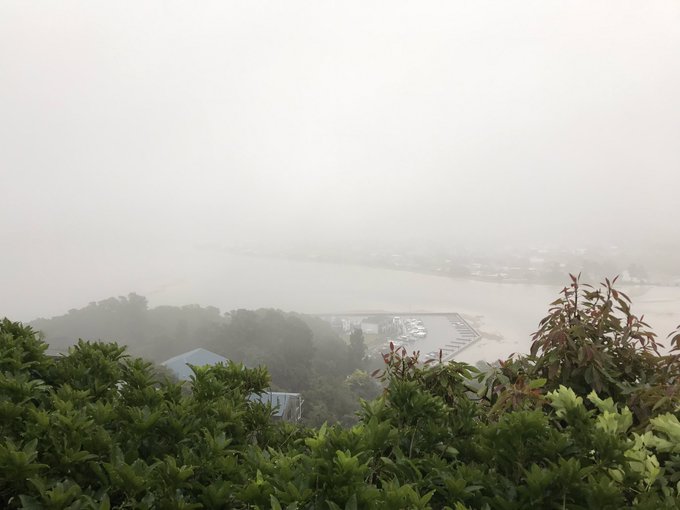 Andrew Tyrrell@_andrewtyrrell_
LOST: a small town named #Tairua on the east coast of the #Coromandel Peninsula. Last seen somewhere on the other side of that murk. If found, please wring out and return.
6
6:54 PM - Dec 24, 2018 · Tairua, Thames-Coromandel

See Andrew Tyrrell's other Tweets
Twitter Ads info and privacy
Meanwhile at Waihi Beach, the sun is shining this morning following two days of heavy rain that caused flooding.
The South Island is the place to be today and Otago, Southland and Westland are set for a fine day with temperatures of 30 degrees in parts.
Meteorologist James Millward said it was looking like Wanaka would be the hottest spot in the country with 31 degrees predicted.
"Christmas Day itself is looking really nice and fine if you're down through Southland, Otago, Dunedin, Westland - you're going to have a really nice day and temperatures kind of approaching 30 degrees through there."
The outlook for New Year's Eve at the moment predicted some strong westerly flows and possibly showers in the west but the eastern areas looked good, Mr Downs said

Meanwhile, in the Deep South