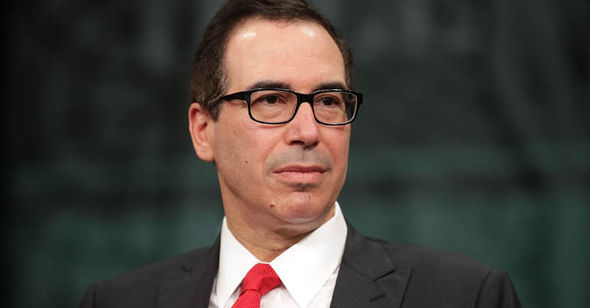 Amid some confusion whether Mnuchin acted independently on his own initiative, or at the instructions of president Trump, when he called up the CEOs of the top 6 US banks on Sunday and the President's Working Group on financial markets, i.e. PPT, Bloomberg reports that Mnuchin did not pre-clear the calls with Trump, citing an administration official. Mnuchin also convened the Plunge Protection Team without coordinating with Trump, and instead both actions were done in normal capacity of his job, the official said.

Which is surprising because at the same time, CNBC reported that the Treasury was not concerned about liquidity when Mnuchin called the big banks (which clearly should have been find considering they all passed the latest stress test without a hitch).

Why does this matter? Because suddenly everyone's ire is focused on Mnuchin's Sunday afternoon "liquidity is fine" tweet which instead of calming markets has only exacerbated the rout. And if Trump was indeed not behind Mnuchin's initiative to take a break from his Cabo vacation and not only call up the US banks - and then publicly disclose it ahead of Monday's open - but also announce it publicly, then Mnuchin may have just painted a big, red bullseye on his back when Trump is looking for the next scapegoat to "justify" the latest market drop.
Indeed, as Bloomberg wrote after the close, Trump’s frustration with Powell over the market’s performance "now may turn to his Treasury chief. One person familiar with the president’s thinking says that Trump has weighed dismissing Mnuchin, while another said that Mnuchin’s tenure may depend in part on how much markets continue to drop."
After Mnuchin’s call, which produced no public statement, stocks continued their Christmas Eve slide, ending the day with the benchmark S&P 500 down 2.7 percent, hitting its lowest level in 20 months. The president will continue looking for a scapegoat. Now that he’s acknowledged that he can’t fire Powell, Trump’s target could become Mnuchin.

In a sign Trump may have lost some faith in Mnuchin, the president has asked whether one or more of his advisers could meet with Powell, according to a person familiar with the matter. That would be seen as undermining the authority of the Treasury chief, who sees Powell for lunch once a week and is normally the official designated to deliver the administration’s views.

“There are plenty of people inside the White House who are not fans of Mnuchin who are happy to throw him under the bus,” said Stephen Myrow, managing partner at Beacon Policy Advisors.

And just like that, the countdown to the next departure from Trump's (formerly) closest circle begins.