Temperature anomaly﻿ in Australia: Sandals and pavement are melting as extreme heatwave scorches across Australia

Australia’s post-Christmas heatwave continues to sweep across the country, with a near record-breaking 49°C [120°F] forecast for Western Australia, and fire danger, health and air quality warnings issued across the nation.Temperature records have been broken as a heatwave continues across the country and parts of South Australia are expected to enter catastrophic fire conditions later on Friday.
Marble Bar in north-western Western Australia broke its all-time heat record on Thursday, reaching 49.3°C [120.7°F) as parts of SA and Victoria issued bushfire warning, and extreme weather forecast to continue into next week…

In northern Victoria, Mildura had another day of temperatures in the mid-40s, reaching 44°C on Thursday. In New South Wales, Menindee, near Broken Hill, and Wentworth, near the Victorian border, peaked at 45°C.

The highest warnings were in place for South Australia, which was expecting temperatures of 48°C at Oak Valley, north of the Nullabor, and 47°C at Port Augusta.

“The previous December record is also 47°C from three years ago so we might see some records tumble there today,” said Diana Eadie, a meteorologist at the bureau.

By Friday morning, temperatures in Snowtown had already reached 38°C. 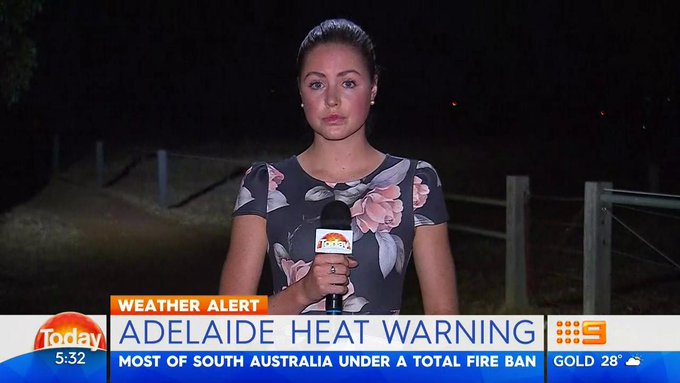 The Today Show✔@TheTodayShow
An extreme heatwave is currently blanketing South Australia with fire warnings at catastrophic. #9Today
1
7:51 AM - Dec 28, 2018

Temperatures in much of the country were sitting at 5°C to 15°C above average for this time of year, with only a few places escaping the heat.

Beachgoers hoping to cool off in the sea were also advised to take care, after four people drowned in coastal waters in two days on Christmas Eve and Christmas Day.
Another totally insane heat anomaly in Australia!