Jim Lee on the history of geoengineering

In the search for actual evidence on geoengineering I have discovered the work of Jim Lee.

He has set up a webpage called weather modification history which has gathered all the resources – newspaper articles, patents, videos all in one place in a rather impressive manne.

I have decided to use this holiday break to step back temporarily from my usual subjects and look at the evidence for this and the existence of UFO’s.

Here is the latest from Jim Lee

SPRING 2019
December 5, 2018 By Evan Barnard
Originally proposed by Bill Gates’ company Intellectual Ventures, the StratoShield has been renamed the StratoCruiser and a team funded by Bill Gates’ FICER, Harvard’s Solar Geoengineering Program Research Program, the Hewlett Foundation, the Alfred P. Sloan Foundation, and other philanthropists are planning on the world’s largest experiment in dimming the sun.


This experiment is designed to mimic volcanic eruptions by spraying sulfur into the stratosphere to cool the planet, a geoengineering solar radiation managment (SRM) technique known as stratospheric aerosol injection (SAI). David Keith and Frank Keutsch plan to test the equipment by spraing water, then move on to spraying calcium and eventually sulfur.
Stratospheric sulfur injections is the most often talked about way of mimicing the Mt. Pinatubo eruption which sent massive amounts of sulfur into the stratosphere and cooled the planet. When this happened, the Amazon basin almost dried up, and therein lies the largest problem with geoengineering schemes like this: they will change global rainfall patterns and create winners and losers…. losers being dead people.
The Integrated Assessment of Geoengineering Proposals (IAGP) and the Geoengineering Model Intercomparison Project (GeoMIP) computer models agree, the southern hemisphere will get dryer and the northern hemisphere will get wetter. This endangers the entire globe as it will lead to increased flooding and storm severity in the north and drought and famine in the south.
This is why 110 civic societies have proposed a permanent ban on geoengineering: The Hands Off Mother Earth manifesto. This manifesto is being presented at COP24 and also proposes putting a halt to Keith’s Stratospheric Controlled Perturbation Exeperiment (SCoPEx. StratoCruiser).
In addition the the drawbacks mentioned above, please also check our Professor Alan Robock’s 27 reasons not to geoengineer. The concerns far outweigh the benefits and coating our skies in sunscreen should be banned and all research halted.

Their funding will come from Harvard internal funds and likely Harvard's Solar Geoengineering Program, which has raised money from Microsoft co-founder Bill Gates, the Hewlett Foundation, the Alfred P. Sloan Foundation, and other philanthropists. SCoPEx follows in the wake of several other solar geoengineering collaborations that have failed to pick up momentum, such as at the 2011 E-PEACE experiment out of the University of California, San Diego, and the SPICE collaboration in the U.K., which stalled in 2012. - "Helping Hand or Hubris?" APS


Lee cites Alan Robock who is an American climatologist from Rutgers University.

“Alan Robock (born 1949) is an American climatologist. He is currently Distinguished Professor in the Department of Environmental Sciences at Rutgers University, New Jersey.[1] He advocates nuclear disarmament and has met with Fidel Castro during a lecture trip to Cuba discuss the dangers of nuclear weapons. Alan Robock was a 2007 IPCC author, a member of the organisation when it was awarded the Nobel Peace Prize, "for their efforts to build up and disseminate greater knowledge about man-made climate change, and to lay the foundations for the measures that are needed to counteract such change" 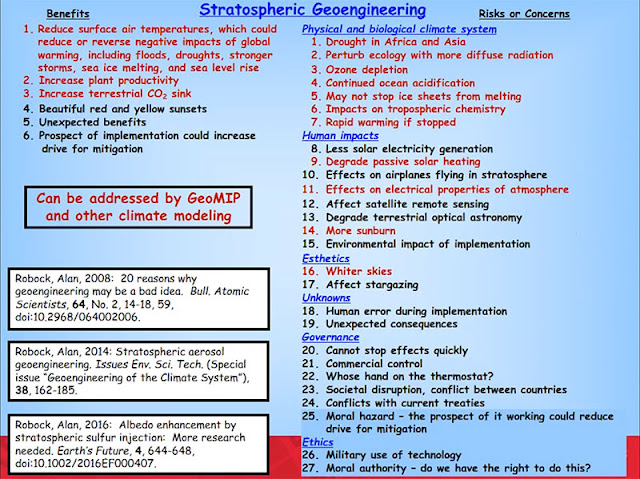 
Geoengineering, also called climate engineering, has been proposed to address global warming, involving “solar radiation management (SRM)” by injecting particles into the stratosphere, brightening clouds, or blocking sunlight with satellites between the Sun and Earth. (“Geoengineering” also refers to carbon dioxide reduction, a completely different proposed technology, with different costs and governance. It is not addressed here.) While volcanic eruptions have been suggested as innocuous examples of stratospheric aerosols cooling the planet, the volcano analog actually argues against stratospheric geoengineering because of ozone depletion and regional hydrologic responses. No such systems to conduct stratospheric geoengineering now exist, but a comparison of different proposed stratospheric injection schemes, using airplanes, balloons, and artillery, shows that using airplanes to put sulfur gases into the stratosphere would not be expensive. Nevertheless, it would be very difficult to create stratospheric sulfate particles with a desirable size distribution.Our Geoengineering Model Intercomparison Project (GeoMIP), conducting climate model experiments with standard stratospheric aerosol injection scenarios, is ongoing. We have found that if we could counteract increasing greenhouse gases with global insolation reduction we could keep the global average temperature constant, but global average precipitation would reduce, particularly in summer monsoon regions around the world. Temperature changes would also not be uniform. The tropics would cool, but high latitudes would warm, with continuing, but reduced sea ice and ice sheet melting. New experiments with time- and space-varying sulfate injections, or that combine stratospheric SRM with surface brightening, show that it may be possible to control to some extent these regional differences. Temperature extremes would still increase, but not as much as without SRM.

If SRM were halted all at once, there would be rapid temperature and precipitation increases at 5-10 times the rates from gradual global warming. Sudden geoengineering termination would more than double temperature velocities for the land and ocean, and would more than triple temperature velocities in multiple global biodiversity hotspots. These geoengineering-associated velocities exceed even the most optimistic dispersal rate estimates for many species, increasing local extinction risks. Rapid geoengineering implementation and termination would significantly increase the threats to global biodiversity and ecosystems from climate change.

SRM combined with CO2 fertilization would have small impacts on rice production in China, but would increase maize production. New experiments with the Community Earth System Model from the National Center for Atmospheric Research, which includes comprehensive tropospheric and stratospheric chemistry, show that SRM using stratospheric aerosols would reduce stratospheric ozone and enhance surface UV-B radiation. The enhanced downward diffuse radiation would increase the surface CO2sink. Surface ozone and tropospheric chemistry would likely be affected by SRM, but the overall effect is strongly dependent on the SRM scheme.

If there were a way to continuously inject SO2 into the lower stratosphere, it would produce global cooling, stopping melting of the ice caps, and increasing the uptake of CO2 by plants. But there are at least 27 reasons why stratospheric geoengineering may be a bad idea. These include disruption of the Asian and African summer monsoons, reducing precipitation to the food supply for billions of people; ozone depletion; no more blue skies; reduction of solar power; and rapid global warming if it stops. Furthermore, there are concerns about commercial or military control, and it may seriously degrade terrestrial astronomy and satellite remote sensing. Global efforts to reduce anthropogenic emissions (mitigation) and to adapt to climate change are a much better way to channel our resources to address anthropogenic global warming.

https://ams.confex.com/ams/98Annual/webprogram/Paper332066.html
'How to pay the dead people'
It is likely that any SRM geoengineering intervention will create

winners and losers and some nations may always be against any

Gregory Benford raised the issue of reaching agreement on the global

scale and how problematic it would be. If for example the arctic

cool the arctic by 1 C, how could they deal with complaints from

In any given year there are floods, droughts, heatwaves, etc. but

(rightly or wrongly, partially or fully) to the intervention. Two

How would aggrieved nations or peoples seek reparations for perceived


Panelists Call for Creation of World Commission to Handle Solar Radiation Management
Posted by seemorerocks at 14:51