Mnuchin tries to calm fears about the economy 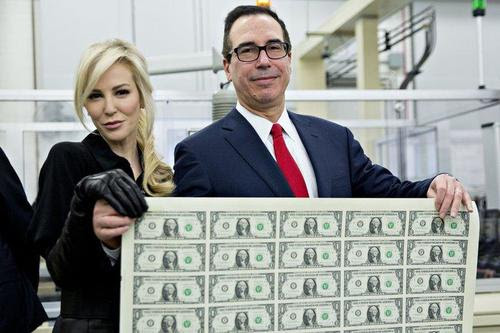 If the financial markets are going to be just fine, then why did Treasury Secretary Steven Mnuchin make emergency calls to the CEOs of the six biggest banks in America on Sunday?  And if we don’t have anything to worry about, then why has he scheduled an emergency call with the Presidents Working Group on Financial Markets on Christmas Eve?  Actions speak louder than words, and we haven’t seen these sorts of emergency moves since the last financial crisis.  Last week was the worst week for the stock market in 10 years, and it is understandable that they would want to try to do something to ease the panic in the marketplace, but for many this is just going to confirm that a new financial crisis has now arrived.  The following is from Secretary Mnuchin’s official statement…

Washington — Secretary Mnuchin conducted a series of calls today with the CEOs of the nations six largest banks: Brian Moynihan, Bank of America; Michael Corbat, Citi; David Solomon, Goldman Sachs; Jamie Dimon, JP Morgan Chase, James Gorman, Morgan Stanley; Tim Sloan, Wells Fargo. The CEOs confirmed that they have ample liquidity available for lending to consumer, business markets, and all other market operations. He also confirmed that they have not experienced any clearance or margin issues and that the markets continue to function properly.
Tomorrow, the Secretary will convene a call with the President’s Working Group on financial markets, which he chairs. This includes the Board of Governors of the Federal Reserve System, the Securities and Exchange Commission, and the Commodities Futures Trading Commission. He has also invited the office of the Comptroller of the Currency, and the Federal Deposit Insurance Corporation to participate as well. These key regulators will discuss coordination efforts to assure normal market operations. 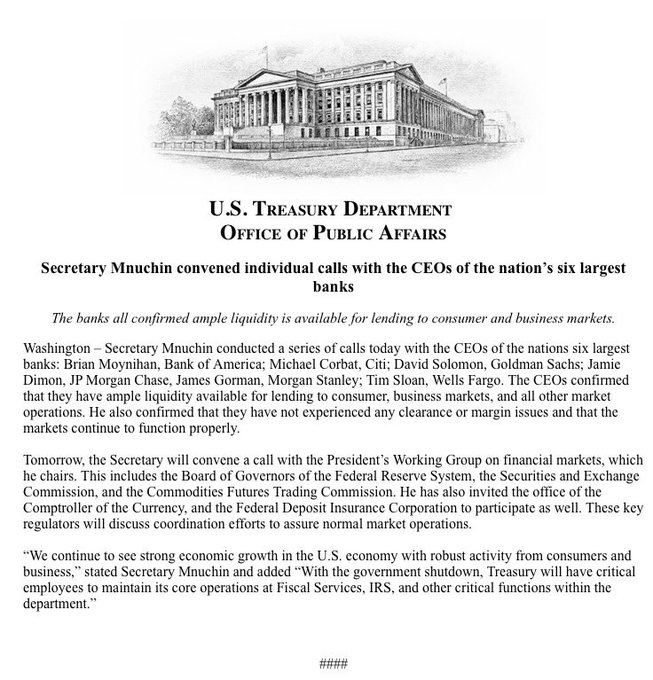 8,794 people are talking about this
Twitter Ads info and privacy
Apparently Mnuchin believes that the fact that he is taking action is going to “reassure” the markets.  One anonymous source told CNN that Secretary Mnuchin is “being pre-emptive”…

“It’s being pre-emptive,” a person familiar with the matter told CNN. “It’s sending the proper message to the market so they can calculate the real picture into their Monday opening. They don’t have to wait until something happens to be reassured.”

But others believe that these moves could almost be akin to yelling “fire” in a crowded theater.  If investors start having flashbacks to similar meetings during the crisis of 2008, that could cause them to panic even more, and that could create even bigger problems on Wall Street.
So far this month, investors have pulled more money out of U.S.-based stock funds than ever before in history.  People are really starting to freak out, and Stephen Suttmeier of Bank of America-Merrill Lynch is warning that this market decline could extend “through the first half of 2019”…

Bank of America-Merrill Lynch sees stocks struggling through the first half of 2019.
Stephen Suttmeier, the firm’s chief equity technical strategist, is building his case with two S&P 500 charts. They suggest stocks are in the throes of a bear market and the correction is deepening.
“We are breaking through a massive support on the S&P between that 2,600 and 2,500 range,” he said Thursday on CNBC’s “Futures Now. ” “We could see the mid-2,300s on the S&P 500.”

Personally, I believe that Suttmeier is being way too optimistic.
The U.S. economy is already being strangled by higher interest rates, and the Federal Reserve has indicated that they intend to conduct even more rate hikes in 2019.  President Trump can see what is happening, and he deeply regrets nominating Jerome Powell for the top spot at the Federal Reserve.  Over the weekend, Bloomberg was reporting that Trump had been talking about firing Powell…

President Donald Trump has discussed firing Federal Reserve Chairman Jerome Powell as his frustration with the central bank chief intensified following this week’s interest-rate hike and months of stock-market losses, according to four people familiar with the matter.
Advisers close to Trump aren’t convinced he would move against Powell and are hoping that the president’s latest bout of anger will dissipate over the holidays, the people said on condition of anonymity. Some of Trump’s advisers have warned him that firing Powell would be a disastrous move.

Unfortunately, that isn’t going to happen.
The White House later determined that Trump “does not have the authority” to fire Powell, and so we are all stuck with him…

Acting White House Chief of Staff Mick Mulvaney said Sunday that President Trump “now realizes” he can’t fire Federal Reserve Chairman Jerome Powell, an acknowledgment that came after reports that Trump has discussed dismissing the Fed chief in recent days amid the stock market’s meltdown.
“I think (Trump) put out a tweet last night specifically saying he now realizes he does not have the authority to fire” Powell, Mulvaney said on ABCs This Week. Mulvaney corrected himself after program host Jonathan Karl pointed out it was Treasury Secretary Steven Mnuchin who tweeted about Trump’s reversal.

Of course firing Powell would not ultimately fix much of anything.

The core of the problem is the Federal Reserve system itself.  It is a system that is literally designed to create booms and busts, to systematically debase our currency, and to create as much government debt as possible.  It has been doing a great job at achieving all three of those goals, and if we ever want to reverse course then we need to shut down the Federal Reserve for good.
The Federal Reserve created the boom and bust cycle that resulted in the financial crisis of 2008, and now another boom is turning into a bust right in front of our eyes.
The design of the Federal Reserve system is fundamentally flawed, but this issue isn’t really on anyone’s political radar right now, and that is extremely unfortunate.
Trump: "Fed Like a Powerful Golfer Who Can't Putt"

Trump lashed out at the Fed again today saying the only problem with the economy is the Fed.

The only problem our economy has is the Fed. They don’t have a feel for the Market, they don’t understand necessary Trade Wars or Strong Dollars or even Democrat Shutdowns over Borders. The Fed is like a powerful golfer who can’t score because he has no touch - he can’t putt!
4:55 AM - 25 Dec 2018

Meanwhile, let's check in on the PPT.​
Nothing Out of the Ordinary
Bloomberg reports U.S. Regulators Tell Mnuchin Nothing Is Out of Ordinary in Markets
Top U.S. financial regulators assured Treasury Secretary Steven Mnuchin during a hastily organized call Monday that they are seeing nothing out of the ordinary in markets, according to a person with knowledge of the discussion, despite a recent stock slump that many traders tied to the U.S. government shutdown and turmoil emanating from the Trump administration.
The call with the President’s Working Group on financial markets, a move that appeared designed to calm nerves, capped a chaotic five days that started with Defense Secretary Jim Mattis announcing his resignation and culminated with Bloomberg News reporting Friday evening that President Donald Trump was discussing firing Federal Reserve Chairman Jerome Powell. The Standard & Poor’s 500 Index slipped by as much 2 percent on Monday.
Damn PPT Refuses to Do Its Job

Clearly, the PPT does not know how to putt either. So sad.
Mike "Mish" Shedlock
Trump Plans to Convene Plunge Protection Team (PPT)

In lieu of firing Powell, President Trump has a new idea: Convene the PPT

President Trump now advocates intervening in the markets if he does not like the direction of the stock market. This is seriously crazy, but please consider Top Trump official calls bankers, will convene 'Plunge Protection Team'

U.S. President Donald Trump’s Treasury secretary called top U.S. bankers on Sunday amid an ongoing rout on Wall Street and made plans to convene a group of officials known as the “Plunge Protection Team.”

“Today I convened individual calls with the CEOs of the nation’s six largest banks,” Treasury Secretary Steven Mnuchin said on Twitter shortly before financial markets were due to open in Asia.

“The CEOs confirmed that they have ample liquidity available for lending,” the Treasury said.

The Treasury said Mnuchin will convene a call on Monday with the president’s Working Group on Financial Markets, which includes Washington’s main stewards of the U.S. financial system and is sometimes referred to as the “Plunge Protection Team.”

The group, which was also convened in 2009 during the latter stage of the financial crisis, includes officials from the Federal Reserve as well as the Securities and Exchange Commission.

Seriously Crazy
This administration is seriously crazy.
Might I point out there are already breakers if the market falls too far, too fast. Also note that Yapping No Longer Works.
Here's the Bear Market Reality: Expect Much Worse.
The PPT isn't going to stop the decline unless it buys the entire market.
Dear Secretary Mnuchin, I have a question, if the stock market is undervalued and investors will rotate from bonds to stocks as you stated, why do we need a PPT?
Of course, Treasury Secretary Mnuchin is Totally Clueless About How Markets Function. It is mathematically impossible for investors to rotate into stocks.
Wow. Such stupidity.
Mike "Mish" Shedlock