US plans to invade Venezuela 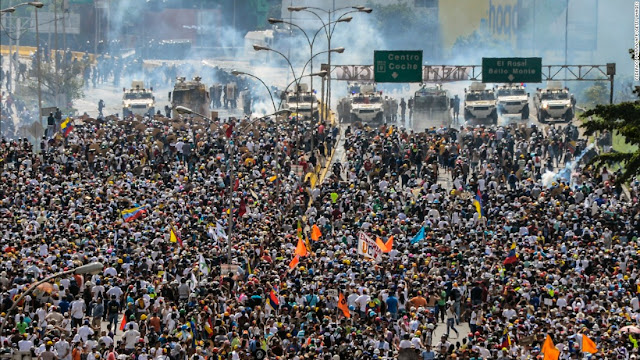 
In August 2017, Donald Trump said he did not exclude the military option to solve the Venezuelan crisis, which provoked a strong rejection both inside and outside the United States. However, the idea remains present even though many express themselves against it, writes the Business Insider newspaper.

The military option for resolving the crisis in Venezuela is on the table or at least in the head of the US president. So the AP news agency reported earlier this summer that President Donald Trump had discussed the military invasion of Venezuela during a White House meeting last year. To bolster his arguments, Trump recalled the military interventions of Grenada and Panama, which he said were a success.
Other voices in the United States have also been in favor of using military force. In particular, as the Business Insider underscores, in late August this year, Florida Republican Senator Marco Rubio, an advisor on Latin American affairs and close to Trump, said Venezuela has become a destabilizing force in the region.
“I believe that the armed forces of the United States are only used in the case of a threat to national security,” Rubio said, adding that he believed there was a “very strong” argument that “Venezuela and the Maduro regime have become a threat to the region and to the United States.”
There are also other opinions. Even if the Venezuelan crisis justifies pushing for political change, military intervention is not the way to do it, said Shannon O’Neil, senior researcher for Latin American affairs at the Council on Foreign Relations.
“But US military intervention is not the way to do it,” O’Neil argued this month. “Venezuela isn’t Grenada or Panama, the two Latin American countries invaded by the US during the closing days of the Cold War.”
According to O’Neil, a military invasion of Venezuela would be similar on a scale to that of Iraq, a country twice smaller than Venezuela, with a slightly larger population. Not taking into account that, according to the polls, American troops would not be welcomed with open arms in the Latin American country.
“Any invasion requires preparations on a similar scale, meaning a 100,000-plus force,” the analyst was quoted as saying.
For James Stavridis, a retired naval admiral, rather than resorting to military force unilaterally in Venezuela, Washington should boost interagency interaction and encourage more involvement of other countries in resolving the situation.
“The US should definitely not act alone,” adds James Bosworth, founder of Hxagon.
Although resistance to the use of force in Venezuela remains strong, US Secretary of State Mike Pompeo promised on Friday that Washington will increase pressure on Caracas.
“You’ll see in the coming days a series of actions that continue to increase the pressure level against the Venezuelan leadership folks, who are working directly against the best interest of the Venezuelan people,” Pompeo said. “We’re determined to ensure that the Venezuelan people get their say.”