The sudden collapse of an ice cap in the Russian Arctic 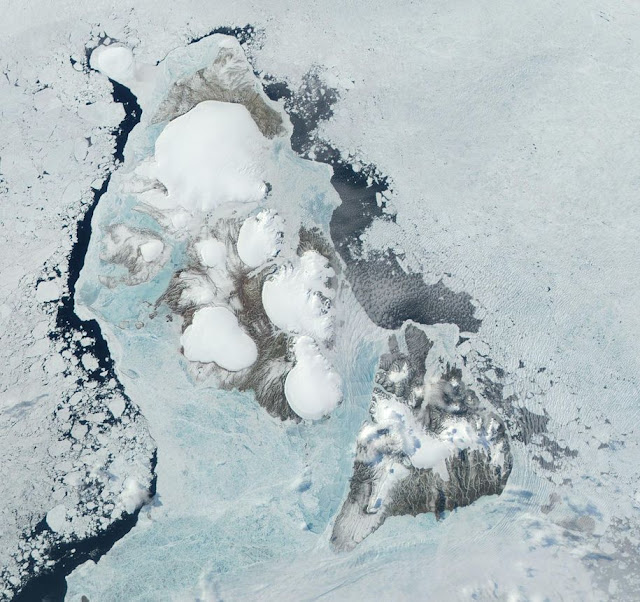 Climate scientists are using words such as “unprecedented,” “remarkable,” “extreme,” and “unexpected” to describe an event unfolding on a cold glacier, or ice cap, in the Russian high Arctic. An ice cap means that it is fastened hard to the bedrock and that, so far, has not responded to the warming climate. Researchers found that Russia’s Vavilov Ice Cap dramatically surged over the past couple of years resulting in massive amounts of ice loss and raising concerns that other ice caps may experience the same phenomenon to the detriment of us all — the rapid thawing of the planet’s air conditioner. The worlds ice caps together hold 1 foot of sea level rise.


The great ice platforms that are the submerged portion of the massive ice streams in the oceans off of Greenland and in particular, Antarctica, provides the resistance to the land ice from flowing into the sea. This buttressing phenomenon has barely changed for 100,000 years for some of the world’s great ice shelves, but in a change that will rapidly raise sea level, warm ocean water is melting and thinning the shelves from below causing them to slowly crack and collapse (slowly on a human time scale, but instantaneous by geological standards), by removing any resistance that they may have provided in holding back the inland ice stream pouring into the ocean.

Ice caps, on the other hand, are much smaller. They are not below sea level, instead, they rest at high altitude above sea level where there is no warm ocean water to melt the ice from below. This has remained true even during changes to the climate that is currently melting the glacial ice in most areas of the world.
A new study concludes that the bedrock of the Vavilov Ice Cap now has water at its base and there is no possibility of putting the toothpaste back into the tube.
From the Cooperative Institute for Research in Environmental Sciences:

In the last few years, the Vavilov Ice Cap in the Russian High Arctic has dramatically accelerated, sliding as much as 82 feet a day in 2015, according to a new multi-national, multi-institute study led by CIRES Fellow Mike Willis, an assistant professor of Geology at CU Boulder. That dwarfs the ice's previous average speed of about 2 inches per day and has challenged scientists' assumptions about the stability of the cold ice caps dotting Earth's high latitudes.

By satellite, they watched ice on the cap creep slowly forward for several years, before it accelerate slowly in 2010, surging rapidly forward in 2015. The initial very slow advance is thought to have been caused by a  shift in the direction of precipitation that occurred about 500 years ago. Before this time snow and rain came from the southeast, after this time rain and snow came from the southwest. As the western part of the ice cap advanced into the ocean the ice surged forward.

“Cold” ice caps, like Vavilov, occur in polar “deserts” with very little precipitation, and they’re normally frozen to their beds, flowing only due to bending of the ice under the force of gravity. With beds above sea level, they are normally insulated from the kinds of changes that have hit glaciers in less frigid regions: melting from below by warm sea water, for example, or sliding faster when warm surface meltwater drains to the bed of the ice.

Researchers suspect the ice cap began to dramatically advance when the bottom of the ice cap became wetter and the front of the glacier advanced onto very slippery marine sediments. The ice began to speed up, and friction caused some of the ice underneath the glacier to melt, which supplied more water to the bottom of the ice, reducing friction, which caused the ice to speed up, which in turn, again produced more water. Some of this water might have combined with clay underneath the glacier, reducing the friction beneath the glacier even further and allowing the truly extraordinary sliding speeds to occur.

The researchers note that the sediments below the ice cap had “become so slippery that the material couldn’t stop the ice from flowing”. Over a time period of just two years (2015-2017), the ice cap base reached a “tipping point, transforming into a near frictionless zone, which is well-lubricated and highly mobile".
It is unclear at this point whether climate change is involved in this particular incident or a weather system that occurred hundreds of years ago, that might just now percolated through the ice. This needs additional research to determine the exact source of the water that is lubricating the bedrock. But, regardless, the majority of the Arctic is rapidly unraveling from our relentless burning of fossil fuels. Buckle up ladies and gentlemen, we are in for a bumpy ride.

The below timelapse is of the Vavilov Ice Cap in the Russian High Arctic between 1985 and 2017. It is stunning. Whyjay Zheng of Cornell University compiled the video using Landsat imagery by NASA/USGS