The inside coup against Trump


Trump's Staff Overrides His Policies - They Are A Dangerous 'Resistance' 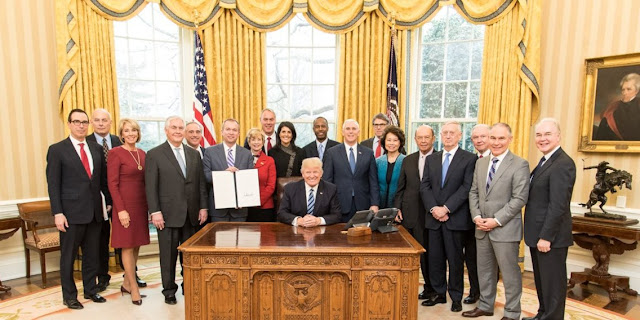 
Three recent publications claim that U.S. President Trump is not allowed to make policies, that his staff is sabotaging him as much as it can.
An anti-Trump author at the Washington Post, Greg Miller, just released a new book about Trump. The Post prints an excerpt:
‘The Apprentice’ book excerpt: At CIA’s ‘Russia House,’ growing alarm about 2016 election interference

Trump’s admiration for the leader of Russia was inexplicable and never wavered after taking office. He praised the Russian leader, congratulated him, defended him, pursued meetings with him, and fought virtually any policy or punitive measure that might displease him.

A trained intelligence operative, Putin understood the power of playing to someone’s insecurities and ego. On cue, he reciprocated with frequent praise for the president he had sought to install in the White House.

In phone conversations with Trump, Putin would whisper conspiratorially, telling the U.S. president that it wasn’t their fault that they could not consummate the relationship that each had sought. Instead, Putin sought to reinforce Trump’s belief that he was being undermined by a secret government cabal, a bureaucratic “deep state.”

“It’s not us. We get it,” Putin would tell Trump, according to White House aides. “It’s the subordinates fighting against our friendship.”

The Putin quote is probably genuine. But is it "playing to someone's insecurity and ego"? Or is it simply the truth?
A few lines later the author confirms that Putin is right. When Britain's Prime Minister Theresa May asked Trump to support her ridiculous 'Novichok' claims, Trump's underlings set out to further sabotage the relations with Russia:

During a weekend retreat at his Mar-a-Lago estate, Trump’s advisers persuaded him to support a plan to expel 60 suspected Russian intelligence operatives from the United States, telling him that Washington’s move would be matched in magnitude by allies in Europe.

Trump acquiesced, but his commitment unraveled on the trip back to Washington.

“Maybe we shouldn’t do this,” he said to deputy national security adviser Ricky L. Waddell during the short helicopter flight from Andrews Air Force Base to the White House on March 25.

The expulsions were set to be announced the next day in coordination with allies in Europe — an international show of resolve — and Trump was balking. Late that evening, Waddell scrambled to pull together a Situation Room meeting to confer with other top advisers on how to salvage the plan. White House Chief of Staff John F. Kelly, who called in on a secure phone line, said that he would phone Trump at his residence. “I’ll convince him,” Kelly said.

Kelly succeeded. But when the expulsions were announced, Trump erupted. He had expected France, Germany and other countries each to match the U.S. total, rather than for the cumulative response from Europe to be roughly equal to that of the United States. Trump worried that Putin would see him as the aggressor and accused aides of misleading him.

Trump's aids did exactly what Putin lamented about. They sabotaged the personal relations between Trump and Putin by convincing him to expel a too high number of Russian embassy officials.
North Korea complained when Secretary of State Pompeo pressed for immediate nuclear disarmament. The Singapore Statement, signed by Kim Jong Un and Trump, foresees this as only the third step of a larger process. Kim Jong Un, similar to Putin, expressed his dismay over Pompeo's demands, while expressing confidence in Trump himself.
Also recently published was a book by Bob Woodward, which follows a similar theme as Miller's 'Apprentice':
Jim Mattis Compared Trump to ‘Fifth or Sixth Grader,’ Bob Woodward Says in Book

Mr. Woodward’s reporting adds another layer to a recurring theme in the Trump White House: frustrated aides who sometimes resort to extraordinary measures to thwart the president’s decisions — a phenomenon the author describes as “an administrative coup d’état.”

(Woodward's book was well received by the anti-Trump 'resistance'. But few mentioned that Woodward searched for, but did not find any evidence for the alleged Trump-Russia collusion.)
The above book excerpts are confirmed by a quite ridiculous anonymous op-ed in the New York Times in which a senior officials in Trump's administration confirms that s/he and others sabotage Trump's policies:

[W]e believe our first duty is to this country, and the president continues to act in a manner that is detrimental to the health of our republic.

That is why many Trump appointees have vowed to do what we can to preserve our democratic institutions while thwarting Mr. Trump’s more misguided impulses until he is out of office.

The op-ed names two specific issues on which the staff sabotages Trump's initiatives:

[We] are trying to do what’s right even when Donald Trump won’t.

The result is a two-track presidency.

Take foreign policy: In public and in private, President Trump shows a preference for autocrats and dictators, such as President Vladimir Putin of Russia and North Korea’s leader, Kim Jong-un, and displays little genuine appreciation for the ties that bind us to allied, like-minded nations.

Astute observers have noted, though, that the rest of the administration is operating on another track, one where countries like Russia are called out for meddling and punished accordingly, and where allies around the world are engaged as peers rather than ridiculed as rivals.

On Russia, for instance, the president was reluctant to expel so many of Mr. Putin’s spies as punishment for the poisoning of a former Russian spy in Britain. He complained for weeks about senior staff members letting him get boxed into further confrontation with Russia, and he expressed frustration that the United States continued to impose sanctions on the country for its malign behavior. But his national security team knew better — such actions had to be taken, to hold Moscow accountable.

The deep state, the bureaucrats and policy minions who staff the White House and the government agencies, are actively subverting the elected president. They publicly brag about it.
Trump campaigned for better relations with Russia. But as soon as he was sworn into office, an "administrative coup d’état" happened and the policies reverted to the opposite. He said that he wanted the U.S. out of Syria and out of Afghanistan, but the "steady state" prevented that. Trump signed an agreement with North Korea that promises peace before disarmament. Then his staff went out and tried to turn it into the opposite.
Trump is the elected president. It is his privilege and duty to determine the policies of his administration. Why is no public figure expressing concern about this subversion of democracy? How come no one protests?
There are suggestions that Trump is only faking the discontent about his staff. That the effectively pursued policies are the ones he really wants. The three accounts above do not support that idea.
This situation undermines Trump standing in international negotiations as nothing he signs can be taken for granted, unless his staff agrees to it. This sorry state of the state will also have repercussions in future elections. Why would anyone vote for Trump, or someone else, if an elected president is unable to enforce policies?
Trump and his party pursue extreme right wing policies that I do not support at all. He might well have some dangerous impulses that could cause unforeseen damage.
But is it really better to let these unaccountable policy operators override his choices? Should we trust certified hawks like Bolton, Pompeo or Mattis any more that him? Is war with Russia or North Korea preferable to peaceful relations?

Posted by seemorerocks at 15:14