The Russian IL-22 was NOT shot down by by the Syrian Arab army.
Evidence indicates that it was FRANCE, not the Israelis. 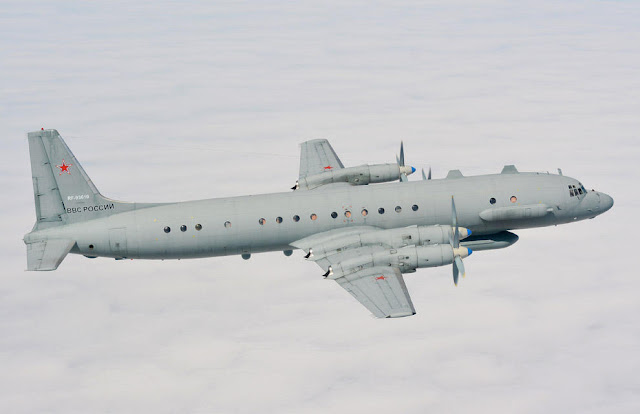 More and more frequently these days people are avoiding social media censorship and DDoS attacks on websites by putting their most incisive and sensitive material on Patreon or elswhere.
So it is today when two parallel articles are contradicting not only the western MSM narrative but also the narrative that the Russians are coming up with.
The picture coming out of Russian and pro-Russian media (such as the Duran) is to confirm the western media narrative that this was indeed a 'friendly-fire' incident whereby the IL-22 provided 'cover' for the Israeli jets.  All mention of the French seems to have been dropped.

I was sceptical about the claim of the SAA 'accidentally' bringing down the IL-22 and remain so today and whilst being broadly in agreement with Alexander Mercouris I find their explanation somewhat lacking and not totally convincing.
Two items have come out to contradict this version of events.
Firstly, Hal Turner has come out with more 'covert intelligence' ( "a uniquely-placed and extremely sensitive source close to me from my days as a National Security Intelligence Asset for the FBI Joint Terrorism Task Force") to say that it was the Israelis that shot down the Russian jet.

Several radar recordings from naval vessels in the Med and from radar at Latakia, confirm the Russian IL-20 was "directly fired upon by an Israeli F-16.  This was no accident, it was intentional."

The Kremlin is already talking about what steps to take and those discussion "Include the destruction of the Israeli air base from which that jet took off."  The thinking inside the Kremlin is that:  "Israel is NOT a member of NATO, so there's no danger of an immediate widespread conflict if Russia attacks the Israeli air base, and; the US is not likely to go to war with Russia over only a limited retaliatory attack against Israel."

MORE: The Israelis have been a significant nuisance to both Syria and Russia throughout the ongoing troubles in Syria and, according to this covert source "a strong majority of senior Russian military officers and civilian officials inside the Kremlin think it is long overdue that Israel be given a bloody nose, so they understand they aren't as tough as they think they are."

He further contends there are discussions going on in at the highest highest levels inside the US government, that could best be  described as "tense," "heated," and "bordering on fisticuffs."
Quite seperately Joaquim Flores of Russ Fort has produced an article that he has posted on Patreon because of sustained DDoS attacks on the main website which in part bears out the above while drawing a different conclusion
I will try to bring the essence of his argument rather than the entire article which, I hope, will become available.
Actually it already is, but will require a small, ongoing donation by joining Patreon which I recommend.
The first point is that, "Russia appears to be involved in an appropriate and strategically prudent disinformation campaign to avoid any further irreparable damage in Franco-Russian relations."
People seem to imagine that either the Russian media always lies or that they are incapable of doing so to protect their national interests.
I have noticed at various times that the Russians DO put out a narrative that will assist their own national interest and will stay silent on stories that would compromise the diplomatic process.
So it appears to be here.
"What the Russians claim is that Israeli craft using the Il-20 for cover 'confused' the SAA system and that the SAA system hit the Russian Il-20. We will explain that while this is possible, it is unlikely, and in fact the least likely of any realistic scenarios given the tremendous preparation and planning that goes into these events."

Flores' contention seems to be that, in line with earlier reports which stated that shots had been fired by the French, it was,in fact the French that shot down the jet.

Hal Turner - the Israelis shot down the Russian IL-20


Both Hal Turner and Joaquin Flores deal with the contention that the SAA 'accidentally' shooting down the Russian jet.
Hal Turner commented on this yesterday:


"Claims in media are saying the Russia IL-20 which was shot down, was hit by "Syrian Air Defenses by accident." Here's the problem:
"All Russian-built missiles are programmed to identify Russian aircraft as "Friendly" and NOT hit them.
"Even the old Syrian S-200 is programmed with this feature. It is a condition of weapons sales.
"So the CLAIM being made in media that it was an "accident" seems questionable on its face"

This has been reinforced by Flores:

The IFF system, and the situation in Syria, is not at all like the situation in the Georgian war ten years ago, when at the time there were some official Russian reports of there being difficulties separating Georgian from Russian aircraft. This is because MiGs are identical to MiGs. IFF systems at the time are not the same as today, with integrated transponders which make auto-locking impossible from the start. The Syrian Army at Lattakia does not, in reality, operate as a separate army. There, they have what is known as an integrated command, at least insofar as these issues are concerned. So the SAA couldn't have attacked or locked onto a Russian plane, because the transponder data in real time that is part of newer IFF systems actually would mean there would have to be an intentional manual override over the computerated 'no-lock possible' response the S-200's computer system would have automatically generated for a Russian plane of any kind.
The S-200 has an extremely high accuracy, not more than a bit different from the S-400 for a single target, and specifically a target of this size and speed, it would have had to 'miss' the Israeli plane in question, which only has a 10-15% chance of doing, but then proceed to then actually hit the Russian plane. But not only hit the Russian plane, but critically so. This is all we can ascertain once we realize that auto-locking without manual override onto the Russian plane with the IFF transponder in direct connection with the SAA (Russian joint command) at Lattakia, is practically impossible unless we say there was an American asset working at the controls of the SAA's Lattakia computer.
Blaming France


The agreement of Putin and Erdogan yesterday was brilliant because, if it comes it will avoid a messy and bloody military campaign to liberate Idlib and seems to square off Turkey's and Russia's national interests.

There is little doubt that the shooting down of the IL-22 was a reaction against this and was designed to trick Russia into compromising its delicate relationships with both France and Israel.

Russia did not play ball because it refused to blame France and only tangentially blamed Israel.  The western powers-that-be would hardly have expected Russia's reaction to have included accepting the "friendly fire "narrative. 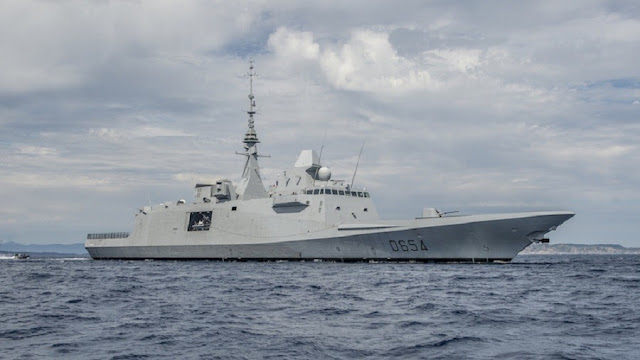 Russian media managed this by reporting the facts without using deductive logic or joining the dots.

This is how Flores illustrates this:

One indication of French guilt is that, despite no accusation being made, they came out with an immediate denial.  We never know if something is true until the first denial comes out. 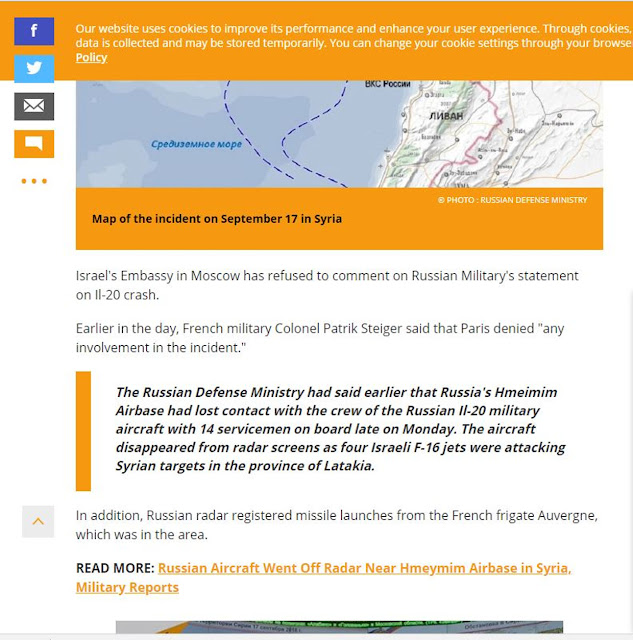 “....Readers will take note of the inclusion of the French denial. This French denial is bizarre and entirely out of place, since no one accused France. Do innocent parties randomly and yet officially deny involvement in things of which they are not formally accused? In most cases, no they do not. The immediate (early) denial by the French that their frigate hit the the Russian plane, points to an assumed capability by both French & Russians. Indeed, the French frigate in question, has that capability. “

"The French 'early denial' when no accusation was made, means that the West had planned for France to be blamed, the French authorities were prepared to carry out their script and deny the accusations that the Russians were 'obviously' going to make."

"Then something happened, and Russia didn't make that accusation. But there were the French authorities, going forward with the script, and in an incoherent way which really exposes what they were up to, and tells us all quite clearly what was planned, and yet all the while Russia doesn't at all blame France. Ridiculous, brilliant, absurd".

"The aim of the Atlanticists is to have France do it, have France be blamed, and to cause a massive public relations problem, that Putin would have to respond to, by naming, blaming, the French, and seeking to hold them accountable. How will the French and Russian publics, respectively, take this? Not well, and it doesn't work well for the Eurasia project either. Macron will eventually be out, and it's politically near-impossible to hold the leader of a country, although temporary, responsible without blaming a whole people for something. Once you throw in the work of French media spin-doctors, they will absolutely succeed in twisting it not as a Macron problem but a problem that Russia has with blaming France and all the French by extension."

At some stage the crash remains of the IL-20 are going to conclusively show that it was hit with an Aster missile, consistent with being fired from a French cruiser rather than with a small missile from an Israeli plane.

In the meantime the Russians are going to have to step very carefully and this latest mild bit of deception is part of that.

The last thing the Russians want is open conflagration.

They are using all their power - military and diplomatically, as as well as the media war - to avoid this.

We will have to wait and see how things transpire further.