Some cretins over on Facebook can’t fathom that because I post something it means that I ‘agree’ with it. 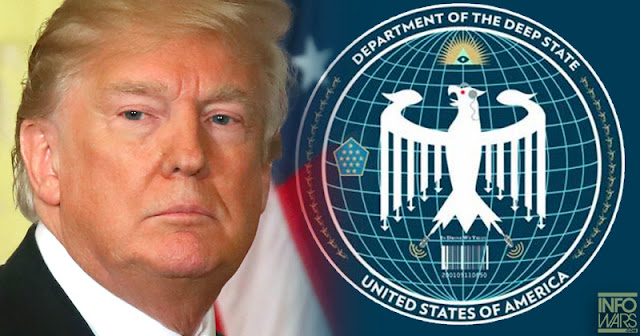 To watch the video GO HERE
Hillary Clinton, Barack Obama, John Brennan, Andrew McCabe, Loretta Lynch, Peter Strzok and a long list of other traitors have been conspiring for years to destroy America from within and see it replaced with a communist regime run by authoritarian globalists. Tech giants like Apple, Google and Facebook are all part of the plan, which is exactly why you’ve seen every one of them working closely with China to roll out authoritarian techno-tyranny infrastructure systems that plan to enslave every citizen of the world, making them powerless and obedient to a globalist technocracy that runs the “one world government.”
Trump’s plan to rescue America from the globalists will require temporary martial law
In order to halt this global dictatorship and defend America against traitors who are working to destroy it, President Trump must carry out the following actions:
1) Achieve the release of the declassified, unredacted deep state documents from within the FBI and DOJ that will reveal the full extent of deep state treason against America. (The FBI and DOJ are currently stalling this effort, furthering their treason against America and proving they have a lot to hide.) Pelosi, Schumer, Schiff and Warner have already committed acts of treason in calling on the FBI and DOJ to defy this presidential order.
2) Invoke the national emergency powers which are constitutionally granted to the executive branch of government. (Technically, this already happened in 2017.)
3) Invoke President Obama’s executive order 13618 and seize control of Google, Facebook, CNN, Washington Post and the New York Times to halt the treasonous lies, coordinated election fraud and political coup attempt which is being run by all these traitors of America.
4) Use all controlled communications channels to publicly declare the details of the crimes (and criminal actors) which have been committed against America. Disclose everything to the America people about how their country had been overrun and destroyed from within.
5) Order military police to find and arrest thousands of deep state traitors who have been deliberately undermining America from within. This will include hundreds of people inside the FBI and DOJ, plus hundreds more in the State Department and other agencies. Arrests must also include traitorous, corrupt federal judges who have deliberately undermined America by, for example, blocking Trump’s constitutional travel ban to protect America from enemy terrorists. Many traitors will attempt to flee the country, of course, and they will need to be located and brought to justice like former Nazi war criminals.
6) Issue an executive order demanding national voter ID for all future elections. No longer will America tolerate democracy being stolen by the votes of illegals who are granted voting rights by California and other complicit, anti-America states or cities.
7) Suspend elections during the military tribunals, but lay out a timeline for the restoration of elections and nationwide voting (with voter ID in place) to restore the rule of law and give America back to the American people.
8) Deploy the U.S. military along the southern border. Use the U.S. Army Corps of Engineers to build the wall.
9) Promise to resign the presidency once the rule of law is restored in America, signaling to the American people that Trump plans to hand over power to the next elected President within a reasonable time period. Americans will rightly be concerned about martial law morphing into a military dictatorship. Trump needs to assure the American people that his job is to destroy the deep state, restore the rule of law, then get out of the way and retire as the greatest U.S. President in history — the President who saved America from traitors and communists.
The American people will not tolerate a permanent military dictatorship in America, but they will tolerate temporary martial law needed to drain the swamp, arrest the traitors and restore the rule of law.
During this time, by the way, the entire FBI likely needs to be disbanded and rebuilt from scratch. The agency’s credibility has been utterly destroyed by the actions of James Comey, Peter Strzok and others.
Watch the full video explaining all this in detail: