Dispatch from Dahr Jamail - "we are entering the end game"

Brace for Impact, as the Climate “End Game” Has Arrived
Dahr Jamail 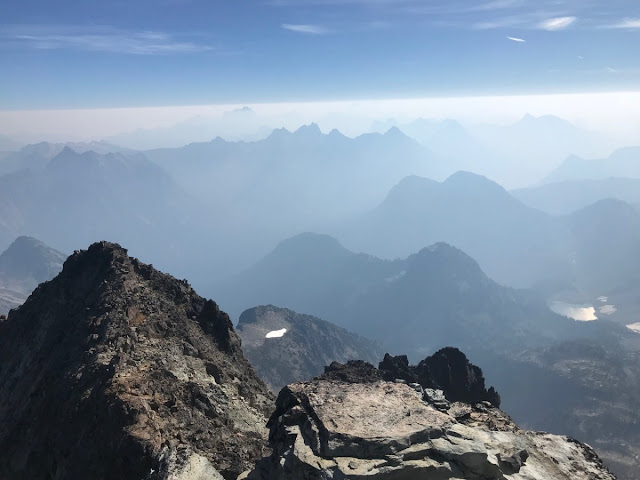 Over the years, writing these climate disruption dispatches has often weighed heavily on my soul. I’ve struggled to find a delicate balance between tracking this information, which these days means reporting on the demise of the biosphere, and living a meaningful life.


Recently, I again failed to achieve that balance, and needed to take a short respite from work to find my inner footing. I headed into my sanctuary, the mountains, for solace. I backpacked up into the northeastern Cascade Mountains of Washington State, where I live, and pitched a camp on the banks of a clear, turquoise alpine lake at 6,900 feet. I was surrounded by snowfields, high peaks, and mountain larch that will soon be turning from green to yellow as autumn rapidly approaches.


Despite smoke in the air from wildfires in Canada, eastern Washington, and beyond, conditions were beautiful. The next day I scrambled to the top of nearby Black Peak, but did so as the smoke became increasingly thick. My lungs felt scratchy, my eyes burned, and I could tell it was affecting my thinking. Atop the peak at 8,975 feet found me at roughly the elevation of the smoke line. Above were crystal clear blue skies; below, everything was shrouded in a brownish-grey sooty haze.

After taking lunch on the summit and reveling in the majestic yet smoky views, I headed back down to camp, where the smoke was rolling in by way of thick clouds. I decided to break camp a day early and hike down to the trailhead to head to my home near the west coast, hoping the smoke might not be as thick closer to the Pacific.


Two hours of driving later, the haze wasn’t as thick, but remained present. Not until I boarded the ferry and crossed the Strait of Juan de Fuca across Puget Sound did I finally emerge from the suffocating wildfire smoke.

The feeling of entrapment within the smoke, the coughing and wheezing while trying to breathe, the primal urge to escape it, all underscored to me how dire our situation is globally. Arriving back home, out of the smoke, I thought of future summers. Even up here in the verdant Pacific Northwest, wildfire smoke will be the norm. Yet, compared to those who’ve already lost their homes to the fires, or those who’ve had everything they own submerged by storm surges from hurricanes, or refugees fleeing war-torn countries destabilized by drought and climate disruption impacts, smoke inhalation is a minor problem. Such is the climate-triage of our new world.

In one of the more important recent scientific studies, published in the journal Science, researchers warn that ACD could cause many of the planet’s ecosystems to become unrecognizable.

“Our results indicate that terrestrial ecosystems are highly sensitive to temperature change and suggest that, without major reductions in greenhouse gas emissions to the atmosphere, terrestrial ecosystems worldwide are at risk of major transformation, with accompanying disruption of ecosystem services and impacts on biodiversity,” reads the abstract of the study.

Stephen Jackson, the lead author of the study, told The Washington Post, “Even as someone who has spent more than 40 years thinking about vegetation change looking into the past … it is really hard for me to wrap my mind around the magnitude of change we’re talking about.”

This summer’s extraordinary heat wave across the Northern Hemisphere was and is in no way an anomaly. Another recent study warned that there will be at least four more years of extreme temperatures. This means temperatures are expected to be warmer than expected, even above and beyond the abnormal warming being generated by ACD.

Given the fact that there are already places in the Arctic where the ground no longer freezes, even during the winter, this does not bode well.

Another recent report, What Lies Beneath: The Understatement of Existential Climate Risk by Australian researchers with the independent think tank National Centre for Climate Restoration, is blunt about the fact that we are rapidly leaving the safe zone for human habitability on the planet. They note that ACD poses an “existential risk to human civilization,” with dire consequences unless dramatic actions are taken toward mitigation. The paper also points out how climate research, including the work of the Intergovernmental Panel on Climate Change (IPCC), has consistently underplayed these risks and leaned towards conservative projections. The paper even goes on to call the IPCC “dangerously misleading” regarding its low-ball predictions of accelerating ACD.

“Climate change is now reaching the end-game,” the foreword to the report reads, “where very soon humanity must choose between taking unprecedented action, or accepting that it has been left too late and bear the consequences.”
One only need look at this past summer to see that we have, indeed, reached the end-game.

Posted by seemorerocks at 19:02