The Israeli response: "no choice but to destroy Syrian S-300 despite confrontation with Russia."

This is the only way in which I can see the zionist stete responding – and why we should be anxious. Israel does not, and never has, had any other modus operandi since its inception in 1948.

There will, no doubt be absolute panic in Jerusalem.

The western media is silent about this as is the bulk of the Israeli media.

*** BREAKING NEWS -- URGENT *** Israeli General Says Israel "has no choice but to destroy Syrian S-300 despite confrontation with Russia."

The former head of Israeli Military Intelligence, Major General AmosYadlin, says that if Russia hands over to Syria the S300 air defense system, Israel will have no choice but to destroy it in spite of a risk of confrontation with Russia!
Israeli defense analyst: ''With Putin's S-300, Assad's army could even 'lock-on' IAF aircraft as they take off from bases within Israel.''

"Israel should be worried.''
This is a developing story, updates to follow . . . .


Russia FM minister: "Russia ready to discuss with the United States the supply of S-300 to Syria - but the US should give up mentoring and attempts to present their own approaches as the only possible one"


THAT is what prompted the Russians to impose a full 'NO-FLY" Zone over Latakia, Syria today!

(This is getting out-of-hand very fast . . . .)
The Israeli Air Force said that "In terms of both quality and quantity, it could easily defeat the Russian Air Force and send missiles to Hmeimim air base in such quantity that the S-400 or Pantsir-S1 could not defend against them."


The IDF also said "Even with the advantage of on-site forces, Israeli commandos could invade the Hmeimim base and wipe out Russian air defense complexes to make it easier for fighter jets to operate."
2 USAF B-2 stealth bombers have taken off from Hickam AFB.   We note the  ‘DEATH’ callsigns.

Another RuAF IL-76 has just landed at Khmeimim AFB in Syria after flying from Russia.  Carrying more S-300 battery components for the Syrian Air Defence Forces

Russian defense minister Shoigu reacts also against US movements in Syria: "Delivery of #Russia's S300 to Syria will also stop Western coalition from carrying out uncontrolled attacks on Syrian territory"
HISTORICAL NOTE:
As the Israeli media is full of reports on supplies of Russian-made S-300 systems to Syria, it’s important to recall a statement by Israeli Defense Minister Avigdor Liberman, which was made earlier this year.
He claimed that Israel will destroy Russian-supplied S-300 air defense systems if Syria employs them against Israeli jets.

On September 24, the Russian Defense Ministry said that Damascus will get S-300 air defense systems within 2 weeks. Moscow will also boost air defense capabilities of the Syrian military expanding its integration with the Russian military. Russian Electronic Warfare (EW) systems will be also employed to prevent a threat to Russian servicemen in the war-torn country.


PERSPECTIVE
The reason the Israelis are freaking-out over arrival of the S-300 air defense missile system to Syria has to do with its effective range.
The map below shows the effective SHOOT-DOWN range of the S-300.   But the TRACKING RANGE is far greater.  Thus, a single S-300 system in Damascus could SHOOT DOWN any aircraft in the green shaded area.  This makes it impossible for Israel to continue attacking Syria. 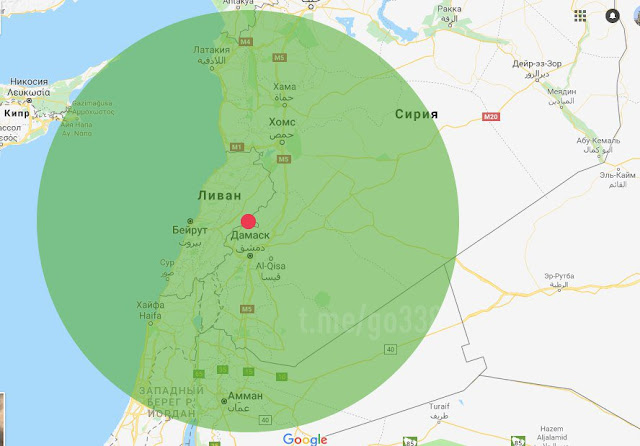 Within two weeks, Russia will arm Syria with S-300 air defense systems and start jamming navigation in the E. Mediterranean – two of the three measures announced by Defense Minister Sergei Shoigu in Moscow on Monday, Sept. 24 “in response to Israel’s role in downing the Russian IL-20” on Sept. 17.
Syria’s air defense electronic capacities will be boosted to level that of Russian forces in the country. But the most significant measure announced by Shoigu was: “Russia will jam satellite navigation, on-board radars and communication systems of combat aircraft, which attack targets in the Syrian territory, in the regions over the waters of the Mediterranean Sea bordering with Syria.”

The Russian minister stressed that if these measures “fail to cool hotheads, [He was obviously referring to Israel.], we will have to respond in line with the current situation.”

The crucial measure he announced is not the arming of Syria for the first time with S-300 systems – which Moscow withheld in the past at Israel’s request – but the jamming of navigation. DEBKAfile’s military experts point out that this the first time a major world power has declared electronic war against any country. After rejecting Israel’s version of the Ilyushin crash with 15 Russian servicemen aboard as untruthful, Moscow has thrown down the electronic gauntlet before the IDF and pitched the dispute onto a much higher elevation. This challenge confronts Prime Minister Binyamin Netanyahu and Chief of Staff Lt. Gen. Gady Eisenkot with three tough options:

Behind a paypwall this is from the realist wing of zionism 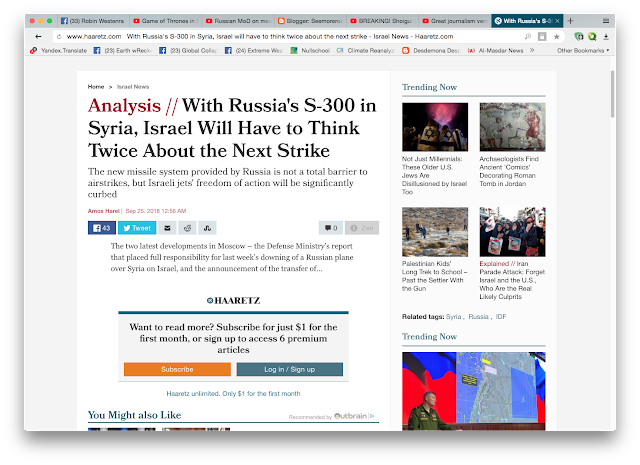 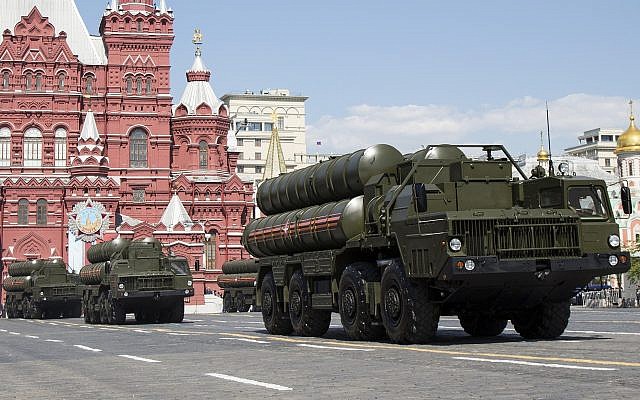 From the lunatic on the block

BOLTON: IRAN SHOT DOWN THE RUSSIAN PLANE IN SYRIA 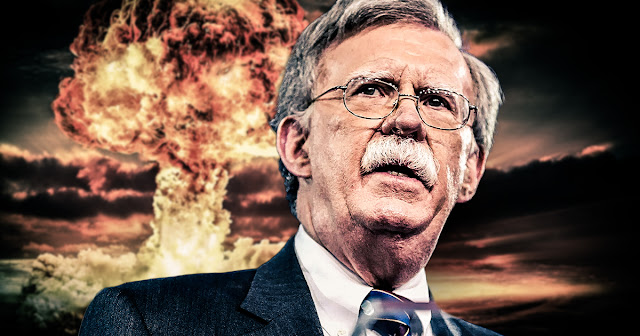 U.S National Security Adviser John R. Bolton said on Monday he hopes Russia will reconsider its plans to sell S-300 missile defense systems to Syria as that would be a “significant escalation” by Moscow, Reuters reports.


Pointing at Iran, Bolton claimed that it’s that country which is responsbile for attacks on Syria and Lebanon, as well as downing the Russian plane in Syria.


An incident that the Russian Ministry of Defense argued Israel is involved in and Israel denies, claiming it was downed by Syria.
Posted by seemorerocks at 12:30