More about the French shooting down the Russian IL-20 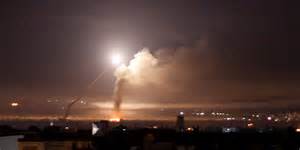 
The fog of war and geopolitics makes initial responses to the attack on Russian and Syrian forces recently difficult to assess.

Putin backed off on explicitly blaming Israel for the downing of the IL-20 ELINT aircraft which killed 15 Russian servicemen, but made it clear he holds them responsible for the attack as a whole.

My thoughts on what the goals of the attack were are the focus of my latest article at Strategic Culture Foundation.

It was obvious to me that this attack was designed as a provocation to start World War III in Syria and blame the Russians for attacking a NATO member without proper cause, since the Syrian air defense forces were the ones responsible for shooting down the plane.

Lying us into war is a time-honored American political tradition, whether we’re talking Fort Sumter, Pearl Harbor or the Gulf of Tonkin.  All of these incidents were avoidable by Presidents intent on getting into a conflict while simultaneously playing the victim card by getting the other side to shoot first.

I’m sorry if that is a controversial statement but the historical record on them is very, very clear.

The setup is pretty clear. Israel and France coordinated an attack on multiple targets within Syria without US involvement but with absolute US knowledge of the operation to provoke Russia into going off half-cocked by attacking the inconsequential French frigate which assisted Israel’s air attack.

Any denunciation of sinister intent by Israeli Defense Forces is hollow because if they had not intended to provoke a wider conflict they would have given Russia more than one minute to clear their planes from the area.

That would constitute an attack on a NATO member state and require a response from NATO, thereby getting the exact escalation needed to continue the war in Syria indefinitely and touch off WWIII.

This neatly bypasses any objections to a wider conflict by President Trump who would have to respond militarily to a Russian attack on a NATO ally. It also would reassert NATO’s necessity in the public dialogue, further marginalizing Trump’s attacks on it and any perceived drive of his for peace.

Now take that basic, honestly off-the-cuff, analysis of what happened and mix it with a skillful bit of decoding of Russia’s statements on the attacks by Fort Russ News and you have, I think, a pretty clear picture of what the intent was and why Putin seemed to downplay the event calling it a “… chain of tragic circumstances, because the Israeli plane didn’t shoot down our jet.”

My hat is off to Joachin Flores for his analysis here.  It is long and involved and worth your time to read.  I will summarize it here.  His thesis?  Putin is trying to save Russian/French relations by not naming France as the culprit for the lost plane and the 15 men.

That Russia noted French missile launches but didn’t say what or who they hit.  And before the Russians said anything about the attack the French denied they had any involvement in the attack.

Instead, Russia went along with the story the U.S. et.al. prepared in advance, which doesn’t fit what facts we know about the situation, that Syrian Air Defenses shot down the IL-20 by mistake.

Both the French denial and the U.S. statements about Syrian air defenses being the culprit came before anything official came from the Russians.

This is a classic “preparing the narrative” technique used by the West all the time.  Seize the story, plant seeds of doubt and put your opponent into a rhetorical box they can’t wiggle out of with the truth.

And Flores is exactly right that this script was going off as planned with one small problem.

The Russians went along with it.

Russia, and Putin, did the one thing that makes this whole thing look like a frame job, it accepted the narrative of Israeli malfeasance in the interest of stopping a wider conflict by accusing and/or attacking a NATO member, France.

Flores makes the salient point that the S-200 friendly fire scenario is highly unlikely.  That, in fact, France shot down the plane, was prepared to accept blame (which it did by preemptively denying it was involved) and destroy what was left of Russian/French relations.

Now Russia can use the excuse of Israeli betrayal as justification for upgrading Syria’s air defenses. Citing the very thing that caused the tragic death of their soldiers, antiquated air defense systems which didn’t properly identify friend from foe.

It may be a lie, but since when did that matter in geopolitics?

And as I point out in my other article…

This is Israel’s worst nightmare. A situation where any aerial assault on targets within Syria would be suicide missions, puncturing the myth of the Israeli air force’s superiority and shifting the delicate balance of power in Syria decidedly against them.

This is why Prime Minister Benjamin Netanyahu worked Putin so hard over the last two years. But, this incident wipes that slate clean. This was a cynical betrayal of Putin’s trust and patience. And Israel will now pay the price for their miscalculation.

Giving Syria S-300’s does not avenge the fifteen dead Russian soldiers. Putin will have to respond to that in a more concrete way to appease the hardliners in his government and at home. His patience and seeming passivity are being pushed to their limit politically. This is, after all, a side benefit to all of this for the neoconservative and globalist hawks in D.C., Europe and Tel Aviv.

But, the real loss here for Israel will be Russia instituting a no-fly zone over western Syria. Any less response from Putin will be seized upon by and the situation will escalate from here. So, Putin has to deploy S-300’s here. And once that happens, the real solution to Syria begins in earnest.

And it means that if the FUKUS alliance — France, the U.K. and the U.S. — want an invasion of Syria they will have to do so openly without a casus belli.  And this is something we have avoided for five years now.

Because lying us into war is how we maintain the illusion of fighting wars of conquest under the rubric of Christian Just War Theory which supports our national spirit of manifest destiny.