The israeli response to Russian claims


SouthFront,
23 September, 2018
On September 23, the Israeli military rejected the Russian accusation that it was behind the downing of the Il-20 intelligence plane on September 17 and insisted that the coordinate mechanism with Russia was used properly prior to the incident.

“The deconfliction mechanism operated in the relevant timeframe (as it has been operating over the last two and a half years,” the Israeli military said in an official statement.

Furthermore, the Israeli military repeated its claims that Israeli Air Force (IAF) warplanes were in Israeli airspace at the time of the downing of the Russian plane. The Israeli military went on to blame Syria for the incident once again and vowed to continue its operations against Iranian forces in the war torn country.

“The IDF [Israeli Defense Forces] will continue to operate in accordance with the directives of the Israeli Government against Iran’s incessant attempts to establish itself in Syria and to arm the terrorist organization Hezbollah with lethal and accurate weapons,” the Israeli military statement reads.

Earlier, the Ministry of Defense of Russia released a radar map that proves IAF warplanes hide behind the Il-20 before it was hit by Syrian air defense fire. The ministry also confirmed that Israel informed it only one minute ahead of the airstrike and provided false info about the location of the target.

Independent observers said that the radar map released by the Russian MoD was plausible, which indicates that Israel lied about the location of its warplanes during the incident. 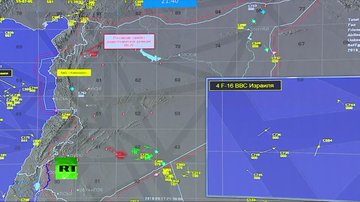 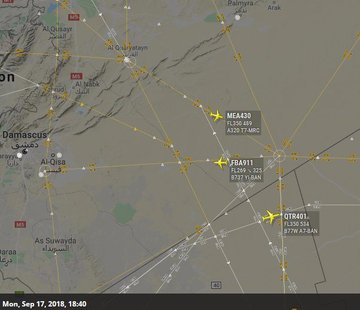 Israel’s refusal to recognize its mistake and its insistence on conducting new attacks will likely lead to more tension with Russia. The situation may escalate further if Israel launched new attacks without improving the coordinate mechanisms with Russia.

There has been absolute silence on this story in the western media - are they waiting for instructions? - but not the Israeli media.

IDF and Russian army on collision course in Syria

DEBKAfile: This exchange of insults is not helpful in the light of reports from a Kremlin source that President Vladimir Putin has decided not to let the negative MoD report mar his friendly ties with Prime Minister Binyamin Netanyahu, and to let its aspersions remain in the “professional” domain. (i.e. versus the IDF and IAF).

The IDF was rocked back by the Russian accusations (which are summarized below.) Israeli officers had pretended optimistically that all was well between the two militaries after Air Force chief Maj. Gen. Amikam Nurkin’s briefing to Russian officers in Moscow last Thursday. Then came the Russian report, which ignored the data he presented them from the IDF investigation.

DEBKAfile’ sources stress that whichever of the two armies is telling the truth and which is lying about the circumstances of the crash, overarching it all is a grave dispute that has flared between two armies belonging to opposing coalitions fighting in the same country: Russia on the same side as Syria, Iran and Hizballah; and the IDF, aligned with the US and Western allies. This is a new landscape in the constantly changing Syrian conflict and it is loaded with inflammable elements.

Putin may continue to smile at Netanyahu, while at the same time directing his defense ministry to close Syrian air space against all foreign aircraft, not just Israeli warplanes. This would shut down Israel’s air campaign for eradicating Iran’s military grip on Syria – or bring it in conflict with Russian forces. This would happen if the US and Israel decided for their part, to put Putin’s directive to the test. Therefore, just as Russia’s air force is no doubt planning its next steps in Syria, so too are the US and Israel.
The Russian MoD report summarized

DoD spokesman Maj. Gen. Igor Konashenkov said Israel’s Air Force had misled Russia about the location of its planned strikes in Syria, preventing the Russian reconnaissance plane from moving to a safe zone and leading to its destruction. “During the negotiations via the deconfliction channel, the Israeli Air Force Command reported that the targets are located in Northern Syria … [whereas] the Israeli jets delivered strikes in Latakia [in the west].”

Israel furthermore failed to warn Russia in advance about the coming operation – only just when it began, in breach of the 2015 Russian-Israeli agreements for preventing clashes between our armed forces, in and over Syria,” he said.

Gen. Konashenkov then repeated his original charge that Israeli F-16 fighter jets had used the Russian aircraft as a “shield” against Syrian air defense fire. He contradicted the IDF’s claim that its jets had reached Israeli airspace by the time the Syrian missiles hit the Russian plane, maintaining that the F-16s left the area 10 minutes after being informed of the crash.

Finally, the Russian spokesman denounced the actions of the Israeli fighter pilots – either as “lacking in professionalism” or acts of “criminal negligence.” The IAF and its superiors were therefore “entirely” to blame for the Russian Ilyushin Il-20 tragedy.

The Russian report on the air disaster challenged the earlier Israeli military probe on every key point. The IDF spokesman attributed the Russian plane crash to extensive, inaccurate Syrian anti-aircraft fire, which was indiscriminate and did not ensure there were no Russian planes in the air. The Israeli spokesman maintained that when the Syrian missiles struck the Russian IL-20, IAF jets were already back inside Israeli airspace, and that during the Israeli air raid over Latakia, the Russian plane was not within the area of the operation.