Paul Craig Roberts on Putin and the liberation of idlib 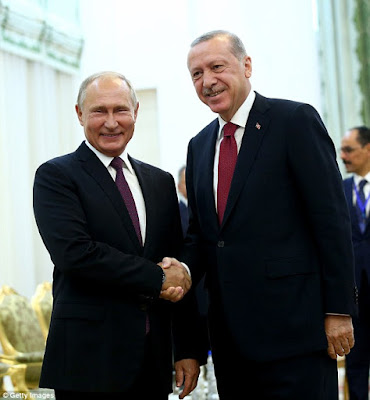 The provocations that Putin invites are now escalating. Peter Ford, former British ambassador to Syria, points out that Washington has quickly taken advantage of Putin’s hesitancy in Syria to escalate the pretexts on which Washington will launch a military attack on the Syrian forces. Formerly Washington’s pretext was to be a false flag “chemical attack” that would be blamed on Syria.  Washington’s new pretext precludes the liberation of Idlib as Washington has declared that any attempted liberation of the province from Washington’s terrorist allies will result in a US military attack on Syria.  Indeed, even a refugee flow whether or not caused by a Syrian attack is deemed to be a “humanitarian issue” that justifies a US military attack on Syria. President Trump’s Special Envoy for Syria, James Jeffrey, just announced that the United States will not tolerate an attack, period.  https://www.strategic-culture.org/news/2018/09/19/idlib-lull-before-hurricane.html


Clearly, the Syrian/Russian liberation of Idlib from Washington’s terrorists cannot now happen, unless Putin is willing to establish such air superiority over Syria, backed up by Russian weapons, that the US would be incapable of launching an attack.  Washington’s escalation of its provocations means that Putin would have to accept the risk of destroying any US attack forces that were sufficiently reckless to test the defenses.


Another puzzle is Putin’s decision to pacify Erdogan by substituting a demilitarized zone in Idlib instead of liberating the province. How did Putin and Erdogan reach the fantasy conclusion that the US and its terrorist allies in Idlib province would cooperate with their demilitarization plan?  Has Russian foreign policy dissolved into self-delusion?  https://www.globalresearch.ca/video-al-qaeda-militants-reject-demilitarization-zone-agreement-in-idlib/5654577
We are watching unfold my concern that the acceptance of provocations results in more provocations and that the provocations escalate in their danger.  What will Putin do now?  If he backs down again, he can expect a yet more dangerous provocation until the only choice becomes surrender or nuclear war.
Washington’s provocations would not have reached the current level of intensity if Putin had put his foot down several provocations ago.  Indeed, the entire Syrian crisis would have been over except for the repeated hesitations and premature withdrawals of Russian forces.
Does the Russian government not understand that Washington is conducting war against Russia, not against terrorists?