IMPORTANT article on yesterday's downing of the Russian IL-20

I wrote about this yesterday. The article has now been posted. 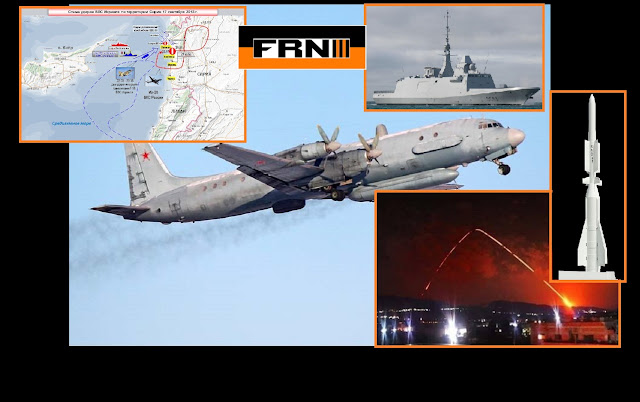 
Russia appears to be involved in an appropriate and strategically prudent disinformation campaign to avoid any further irreparable damage in Franco-Russian relations. FRN will analyze why it is most probable that France took down the Russian Il-20 military aircraft, and not the SAA air defense systems as first Israeli, and then Russian media have today begun to officially report.


It will be critical of course to establish the key necessities in making the case. Means, motive, and opportunity. Once these are established, we then proceed to establishing that this is the most probable case even as others had one, two, or even all three of these and this will be done in part by countering some of the nevertheless intelligent but imperfect reasoning now being printed regarding possible theories. In general, the pro-Russian media sphere is at this time ‘following up’ on the quite recent Russian official pronouncements that the SAA themselves accidentally shot down the Il-20, even while nominally blaming Israel and naming it ‘responsible’ for the incident.
What the Russians claim is that Israeli craft using the Il-20 for cover ‘confused’ the SAA system and that the SAA system hit the Russian Il-20. We will explain that while this is possible, it is unlikely, and in fact the least likely of any realistic scenarios given the tremendous preparation and planning that goes into these events.
Why France?
The US wants to further damage Franco-Russian relations. France under multiple governments since 2011, has called for Assad to step down, and has already threatened ‘military action’ against Syria, so relations between these two countries are already ‘ruined’. But relations between France and Syria aren’t critical for peace, stability, and the general project for Eurasian-European integration. However, Franco-Russian relations are very critical, and while it’s been noted previously by experts that the aim of the U.S is to permanently poison EU-RF relations, Russia therefore is the obvious party that has the least interest in escalating tensions or further souring relations with France.
We can see this in any number of cases, but specifically  in how they dealt with the Turkish downing of the Russian plane a few years ago over Syrian skies. Their aim was to de-escalate, and ultimately show that the Turkish pilot involved was part of a directly NATO controlled part of the Turkish military that was operating, essentially ‘rogue’ and not under Erdogan’s orders. When the coup attempt happened later, this same Turkish pilot was named in that group of anti-Erdogan coup-plotters. Russia did not use the opportunity to try to further worsen ties with Turkey. In fact, they used the opportunity to eventually strengthen ties with Turkey. This was wise, and most prudent, regardless of what actual facts were in play.
Last night Lattakia was attacked by navy assets off the Syrian coast, as well as Israeli airforce, and Russia appears to be saying it was ‘also’ France insofar as they report that ‘French missile launches were detected’ during the attack. FRN is clear that Russia ‘appears’ to be saying it was France that hit Lattakia, but isn’t saying this conclusively. This point will be explained.
This is an observational approach to information sharing, rather than deductive or conclusive. It also runs the two lines of information together, without necessarily connecting them. Russian official announcements, and Russian state run or synergy media like Sputnik, have all run the story the same way – running the two lines of information together, back to back, without necessarily connecting them causally or deductively. This will be important in untangling what Russia is officially, vs. not officially saying regarding the downing of the Russian Il-20 military aircraft off the coast of Syria and the death of 15 of its crew. The following screen shot with arrows and explanation added by FRN is meant to help prove and illustrate how Russian media is approaching this question.
.

.
So we have a Russian plane downed possibly by French Naval ship, or by the SAA air defense forces protecting Lattakia itself. The second proposition is least credible. So let’s now look at how the story looks specifically about the downed Russian Il-20 military aircraft. Hopefully, in terms of the veracity of FRN’s claims, Sputnik refrains from changing its textual presentation here, so nevertheless we provide screen shots immediately below which will allow us to see two things.

One, that the pattern fits the same as the screen shot above, an event is registered as happening, and the activities of another party are named, but no connection is specifically made. Fact 1 and Fact 2 are divided. The reader is left to make of it what they will.
If this led some readers to ‘mistakenly’ conclude at first that France had something to do with the take down of the Il-20, they would, by Russian accounts, be ‘officially’ wrong, but most probably right. We can see the same Russian official method of information dissemination is used in the above screen shot, but in fact and indeed, Russia is not specifically ruling out that the registered missile launches had something to do with what hit Lattakia.

At the same time, (and this gets more complicated, but referring to the above map will help,) we propose instead that something else happened. Israeli warplanes hit Lattakia, and perhaps Israeli ground systems were also aimed and hit Lattakia (we have no reports of the latter), and perhaps also French naval vessels’ missiles hit Lattakia, but again this last point is not in fact established by Russian media per se. If Russia later revises or updates this story has events emerge, and diplomatic interactions take a certain, or more clear, or more definable direction, then perhaps Russian reportage on this will change, retroactively. But this is where the infowar stood at the time of the events, and through the early afternoon of September 18th, Belgrade time.
Secondly, readers will take note of the inclusion of the French denial. This French denial is bizarre and entirely out of place, since no one accused France. Do innocent parties randomly and yet officially deny involvement in things of which they are not formally accused? In most cases, no they do not.

The Russian Defense Ministry has shared a map of the September 17 attack in Syria.

From Sputnik, also:
<<“Israeli Side Is Fully Responsible For Il-20 Crash” – Russian defense minister
“The Russian Defense Ministry has repeatedly called on the Israeli side to refrain from attacks on Syrian territory, which threaten the security of Russian servicemen,” the Russian Defense Ministry said.
“Israel is fully responsible for the crash of the Russian Il-20 military aircraft off the coast of Syria and the death of its crew”, Russian Defense Minister Shoigu stated.
It’s highly intelligent on the part of Russia, for many reasons, that they blame Israel for this, if the option is France. Russia refuses to countenance steps leading to any war when other means are clear & available.
Arrangements are in place to obviate the possibility of any kind of inadvertant US or NATO strike on a Russian asset. The situation in Latakia was complex and all details clearly have not yet been ascertained. But outright war is no answer whatever emerges ultimately. This was the thought process of Russian authorities, and the basis as well, of their disinfo campaign.
It also makes perfect sense why they couldn’t accuse Israel of actually taking down the plane. They did not, and the physical evidence could never establish that. Those familiar with the ins and outs of the MH-17 case show that a BUK system attack is not commensurate with the physical remains of the MH-17. In that case, it was attacked by another plane, an attack plane. For these reasons, the Atlanticists have not dealt with the physical evidence, which they are in charge of, but which DPR people and independent journalists were fortunately able to collect before NATO came in and did clean up.
<<Il-20 Crash Site in Latakia Province is Located>>
“At the moment, the location of the plane’s crash is found 27 kilometers to the west of the village of Banias [Latakia province],” the ministry said.
Russian Defense Ministry Views Provocative Israeli Actions in Syria as Hostile
“We see these provocative actions of Israel as hostile,” Konashenkov said, adding that 15 Russian servicemen were killed as a result of the “irresponsible actions” of Israel’s Defense Forces, which violated “the spirit of the Israeli-Russian partnership.”>>