This comes with the usual caveat. This is based on intelligence leaks from private sources and so is not verified. The first story at least, has the ring of truth about it especially after the Russian MoD’s press conference yesterday. 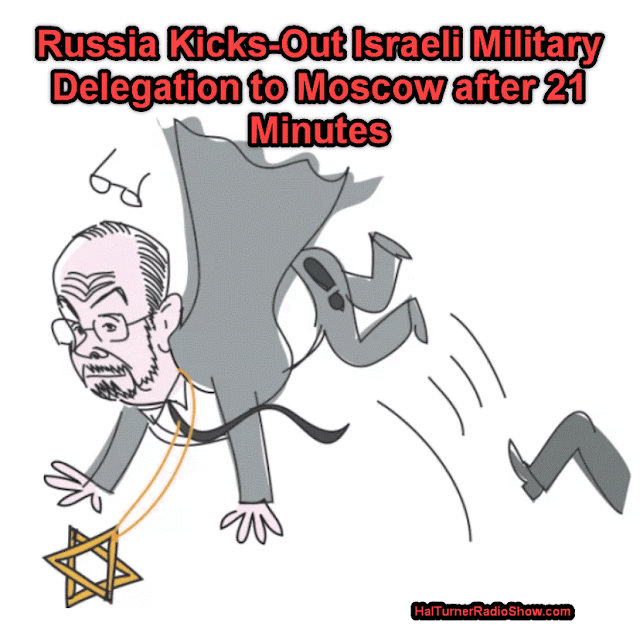 The highest ranking members of Israeli military traveled to Moscow to explain and talk about the shoot down of a Russian IL-20 Electronic Intelligence Aircraft during an Israeli attack upon Syria. The Israelis wanted to meet with President Putin and Russian military leaders to explain what THEY say took place. It didn't go well.

Russian Military leaders listened to Maj. Gen. Amikam Nurkin, Israel’s Air Force chief and, my covert Intelligence Sources tell me, "the Russians got almost immediately ticked-off." My former Intel Colleagues (from my years with the FBI Joint Terrorism Task Force) said "The Maj. Gen. from Israel immediately went into "deflection mode" trying to blame the Syrians for what the Israeli's did. The Maj. Gen. decried the Syrians as almost incompetent in the way they use their air defenses, and condescendingly expressed surprise they haven't actually shot down more planes by accident." When the Russians heard that, it was all but "game over" for the Israeli delegation.

The Major General from Israel apparently didn't realize (or perhaps didn't care) that when he said such things about the Syrians, he was actually insulting the Russians because he made it appear that the Russians didn't train the Syrians properly! It went over like a lead balloon.

Making matters worse, when Russian military members began asking Maj. Gen Nurkin specific questions, he was completely unprepared to answer them, saying he would have to check with his government first. This was the actual end for the meeting as Russians decided the Israelis had come to propagandize instead of answer questions. It seemed to the Russians that the Israelis were trying to blame anyone but themselves for what took place.

The Russians then abruptly interrupted. They told the Israelis the Russian plane was only 31/2 MINUTES away from landing at Hmeymim air base in Syria when the shoot-down took place. They told Israel that Israeli fighter jets "sneakily shadowed" the much larger Russian aircraft to use it as radar cover for Israeli missile launches. They said the Israelis did this on purpose; then threw the Israelis out of the meeting after a grand total of . . . . 21 minutes.

The Israeli military members described the meeting as "tense and very
threatening."

Suffice it to say there is REAL trouble between Russia and Israel.

The media of Israel is already "spinning" the meeting as having lasted for "hours." That's flatly wrong. From start to finish, the meeting lasted twenty-one minutes.

I earnestly hope the Israelis and Russians work this out. The world does not need even more trouble in the Middle East.

ISRAELI F-16's **INTERCEPTED** BY RUSSIAN WAR PLANES OVER LEBANON; Forced back to Israel

There has been no official confirmation from Russia or Israel.
It was the first time in months that Russian planes had entered Lebanese airspace from Syria.

Israeli jets reportedly often fly over Lebanese airspace conducting reconnaissance missions. Reports have also said that many of Israel’s attacks on targets in Syria have been launched from Lebanese airspace.

Earlier this month Prime Minister Benjamin Netanyahu said he had no reason to believe the Kremlin would try to limit Israel’s freedom of operation in the region.  It now appears Netanyahu was wrong.

In light of the heavy Russian presence in Syria, Israel in September 2015 set up a mechanism with Moscow — involving work groups led by the deputy chiefs of both militaries — to avoid conflicts and potentially fatal misunderstandings.

However, senior air force official stressed that this system was limited: Israel does not inform the Russians before conducting airstrikes in Syria, nor does Russia let the Israelis in on its plans.
On Monday, Israel launched a missile attack upon Syria using F-16's over the Mediterranean Sea.  Those F-16's intentionally operating very close to a much larger Russian IL-20 Electronic Intelligence aircraft, using that aircraft as a sort of radar cover.
When Syrian defenses opened fire to stop the inbound missile attack, they locked-onto the RUSSIAN plane and shot it down.
Russia blames Israel for using a Russian plane to launch a sneak attack, causing the deaths of 14 or 15 Russian airmen.
After this incident, Russia basically imposed a NO-FLY zone upon Israel by announcing sea and air live-fire exercises in the eastern Mediterranean off the coasts of Syria and Israel.  No Israeli war planes are permitted to fly outside the territory of Israel unless they do so at an altitude above 19,000 feet.  At such altitude, they would be easy targets for Syrian air defenses.
Below that altitude, Israeli planes would be "in the way" of an announced Russian military exercise where they could "accidentally" be hit by missiles from Russian naval vessels.
Israel apparently decided to TEST whether Russia meant what it said, and the Israelis sent up two F-16's to fly into Lebanon at an altitude BELOW 19,000 feet.  Those planes were intercepted by Russian SU-34's and forced to turn back to Israel.
Su-34 is not just a bomber, it is very capable fighter too.
Avionics
No additional information is being released about the interception.

Russia has just announced that when they complete their "military live-fire exercises" in the waters off the Syria Coast, they are CLOSING THE AIRSPACE Over Syrian Territorial waters along the entire coastline.  NO UNAUTHORIZED AIRCRAFT will be permitted to enter air space over Syrian Territorial Waters.  Violators risk being shot down without warning.
This now means the only area Israel can use to attack Syria is Lebanese airspace but . . . .
**** The Syrian army now has permission from Lebanon to fire at Israeli planes that are in Lebanese airspace. ****