Supercells are huge collections of stormclouds bunched together, with rotation. They often generate tornados, as happened recently in Ottawa, and a few days later, in Detroit. As rapid climate change proceeds, and the speed, waviness, location, and nature of jet streams changes, it is possible that “Tornado Alley” in the US will shift northward, and impact northern states and Canada greatly. 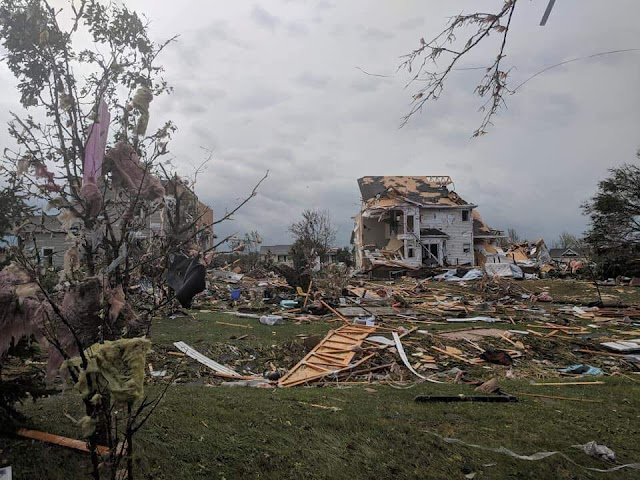 
Word of Friday's tornado in the Ottawa region reached Laurel Wingrove and Alex Carlson at a Toronto wedding, and by Sunday morning they completed the grim pilgrimage back to the apartment they've called home for four months.
Almost nothing was waiting for them.
The roof was sheared off, the second storey of the edifice was open to the sky. Shredded and twisted shards of wood and metal filled the yard, where two crushed cars were parked. A large trash dumpster was flipped on its side.
"It could have been worse if we were here. Our bedroom's upstairs," said Carlson, 24.
"It's gone," added Wingrove, 25.
Their rural Ottawa neighbourhood of Dunrobin was one of the worst hit areas as twin tornadoes tore through Ottawa and across the Ottawa River to Gatineau, Que., on Friday. On the Ottawa side, 51 homes were destroyed or severely damaged, and this neighbourhood saw the "brunt of the damage," said Mayor Jim Watson.

The national weather agency said a powerful twister — with winds that reached 265 kilometres per hour — ripped through Dunrobin, about 35 kilometres west of the downtown area, before moving on to Gatineau.
Environment Canada said that at almost the same time a second, slightly less powerful, twister touched down in the south Ottawa neighbourhood of Arlington Woods.
The tornadoes caused massive damage, thrashing homes, tossing vehicles, snapping huge trees and injuring several people, at least two of whom were admitted to hospital in critical condition.
Throughout the Canadian capital region, shaken residents began returning to some of the hardest hit areas, taking stock of what was lost and trying to figure out what remained. For those facing uninhabitable destruction, police, firefighters and other emergency workers were helping them recover important documents, including identification.
For Wingrove and Carlson, some relief came quickly. A volunteer firefighter emerged with a set of file folders. Their passports were inside. Several minutes later, a smiling firefighter handed Carlson a silver laptop computer — the one that had valuable information about two business ventures.
"The community is going to come together. And everyone's making sure we're OK," said Carlson, who is also a volunteer firefighter. On Sunday, he was on crutches and wearing a cast on his left ankle — a result of one-month-old injury that sidelined him from the recovery efforts.

Ontario Premier Doug Ford toured Dunrobin on Sunday and pledged the province's full support to Ottawa residents recovering from Friday's tornadoes as he met with some of those hardest hit. Ford made the promise after meeting more local residents, returning to homes that the tornadoes had in some cases levelled, in the pastoral Dunrobin area littered with snapped power lines and scattered branches.
"We can replace the infrastructure, and we will. We will spare no resources in the province," Ford said, noting it was a blessing that nobody was killed.

Meeting displaced residents at a local high school, Ford offered his sympathies and reassurances.
"We're putting the resources in, we are going to get it done," he told a sobbing woman seeking refuge at the school. "It's devastating."
"It is," she replied.
The premier was accompanied by Watson as he toured houses ravaged by the twister before it jumped the Ottawa River to Gatineau, Que.
"A lot of us have never seen anything like it," he said of the destruction. "It's shocking."
Ford later visited a public park in the Barrhaven area in Ottawa's south end, where volunteers had set up plastic tables in a field to feed 1,000 people their Sunday dinners. Loudspeakers blasted classic rock music, while candles lit the public bathrooms of the adjacent community centre.
"We'll get everyone back on their feet," Ford told an afternoon news conference.

Hydro crews working around the clock

Hydro crews — including extra workers from across Ontario — were working around the clock to untangle and repair fallen power lines and restore electricity to the region.
Friday's tornadoes and thunderstorms in eastern Ontario caused power outages to approximately 400,000 customers, Hydro One said Sunday night.
The utility said about 36,000 customers remained without power on Sunday night, while Hydro Quebec reported approximately 4,000 customers in the Outaouais region, which encompasses Gatineau, were blacked out.
"Throughout the weekend, our crews have worked tirelessly to get the lights back and we believe the majority of customers will have their power back by tonight," Hydro One CEO Greg Kiraly said in a release.
Bryce Conrad, the president of Hydro Ottawa, said some areas would not have power on Monday or this week. He has compared the damage to the city's power grid as being on the magnitude of the debilitating ice storm of 1998. A key power station was knocked out by the tornadoes, and Conrad said it looked like it was bombed.

The lack of power meant a reduced work day for many on Monday with two local school boards announcing closures for the day. City officials, including the police chief, urged people to work at home or take the day off.
With 400 traffic lights still dark, they were trying to avoid rush hour chaos.
The Treasury Board and Statistics Canada also posted tweets Sunday telling their employees in Ottawa and Gatineau to stay home Monday, and if possible, work from there.
The Ontario government announced Saturday that it was activating the province's Disaster Recovery Assistance program in affected areas, while the Quebec government announced it would give the Red Cross $1 million to help with relief efforts.
Prime Minister Justin Trudeau said Sunday that he'd spoken with the mayors of Ottawa and Gatineau to discuss "how the community is recovering from the damages."
Trudeau, who was in Montreal to meet with the prime minister of Spain, also said he offered federal help to those in need.
Ford said it was too soon to put a dollar figure on the damage. He praised the non-partisan co-operation of the municipal, provincial and federal governments.
"It's amazing how everyone comes together. Forget the political stripes, they're out the window. We're a community, we're team Ontario, and we work together."