It is very unusual for any of my sources on geopolitics to reference climate change, albeit not the full truth.

The Trump administration admits that climate change will increase the global temperature more than anticipated:

Last month, deep in a 500-page environmental impact statement, the Trump administration made a startling assumption: On its current course, the planet will warm a disastrous 7 degrees [Fahrenheit] by the end of this century.


A rise of 7 degrees Fahrenheit, or about 4 degrees Celsius, compared with preindustrial levels would be catastrophic, according to scientists.

That increase though, says the Trump administration, is no reason to stop emitting gases that, for a large part, cause such warming:

But the administration did not offer this dire forecast, premised on the idea that the world will fail to cut its greenhouse gas emissions, as part of an argument to combat climate change. Just the opposite: The analysis assumes the planet’s fate is already sealed.

"The child already fell into the well, there is no longer any need to cover it."

The administration uses such faulty reasoning to eliminate regulations that are supposed to limit 'greenhouse' gas emissions. It is set to allow higher emissions from cars and trucks.

For millions of years plants on earth used the energy from the sun to convert carbon dioxide and water into hydrocarbons. Where those plants were later covert with volcanic ash or sunk into the sea, geologic pressure and time converted them into coal, oil and gas. Since the start of industrialization humans have used an enormous amount of these dead plants to generate energy. Coal, oil and natural gas - the hydrocarbons - oxidize in exothermic reaction. They burn and give off heat which humans transform into various kinds of usable energy. The emissions from such fires are basically the stuff from which the plants were created - carbon dioxide and water.

A large part of the energy from the sun that hits the earth is reflected back into space. Carbon dioxide and other gases (Methane) in the atmosphere lower the reflection rate of the earth, they trap the energy (heat) the sun shines onto earth within the atmosphere just like the glass of a greenhouse traps the heat inside. Spectroscopic measurements from space over several decades show a decrease of reflections from earth at the spectral range of carbon dioxide. Long term measurements on earth of carbon dioxide concentrations correlate strongly with the general temperature increase.

All this is well known and not controversial. But, as John Maynard Keynes said, in the long term we are all dead. Humans are not willing to give up on their personal comfort and profits for the benefits of far away future generations. The 2015 Paris agreement to limit carbon dioxide emissions was largely a scam. Hardly any country stuck to the endorsed targets. After the Fukushima disaster the Merkel government in Germany decided to shut down nuclear power plants but increased the use of brown coal for electricity production. It was a 'populist' decision, sold as a "green" policy even as it was the opposite, and contradicted the commitment to decrease emissions. The Obama administration allowed a huge increase in fracking which, next to the hydrocarbons, releases a large amount of other greenhouse gases.

The decision by the Trump administration is wrong. Yes, we will likely not be able to stop a global temperature increase in next few decades. But future generations also deserve our compassion. We must still do our best to limit the long term increase by ending the use of hydrocarbons wherever possible.

It will not be easy to replace hydrocarbons as a source of energy. Large amounts of electric energy are difficult and expensive to store. We need a certain locally distributed base capacity in our electricity networks to provide energy when the sun does not shine and the wind does not blow. For now nuclear energy is still the most climate friendly way to generate this base capacity. It also creates highly toxic waste that is extremely difficult to get rid of.

The effects of climate change, higher temperatures, rising sea levels and generally more extreme weather, will hit the poorest people the most. This within the U.S. as well as in a global frame. The consequences will be mass migration on a never before seen scale, widespread lack of consumable water and large violent conflicts arising from both.

Two countries may hope to profit from the rise in global temperature as it will increase their access to natural resources that are currently covert by ice. The U.S. (with Canada) and Russia may be the winners of the trend. Most other countries will be losers.

While short term human greed will likely prevent a reduction in hydrocarbon use, and a slowing down of climate change, there may be other effects that could suddenly turn the trend. A large volcanic eruption or a big asteroid impact could cloud the earth and bring back (much) colder times. Some yet unknown effect in the atmosphere that is not anticipated in current climate models could stop or reverse the current trend.

The human race is able to adopt to extreme climates. Humans can live in deserts as well as in the arctic. But such extreme climate zones do not allow for high density populations. The current number of people on this planet may prove to be too high to sustain. Climate change itself, through large scale conflicts and famines, may well provide for its own natural regulation. Reduced to some 100 million individuals humanity may well survive. Nature will not be compassionate in effecting such.

Here is the original item 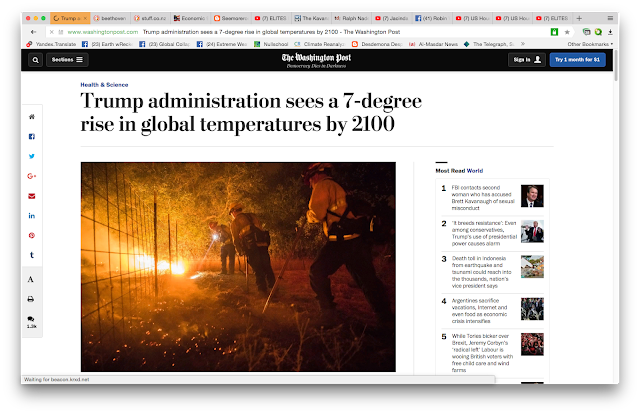 Here is the original item

Posted by seemorerocks at 20:05