The mystery of Environmental Coffee House and Sandy Schoelles

Certain people just seem to bring trouble with them so I have been happily unsubscribed from Hambone's HumptyDumptyTribe for some time.

However, when I woke up this morning I was alerted by a friend to this video from Hambone, who is desperately wondering what has happened to Sandy from Environmental Coffee House.

Hambone, who is on very good terms with Sandy was left wondering what had happened after being unable to contact her, even by phone, for several weeks after a large party at Sandy's place to "celebrate" that we have escaped extinction for another year (sic).

Hambone links all this in with a couple of characters he found suspicious and came to the conclusion (seeing this was presumably the last time we heard from her - which turns out to be not quite true) that she is lying in a watery grave off Martha's Vineyard.

He followed it up a couple of hours later with this where he discovered that Sandy's disappeared You Tube channel was back up but with no content and with the face of the same "Antonio" he mentions in his video.

To make the conspiracy even more worrying there is also a picture of the very same place where Sandy allegedly met her untimely end.

By the time I saw it it did now have some content mostly videos from "Antonio" (interestingly, the next day a video taken on board the boat has been removed). 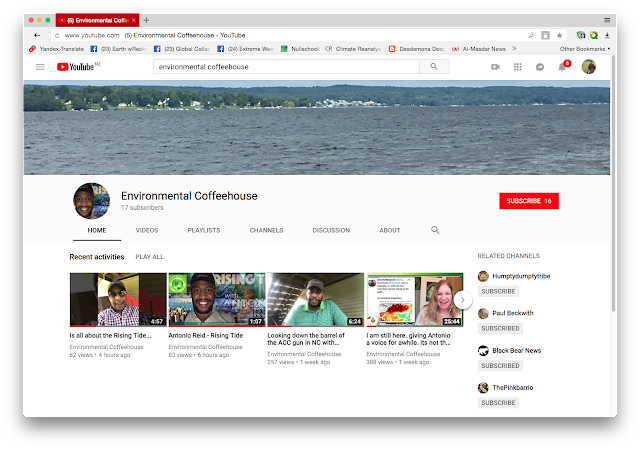 While following this up out of the blue I got a message from what did appear to be Sandy which indicated that she was still alive. This was followed up by a video conversation which confirmed that she was indeed alive and well.

Information that has come my way  (including the comment below) l this leaves the question of whether Hambone was sincerely concerned for the welfare of his "sister' or whether he knowingly spread rumours that were fake.

I shall be commenting on this further.

In the meantime I have removed personal detalls relating to Sandy as none of this, as far as I know relates to her personally.

Here are my reflections as of yesterday when I put this together.


Was I entirely mollified by this explanation? No I can't say I was. I am still concerned for Sandy and for her welfare.

"And then Hambone made his goofy video. It was just a joke"

If Hambone was making a joke he was doing a very good job of it. Even listening over the video again it is clear that he was as serious as he ever is and wanting to hear from Sandy who he describes as a "sister"

It seems to me he was very worried and not making a joke that went wrong.

I may well be still reading more into this than meets the eye but it seems to illustrate both the atmosphere of repression in America as well as the paranoia that is abroad amongst those who are a little more aware of things than the conditioned masses.

Whether it is an insurance company that wants to drop someone with a serious injury off its books because they sit down and make videos or whether threats have been made by representatives of the Intelligence community (or whoever) it does not matter.

Nobody trusts anything or anybody, they associate the police with the Deep State (so it does not even occur to them to call the police) and people are frightened into silence for whatever reason.

"Oh you just THINK you talked to Sandy. The Deep State has voice mimicking technology down to a perfect "T"." (comment on You Tube)

This impression has been reinforced by being contacted by Debbie, Sane Progressive. She said she was withdrawing from Facebook and making a request to remove all the videos with her that I had posted to mirror videos that were taken down by Facebook or You Tube.

Fair enough, but the requests became more and more insistent that I was left with the distinct impression that she may be under some untoward attention from the Deep State and she had become fearful.  Why else does a fearless commentator suddenly want all her videos removed?  - all traces.

It appears to me that people who are trying to bring the truth are under attack and many people who previously had real guts are starting to buckle under pressure.

It does not necessarily take the form of a knock at the door at midnight and a trip to a concentration camp.

The feeling is very familiar.

America is turning into a tyranny and the only way  to survive (not thrive unless you have made your first billion) is to stay silent and be invisible (as if that was possible in the NSA Surveillance State).
Posted by seemorerocks at 15:01