If this latest revelation from the New York Times doesn't drive President Trump to fire Deputy Attorney General Rod Rosenstein, or convince Congress to impeach him, then we can't imagine what would.

In a shocking report citing a bevy of anonymous DOJ officials, the NYT recounted on Friday an aborted mutiny attempt organized by Rosenstein, who allegedly tried to organize members of Trump's cabinet to invoke the 25th amendment to oust Trump from office. In an attempt to persuade the clearly reluctant members of Trump's cabinet, Rosenstein suggested that he or other officials should secretly tape Trump "to expose the chaos" he said was engulfing the West Wing. According to NYT, the sources were either briefed on Rosenstein's plans, or learned about it from the files of former FBI Deputy Director Andrew McCabe, who was fired after being disgraced by an inspector general investigation. ABC News, which also reported the story, cited sources familiar with McCabe's files. A grand jury is also weighing whether to press charges against McCabe for allegedly misleading the inspector general.

Mr. Rosenstein made the remarks about secretly recording Mr. Trump and about the 25th Amendment in meetings and conversations with other Justice Department and F.B.I. officials. Several people described the episodes, insisting on anonymity to discuss internal deliberations. The people were briefed either on the events themselves or on memos written by F.B.I. officials, including Andrew G. McCabe, then the acting bureau director, that documented Mr. Rosenstein’s actions and comments.

None of Mr. Rosenstein’s proposals apparently came to fruition. It is not clear how determined he was about seeing them through, though he did tell Mr. McCabe that he might be able to persuade Attorney General Jeff Sessions and John F. Kelly, then the secretary of homeland security and now the White House chief of staff, to mount an effort to invoke the 25th Amendment.

According to the NYT, this all happened during the spring of 2017, shortly after Trump cited a letter that Rosenstein had penned criticizing former FBI Director James Comey's handling of the Clinton probe as justification to fire Comey. Rosenstein reportedly felt he had been "used" by the president as an excuse to fire Comey. Rosenstein soon began telling colleagues that he would ultimately be "vindicated" for his role in Comey's firing. Around the same time, he began to express his displeasure with Trump's handling of the hiring process for Comey's replacement.

The president’s reliance on his memo caught Mr. Rosenstein by surprise, and he became angry at Mr. Trump, according to people who spoke to Mr. Rosenstein at the time. He grew concerned that his reputation had suffered harm and wondered whether Mr. Trump had motives beyond Mr. Comey’s treatment of Mrs. Clinton for ousting him, the people said.

During their discussion, Mr. Rosenstein expressed frustration at how Mr. Trump had conducted the search for a new F.B.I. director, saying the president was failing to take the candidate interviews seriously. A handful of politicians and law enforcement officials, including Mr. McCabe, were under consideration.

Rosenstein also tried to recruit some of his would-be co-conspirators to surreptitiously record Trump in the Oval Office.

Mr. Rosenstein then raised the idea of wearing a recording device or "wire," as he put it, to secretly tape the president when he visited the White House. One participant asked whether Mr. Rosenstein was serious, and he replied animatedly that he was.

However, although Rosenstein "appeared conflicted, regretful and emotional" during what can only be described as a coup attempt against a sitting president, even the paper admit that his conduct in attempting to solicit the illicit wiretapping of a sitting president was extremely reckless and unwarranted, and that, if uncovered, it could be used as grounds to fire Rosenstein.

If not him, then Mr. McCabe or other F.B.I. officials interviewing with Mr. Trump for the job could perhaps wear a wire or otherwise record the president, Mr. Rosenstein offered. White House officials never checked his phone when he arrived for meetings there, Mr. Rosenstein added, implying it would be easy to secretly record Mr. Trump.

The suggestion itself was remarkable. While informants or undercover agents regularly use concealed listening devices to surreptitiously gather evidence for federal investigators, they are typically targeting drug kingpins and Mafia bosses in criminal investigations, not a president viewed as ineffectively conducting his duties.

In the end, the idea went nowhere, the officials said. But they called Mr. Rosenstein’s comments an example of how erratically he was behaving while he was taking part in the interviews for a replacement F.B.I. director, considering the appointment of a special counsel and otherwise running the day-to-day operations of the more than 100,000 people at the Justice Department.

The Times and ABC reported that Rosenstein told McCabe that he believed Attorney General Jeff Sessions and then-Homeland Security Secretary John Kelly would go along with the plan. Another source said they believed Rosenstein was being sarcastic when he  made the comment about recording Trump

One source who was in the meeting confirmed that Rosenstein did make a remark about recording Trump with the use of a wire. But the source insists: "The statement was sarcastic and was never discussed with any intention of recording a conversation with the president."

Rosenstein has decried the story as "factually incorrect" and said that "based on my personal dealings" with the president, that there isn't any basis to invoke the 25th amendment. This, of course, is tantamount to a deep state insider admitting that there is no factual basis to impeach Trump.

"The New York Times’s story is inaccurate and factually incorrect," he said in a statement. "I will not further comment on a story based on anonymous sources who are obviously biased against the department and are advancing their own personal agenda. But let me be clear about this: Based on my personal dealings with the president, there is no basis to invoke the 25th Amendment."

A lawyer representing McCabe told CNN and the Times that his client had documented his conversations in Rosenstein in a series of memos, which he later turned over to Mueller more than a year ago. However, a set of those memos was left at the FBI when McCabe departed.

McCabe's lawyer, Michael Bromwich, said in a statement to CNN that his client "drafted memos to memorialize significant discussions he had with high level officials and preserved them so he would have an accurate, contemporaneous record of those discussions."

"When he was interviewed by the special counsel more than a year ago, he gave all of his memos - classified and unclassified - to the special counsel's office. A set of those memos remained at the FBI at the time of his departure in late January 2018. He has no knowledge of how any member of the media obtained those memos," Bromwich added.

The Washington Post reported that FBI lawyer Lisa Page (the former lover of disgraced FBI special agent Peter Strzok) was also at the meeting where wiretapping was discussed. WaPo also said that McCabe had pushed for the DOJ to open an investigation into the president, to which Rosenstein replied, "what do you want to do Andy, wire the president?"

While Rosenstein and Trump clearly never saw eye to eye, the level of resentment that Rosenstein harbored toward the president was not previously known. Unsurprisingly, the story has already fired up speculation  that Rosenstein may have been the anonymous administration official who penned a critical op-ed that was published earlier this month in the New York Times. Underscoring the seriousness of these allegations, CNNreported that the McCabe memos that were described to ABC and the Times have been turned over to Special Counsel Robert Mueller.

Twitter Ads info and privacy
Rosentein has been working as a public servant since clerking for a federal judge after graduating from Harvard Law School, according to the Times, which also notes that Rosenstein also considered appointing James Cole, a former Deputy AG, as special counsel. Cole, the Times noted, was a lawyer and longtime confidant for close Clinton associate Sydney Blumenthal.

Rosenstein, 53, is a lifelong public servant. After graduating from the University of Pennsylvania and Harvard Law School, he clerked for a federal judge before joining the Justice Department in 1990 and was appointed United States attorney for Maryland. Mr. Rosenstein also considered appointing as special counsel James M. Cole, himself a former deputy attorney general, three of the people said. Mr. Cole would have made an even richer target for Mr. Trump’s ire than has Mr. Mueller, a lifelong Republican: Mr. Cole served four years as the No. 2 in the Justice Department during the Obama administration and worked as a private lawyer representing one of Mrs. Clinton’s longtime confidants, Sidney Blumenthal.

The story is bound to revive suspicions about the FBI's role in trying to stifle the Trump presidency, an d further erode the bureau's already damaged credibility. As Arthur Schwartz put it, enough is enough:

In the turbulent days after the firing of James B. Comey, the deputy attorney general appeared conflicted about his role and wanted to expose administration dysfunction, people around him said.
nytimes.com

Twitter Ads info and privacy
And if you still had any lingering doubts that the deep state doesn't exist...well... 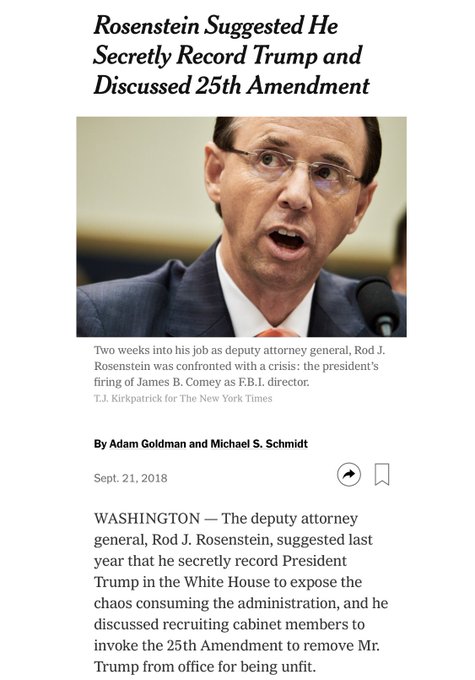