Assad said Americans should leave Syria, Pentagon responds
Assad says he would oust the Americans by force, if necessary 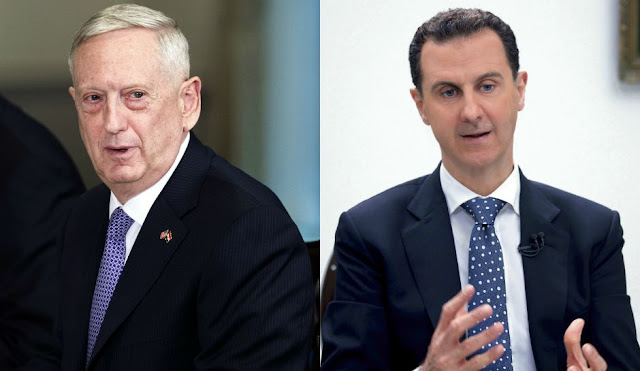 
President Assad was just interviewed by an RT correspondent, wherein he stated that he wanted to liberate the entirety of Syria’s territory. Towards that end, he indicated that America was opposing this goal and backs the SDF against Assad, refusing to return Syrian territory as long as Assad remains in power. Assad declared that he would work with them as much as possible to achieve the liberation of Syrian territory through diplomacy, if possible, but where the SDF and American forces refuse to negotiate or compromise, that he would oust the Americans by force, if necessary.

US troops are not leaving Syria and any attempt to remove them by force will be met with an armed response, a top Pentagon official said, reacting to Syrian President Bashar Assad’s RT interview.

“Any interested party in Syria should understand that attacking US forces or our coalition partners will be a bad policy,” Director of Joint Staff Lieutenant General Kenneth McKenzie said at the Pentagon press briefing on Thursday.

Over 2,000 US troops in Syria are embedded with the SDF in the northeast as well as in the enclave of At-Tanf in the south, along the Jordanian border. McKenzie said the US troops and their local militia allies were staying in Tanf, quashing rumors of their impending withdrawal.

“We are there. Nothing has changed,” he said. “The maintenance of that deconfliction zone is important and we would view very gravely any actions that tended to change that.”

Unlike the Russian military mission, which was invited by the Syrian government in 2015, the US presence in Syria is not sanctioned under international law. Both the Obama and the Trump administrations have argued that the US-led coalition against Islamic State (IS, formerly ISIS/ISIL) in Iraq and Syria is legal under the congressional authorizations to use military force against Al-Qaeda dating back to 2001.

However, the US at one point ended up effectively allied with Al-Qaeda’s affiliate in Syria, Jabhat al-Nusra (Al-Nusra Front), President Assad told RT. After it became clear that Nusra was an Al-Qaeda offshoot rather than “moderate rebels,” the US established the SDF, Assad said.

After each Syrian military victory or successful reconciliation effort, the US and its partners attempted to counteract these gains by “supporting more terrorism, bringing more terrorists to Syria, or by hindering the political process,” Assad said, blaming the US for prolonging the seven-year war.

Damascus is willing to negotiate with the SDF, as it regards the Kurdish-led militias as fellow Syrians who love their country. “We all don’t trust the Americans, [so] the one option is to live with each other as Syrians,” Assad said.

Every attempt would be made to negotiate with the SDF, he told RT, but if negotiations fail, “the Syrian army will be forced to liberate areas occupied by the SDF, with the Americans or without the Americans.”

While US President Donald Trump has floated the idea of withdrawing American troops from Syria, multiple officials from the Pentagon and the State Department have said the US troops are going nowhere, and that territories liberated from IS by SDF will not be returned to the Syrian government unless Assad leaves power.

The Syrian president, however, believes he will outlast the Americans.

“This is our land, it’s our right, it’s our duty to liberate [these areas], and the Americans should leave,” Assad told RT. “Somehow, they’re going to leave. They came to Iraq with no legal basis. And look what happened to them. They have to learn their lesson.”

The Pentagon has, as indicated above, declared that they will respond with military force to any attempt by the democratically elected Syrian government to liberate their own territory. Over 2,000 American boots are illegally on the ground in Syria and they intend to stay there until a change of regime can be secured in Syria.