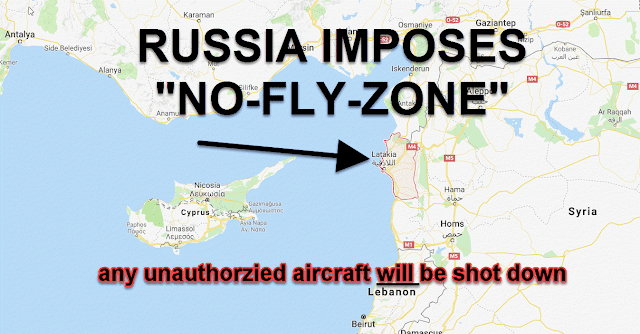 The Russian military has established a no-fly zone over the Latakia province of western Syria, Russian Senator and former Air Force commander Viktor Bondarev stated on Monday.
“The establishment of a no-fly zone over the Russian military base in Latakia will prevent a repeat of the IL-20 aircraft tragedy,” Bondarev told the Russian Federation’s Council this evening.
“After creating a no-fly zone in Latakia, it is necessary to announce that any unauthorized objects in the sky over Hmeimim Airport will definitely be eliminated,” he added.
The Russian senator added that the S-300 will not only be deployed at the Hmeimim Airbase, but also, in several parts of the country.
Earlier this evening, Russian President Vladimir Putin and Israeli Prime Minister Benjamin Netanyahu spoke on the phone to discuss the current situation in Syria.
Reports from Moscow indicated that Putin informed Netanyahu that Russia does not accept Israel’s version of the events that took place on the night of the September 17th.
Russia expects its relations with Israel to remain the same, despite the upcoming delivery of the S-300 air defense system to Syria.

"Russia will jam satellite navigation, on-board radars and communication systems of combat aircraft, which attack targets in the Syrian territory, in the regions over the waters of the Mediterranean Sea bordering with Syria," said Russian Defense Minister Sergei Shoigu.

He proceeded to say that Moscow had halted the delivery of S-300s to Damascus back in 2013 at Israel's request, but the situation around the delivery has changed "through no fault of Russia."

The shoot-down of a Russian IL-20 electronic intelligence plane last week resulted in an immediate "live-fire drill" by Russian Naval Forces in the eastern Mediterranean Sea. In view of those drills, all military aircraft from . . . . Israel . . . . were denied the ability to fly at any altitude below 19,000 feet.

NOW, those live-fire drills will be ending on September 26 and we have the Russian defense Minister saying they are keeping the air space above Syrian Territorial waters closed to all air traffic, AND will now be JAMMING military communications in that same area.

Israel is reportedly going out of its mind that they can no longer attack targets inside Syria with impunity. Word in the Intelligence Community is that the Israelis view Russia as interfering with their defense, and the interference may require Israel to launch a FIRST STRIKE upon Russian forces in Syria to neutralize them and take out the rest of Syria.

As reported on Saturday, September 22, Russia has responded to this Intel by moving TACTICAL NUCLEAR WARHEADS for their Kalibr Missiles, into Syria. Those warheads arrived Sunday afternoon. This information was contained in an UPDATE to a story, HERE.

Things are going "wild weasel" in the Middle East. The world is literally on a precipice overlooking an abyss. 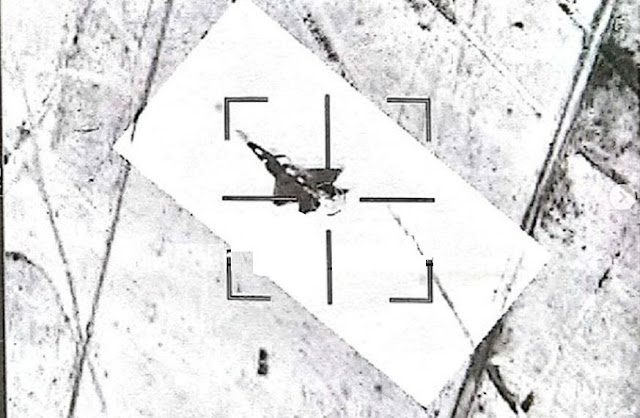 Photographs, made by the infrared search and track fire control system of the Russian Su-35S, shows in infrared spectrum, an F-22 Raptor fighter jet flying over Syria. 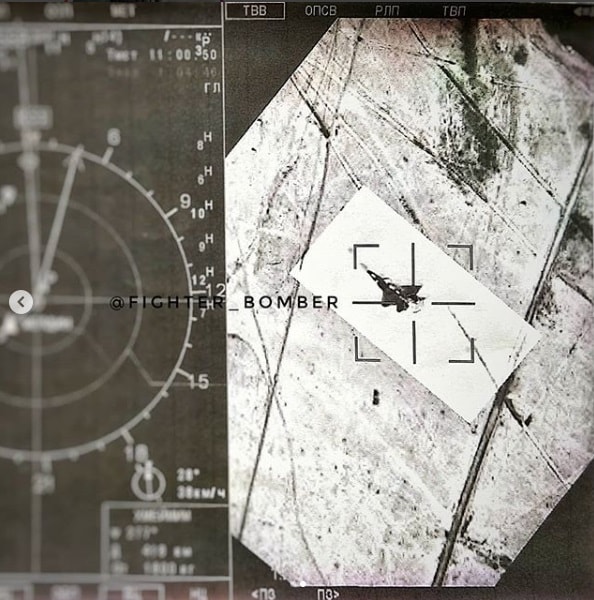 The Su-35S infrared search and track system called the OLS-35 and includes an infrared sensor, laser rangefinder, target designator and television camera. This system to determine the general position of aircraft within a fifty-kilometer radius—potentially quite useful for detecting stealth aircraft, such as F-22, at shorter ranges.
The systems scans the airspace ahead of the jet for heat signatures caused by aircraft engines and/or plane’s surface friction caused by the aircraft flying through the air.
According to the Deagel.com, OLS-35 comprises a heat-seeker, a laser rangefinder/designator with new algorithms and advanced software to outperform its predecessor installed on the Su-27/Su-30 aircraft family. The Su-35 IRST is superior to the OEPS-27 in terms of range, precision and reliability.
But, the Su-35’s infrared search and track system (IRST) does not represent a panacea solution against stealth aircraft.

The OLS-35, like and other IRST, does not provide target quality track data for weapons employment. For example, if a Russian Su-35 fighter jet detected an approaching forward aspect F-22, the Russian pilot could not directly utilize the IRST data to direct semi-active, active, or passive homing missiles; laser illumination capabilities are generally a means to guide air-to-ground munitions rather than air-to-air missiles. 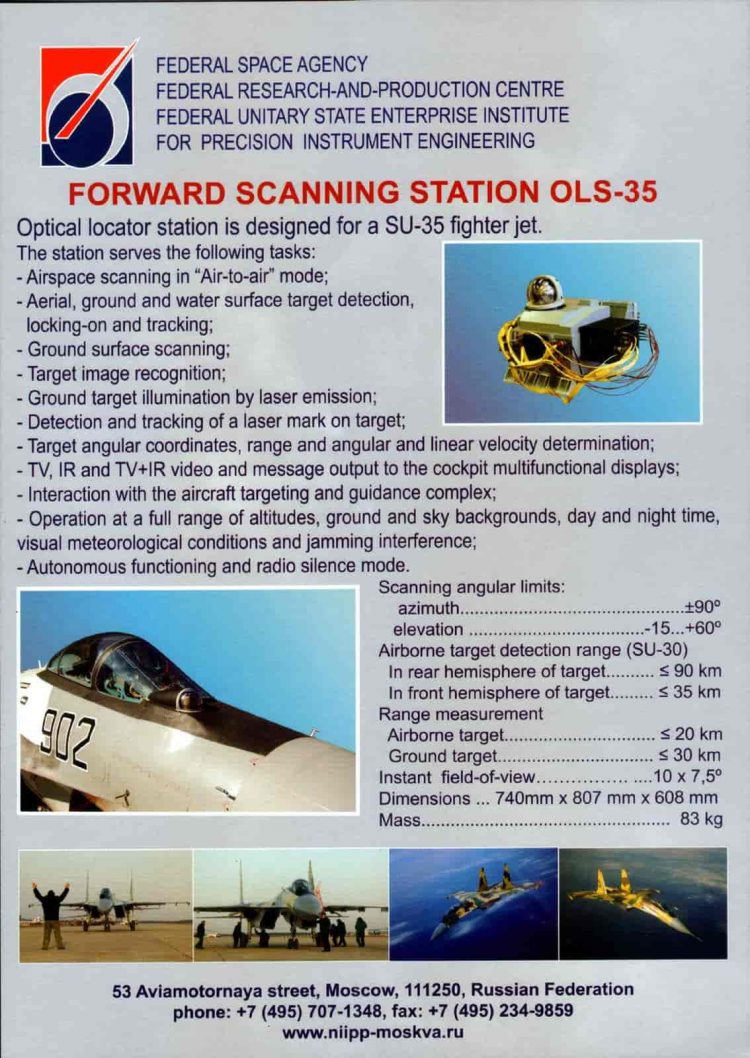 The Russian Su-35S is a Fifth Generation Fighter jet shown in a file photo below: 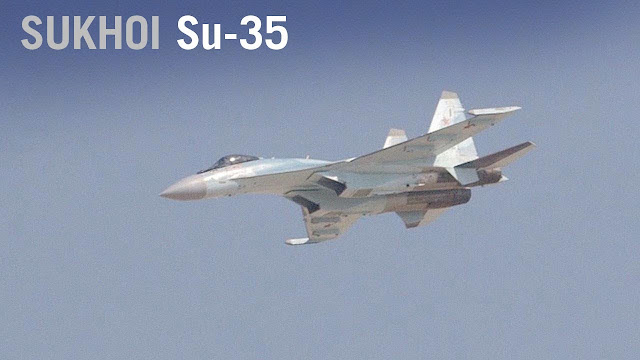 The well-known military analysis site Defence-Blog reported on Monday that a Russian Su-35S fighter jet intercepted a U.S. F-22 Raptor combat aircraft over Syria recently. If confirmed it would be hugely significant given the fact that the F-22 is the Pentagon's most advanced stealth fighter.

The report originated through a retired Russian pilot's Instagram account and was subsequently analyzed by Defence Blog; however the Pentagon is denying the accuracy the claim. The Russian pilot reportedly flies an Su-35, considered Russia's top jet fighter, and the pilot posted pictures claiming to show a US F-22 Raptor stealth jet flying above Syria, with the Russian pilot in firing position.


The Su-35 pilot claims to have locked on to the F-22 during the intercept and has posted the photos as proof, but neither Russia nor the US has acknowledged the event.