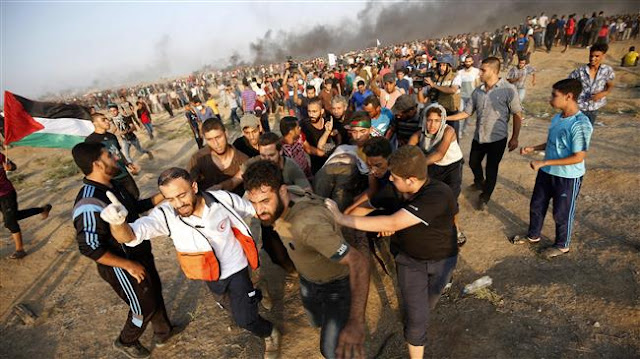 
At least five Palestinians have lost their lives and nearly three hundred more sustained injuries when Israeli military forces opened fire on a group of protesters participating in anti-occupation rallies along the border between the besieged Gaza Strip and Israeli-occupied territories.

In breaking news, so far 5 Palestinians were murdered today, with an additional 78 being shot with live rounds, and all together more than 300 sustained related injuries, as a result of Israeli security forces opening machine-gun fire upon a protesting crowd. In this extraordinarily gruesome and brutal scene that unfolded today, we have seen something which unfortunately has become all too common, as the Zionist settler-colonial Jewish supremacist entity, calling itself ‘Israel’, continues to defy international law, standards of civility, and numerous and standing UN resolutions which call for an end to its bloodthirsty repression and never-ending land-grabs of indigenous Arab lands.

The Gaza Ministry of Health said in a statement that 14-year-old Mohammed Nayef al-Houm was fatally shot in the chest during “The Great March of Return” protests east of Bureij refugee camp on Friday evening.

FRN regretfully reports that according to the Gaza Ministry of Health, among the 5 murdered was a 14 year old boy named Mohammed Nayef al-Houm, who was fatally shot in the chest during a protest east of the Bureij refugee camp earlier this evening, called ”The Great March of Return”. Palestinians have not given up their right of return, an individual and property right, which no government, whether ‘representative’ or not, can legally give away in the name of a whole people. To wit, the Zionist settlers of Ashkenazi, Russian and Polish origin, humiliate sanity and reason with their mirrored claim, that they are the ones with a ‘right of return’ to lands in the distant Levant, which the Israel government cannot remove from them.

Sadly, an additional pair of youths were among the 5 confirmed murdered – 18 year old Iyad Khalil Amed al-Shaer as well as Mohammed Bassam Shakhseh, aged, 24. They were murdered in Gaza City. At the time of this report, the identities of the remaining two confirmed as murdered by Israeli forces were unknown to FRN at the time of publishing.

Among the 300 odd injured were twenty-two children, as well as three medics and also three journalists.

A minor and a young man were taken to hospital in critical condition. Both had suffered Israeli-inflicted gunshot wounds in the chest.

Since protest rallies against the occupation began again in the Gaza Strip at the end of March, close to 200 Palestinians have been murdered or summarily executed in the streets, with over 20,000 Palestinians sustaining injuries.