Sea ice differs between the Arctic and Antarctic, primarily because of their different geography. The Arctic is a semi-enclosed ocean, almost completely surrounded by land. As a result, the sea ice that forms in the Arctic is not as mobile as sea ice in the Antarctic. Although sea ice moves around the Arctic basin, it tends to stay in the cold Arctic waters. Floes are more prone to converge, or bump into each other, and pile up into thick ridges. These converging floes makes Arctic ice thicker. The presence of ridge ice and its longer life cycle leads to ice that stays frozen longer during the summer melt. So some Arctic sea ice remains through the summer and continues to grow the following autumn. Of the 15 million square kilometers (5.8 million square miles) of sea ice that exist during winter, on average, 7 million square kilometers (2.7 million square miles) remain at the end of the summer melt season. 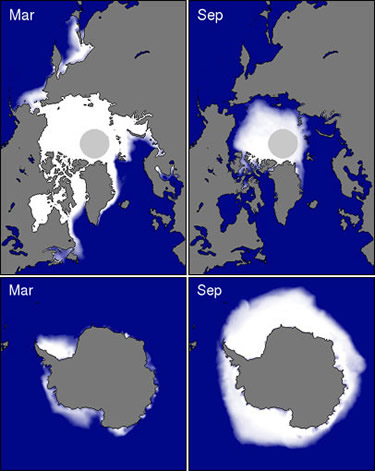 These images using satellite-derived sea ice concentration data show average minimum and maximum sea ice during March and September for the Arctic and Antarctic from 1979 to 2000. Seasons are opposite between the Southern and Northern Hemispheres; the South reaches its summer minimum in February, while the North reaches its summer minimum in September. (March is shown for both hemispheres for consistency.) The black circles in the center of the Northern Hemisphere images are areas lacking data due to limitations in satellite coverage at the North Pole.
—Credit: National Snow and Ice Data Center, University of Colorado, Boulder, Colorado.
The Antarctic is almost a geographic opposite of the Arctic, because Antarctica is a land mass surrounded by an ocean. The open ocean allows the forming sea ice to move more freely, resulting in higher drift speeds. However, Antarctic sea ice forms ridges much less often than sea ice in the Arctic. Also, because there is no land boundary to the north, the sea ice is free to float northward into warmer waters where it eventually melts. As a result, almost all of the sea ice that forms during the Antarctic winter melts during the summer. During the winter, up to 18 million square kilometers (6.9 million square miles) of ocean is covered by sea ice, but by the end of summer, only about 3 million square kilometers (1.1 million square miles) of sea ice remain.

Because sea ice does not stay in the Antarctic as long as it does in the Arctic, it does not have the opportunity to grow as thick as sea ice in the Arctic. While thickness varies significantly within both regions, Antarctic ice is typically 1 to 2 meters (3 to 6 feet) thick, while most of the Arctic is covered by sea ice 2 to 3 meters (6 to 9 feet) thick. Some Arctic regions are covered with ice that is 4 to 5 meters (12 to 15 feet) thick.

The above images reveal another notable difference in sea ice. The pattern of Antarctic maximum sea ice is roughly symmetric around the pole, forming a circle around Antarctica. In contrast, the Arctic is asymmetric, with much more ice in some longitudes than others. For example, sea ice off the eastern coast of Canada extends south of Newfoundland to 50 degrees north latitude, and ice off the eastern coast of Russian extends to Bohai Bay, China, at about 38 degrees north latitude. Conversely, in western Europe, the northern coast of Norway at 70 degrees north latitude (2,000 kilometers, or 1,243 miles, farther north than Newfoundland or Japan) generally remains ice-free. Ocean currents and winds explain these differences.
In the Antarctic, the currents and winds tend to flow without interruption around the continent in a west-to-east direction, acting like a barricade to warmer air and water to the north. In contrast, the Arctic region north of the Atlantic Ocean is open to the warmer waters from the south, because of the way the ocean currents flow. These warmer waters can flow into the Arctic and prevent sea ice from forming in the North Atlantic. The waters off the eastern coasts of Canada and Russia are affected by cold air moving off the land from the west. The eastern Canadian coast is also fed by southward-flowing cold water currents that make it easier for sea ice to grow.

Because the Arctic Ocean is mostly covered by ice and surrounded by land, precipitation is relatively rare. Snowfall tends to be low, except near the ice edge. Antarctica, however, is entirely surrounded by ocean, so moisture is more readily available. Antarctic sea ice tends to be covered by thicker snow, which may accumulate to the point that the weight of snow pushes the ice below sea level, causing the snow to become flooded by salty ocean waters.

Antarctic sea ice does not reach the South Pole, extending only to about 75 degrees south latitude (in the Ross and Weddell Seas), because of the Antarctic continent. However, Arctic sea ice can extend all the way to the North Pole. Here, the Arctic sea ice receives less solar energy at the surface because the sun's rays strike at a more oblique angle, compared to lower latitudes.
Water from the Pacific Ocean and several rivers in Russia and Canada provide fresher, less dense water to the Arctic Ocean. So the Arctic Ocean has a layer of cold, fresh water near the surface with warmer, saltier water below. This cold, fresh water layer typically allows more ice growth in the Arctic than the Antarctic.

Both Arctic and Antarctic sea ice extent are characterized by fairly large variations from year to year. The monthly average extent can vary by as much as 1 million square kilometers (386,102 square miles) from the year-to-year monthly average. In some months, the trends in Antarctic ice extent are statistically significant at the 95% level, although small.
According to scientific measurements, both the thickness and extent of summer sea ice in the Arctic have shown a dramatic decline over the past thirty years. This is consisistent with observations of a warming Arctic. This trend is a major sign of climate change in the polar regions and may be an indicator of the effects of global warming. (See Trends in the Environment section).
For more information on current sea ice conditions see the Arctic Sea Ice News & Analysis Web page. To read NSIDC press releases on recent Arctic sea ice minima, see the Arctic Sea Ice Press Announcements Archive on the Arctic Sea Ice News & Analysis Web page.
Posted by seemorerocks at 13:55