Earthquakes and threats of volcanic eruptions in Pacific basin 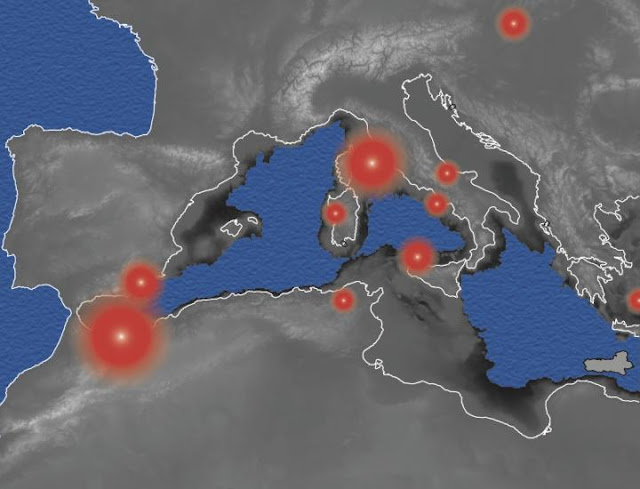 In addition to providing further evidence of the drying out of the Mediterranean, the research also demonstrates the impact of climate change on the deep Earth. Climate change influences magmatic production, in particular via the effects on erosion and hydrology, which modify the pressure exerted at the Earth's surface on the deep layers. Although we have been aware of the impact of volcanism on the climate for quite some time, the results presented in the study have disclosed that the opposite is also possible. "This pioneering work opens up new perspectives for interdisciplinary studies about the coupling between the solid Earth and the fluid Earth, and — for example — involving volcanologists, geomorphologists and climatologists," concludes Sternai.

57,000 evacuated from from Bali volcano
More than 57,000 people have been evacuated from around Mount Agung in Bali because of the risk of a volcanic eruption. 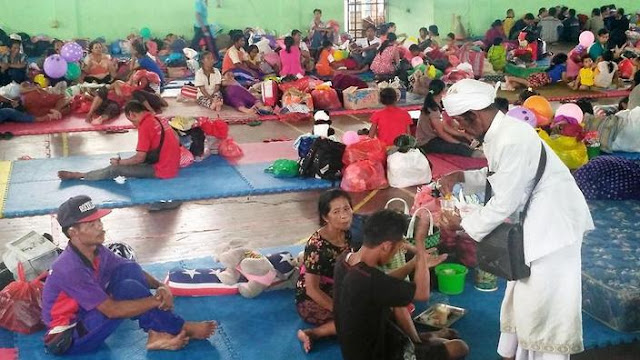 More than 57,000 people have fled the surrounds of Mount Agung volcano on the Indonesian tourist island of Bali, fearing an imminent eruption.

An increasing frequency of tremors from the volcano indicates magma is continuing to move toward the surface and an eruption is possible, said National Disaster Mitigation agency spokesman Sutopo Purwo Nugroho. He said more than 560 volcanic earthquakes were recorded on Monday, most of them shallow.

The alert status of Agung was raised to the highest level on Friday following a dramatic increase in seismic activity. It last erupted in 1963, killing about 1,100 people.

Another disaster agency official, Waskita Sutadewa in Bali, said people have scattered to all corners of the island and some have crossed to the neighbouring island of Lombok.

The evacuees are living in temporary shelters, sports centres, village halls and with relatives or friends. Some return to the danger zone, which extends up to 12 kilometres from the crater, during the day to tend to livestock.

Officials have said there's no immediate threat to tourists, but some are already cutting short their stays in Bali. A significant eruption would force the closure of Bali's international airport, stranding thousands.

"It's obviously an awful thing. We want to get out of here just to be safe," said an Australian woman at Bali's airport who identified herself as Miriam.

Nugroho said hundreds of thousands of face masks will be distributed in Bali as part of government humanitarian assistance that includes thousands of mattresses and blankets.

"The chances of an eruption are very high, but we cannot be sure when it will erupt," he said at a news conference in the capital, Jakarta.

He said not everyone had left the danger zone because they didn't want to leave livestock, were underestimating the risk or because of religious reasons.

"Officers continue to sweep the area and are appealing for people to evacuate," he said.

The mountain, 72 kilometres to the northeast of the tourist hotspot of Kuta, is among more than 120 active volcanoes in Indonesia.

The Pacific Tsunami Warning Centre says there is no threat of a tsunami from a 6.4 earthquake which struck near Fiji and Tonga.

The US Geological Survery measured the quake, which occurred today at 1619 Fiji Time, at a depth of 98 kilometres.

According to disaster response authorities in Fiji, the quake's epicentre was 846km south east of Suva, which is just to the west of the Tongan trench.
The co-ordinates of the quake are 23.713°S 176.937°W. 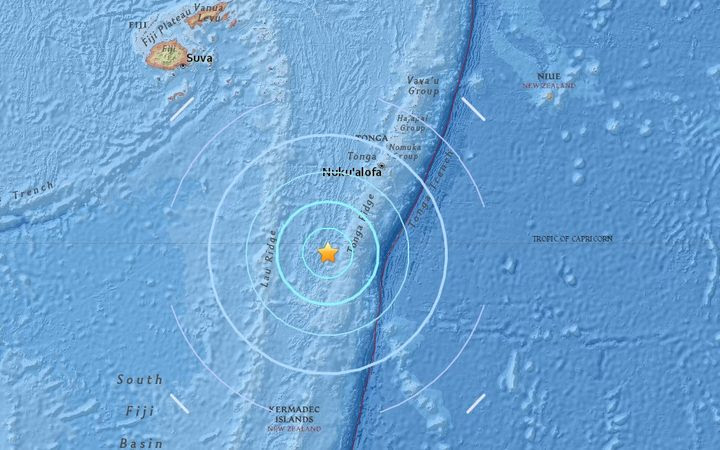 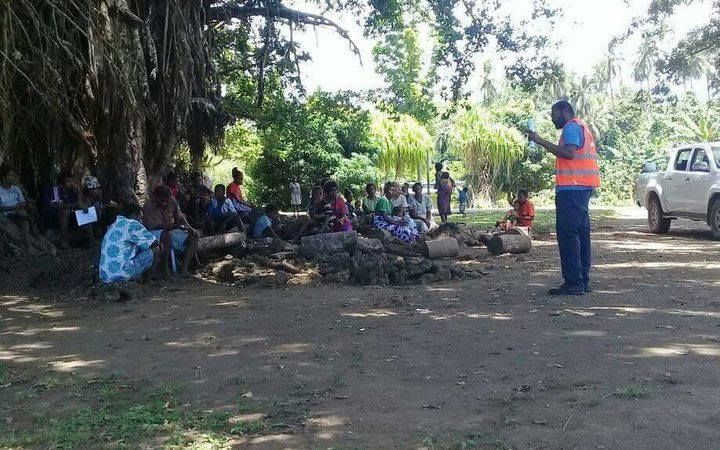 There is growing fear among evacuees on the Vanuatu island of Ambae with shelter starting to run out as thousands more flee the erupting Manaro Voui volcano. 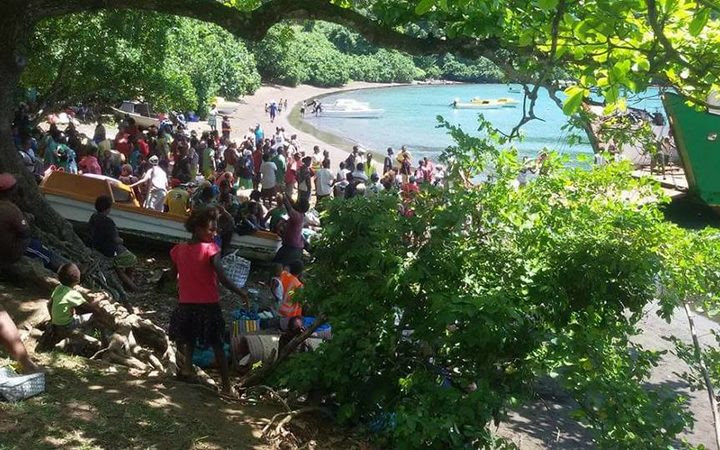 People on Ambae waiting to be evacuated to the other side of the island. Photo: Yumi Toktok

Around half of the island's population of 10,000 have already been evacuated from the danger zone around the volcano.

But residents say ash fall was affecting more communities and people are being scared by the booming of the volcanic eruptions which they say are louder than they have heard before.

The chairman of Ambae's disaster committee, Manuel Amu, said the ongoing volcanic eruption event is worse than the last one in 2005.

Mr Amu said they are in desperate need of temporary shelters as two to three thousand more people are expected to arrive at evacuation centres set up on the western and eastern sides of the island.

He said some people have already left the island and others are considering doing the same.

"People of the nearby islands who are located here have already moved. Like Pentecost Island and Maewo," he said.

"And people are freely agree if it increase to alert (level 5) then everybody has a plan in place and everybody, most people agreed to move to the other islands."
Manuel Amu said 12 years ago it took three months before people were able to go back to their villages, and he feels this time the situation is worse.

" In 2005 the evacuation has been done onstage three. But at the moment the volcano is on stage four we just begin our evacuation and at the moment it is more serious than in 2005. And I think it would take much longer than what has happened in 2005," he said.

The Vanuatu government has allocated about $US2 million towards the evacuation.

But Manuel Amu said there was also a lot of confusion on the island as they haven't received any official confirmation that a state of emergency had been declared as reported in local media nor of the US$2 million in funding reportedly approved to help with evacuations. Evacuation centre on Ambae - people could only take what they could carry. Photo: Yumi Toktok

Businesses in both Port Vila and Luganville are donating emergency supplies including food and water to send to those evacuated.

Over recent weeks, a cinder cone filled with a pool of lava has risen out of the crater lake on the Manaro voui volcano.

It's feared if the cone is breached the mixture of water and lava could cause a powerful explosion. 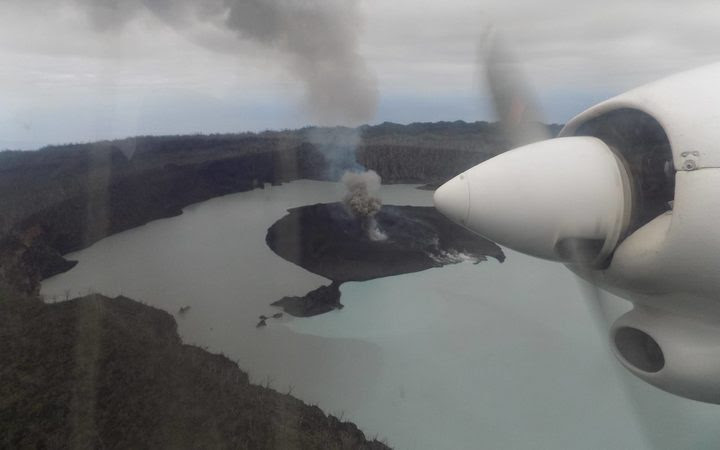 An aerial image of the smoking volcano in the centre of Ambae, Vanuatu, that's forced the evacuation of some 5,000 people. Photo: Vanuatu Disaster Management Office

The director of Vanuatu's Livestock Department, Lonny Bong, has ordered all animals from the Penama Provincial Small Livestock Breeding Centre to be evacuated to nearby Maewo Island until the eruption threat on Ambae has eaed.

The small animals include goats, pigs, ducks and chickens.

Meanwhile it was not clear at this stage what guarantee there was for properties and animals to be kept safe from vandals in the absence of their owners.

Our correspondent said the government was yet to indicate whether additional police would be sent to the villages to ensure property was safe.