Why The United States Is the Fourth Reich 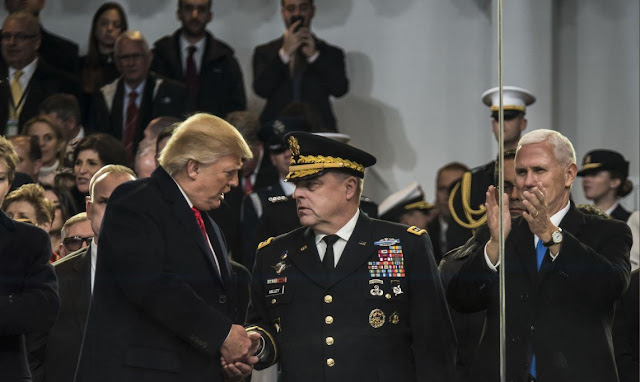 US President Trump’s declaration last week before the UN to “totally destroy” North Korea and his general ranting about American military might is on par with the Nazi Third Reich’s invocation of “Total War”.

The ease with which Trump and his senior officials talk about “military options” towards North Korea, and any other defiant nation, is arguably not just a violation of the UN Charter but also the principles of international law established at the Nuremberg Trials of Nazi leaders. Any use or threat of war that is not a clear act of self-defense is “aggression”.

The United States under President Donald J Trump is more than ever openly adopting the self-declared “right” to launch wars. Its hysterical claim of “self-defense” with regard to North Korea is a cynical excuse for aggression. When Trump says North Korea’s leader Kim Jong-un “won’t be around for much longer” the words are reasonable grounds for the North Koreans to believe the US is “declaring war” – especially in the context of repeated military threats by the Americans of using “all options on the table”.

Trump’s thuggish address to the UN General Assembly was a shocking repudiation of the world body’s official peace-building mission. Trump’s bellicosity had some commentators making comparisons with a Nazi-like oration from Nuremberg rallies circa 1938-39.

American writer Paul Craig Roberts summed up grimly by saying the US is now the Fourth Reich – meaning successor to the Nazi Third Reich.

When someone of Paul Craig Roberts’ stature makes such a grave comment, one has to listen. This is not mere hyperbole bandied about by a novice. Roberts’ establishment credentials are impeccable. He served as a senior member of the Ronald Reagan administration during the 1980s, as assistant secretary in the Treasury Department. Roberts also worked as editor of the Wall Street Journal and is an award-winning author. For such an esteemed former government insider to declare the US as the “Fourth Reich” is a measure of the Rubicon that the country has crossed.

Truth be told, however, the US has been way past the Rubicon into dark territory for a long time. To compare US state power with Nazi Germany is not merely a metaphor. There is a very real historical connection.

This year marks the 70th anniversary since the American Central Intelligence Agency (CIA) was created in 1947 in the aftermath of the Second World and the defeat of Nazi Germany. As American author Douglas Valentine recently remarked, the milestone for the CIA represents “70 years of organized crime”.

The CIA and US military leaders at the Pentagon were in many ways the inheritors of Nazi Germany. Thousands of senior Nazi military, intelligence, scientists and engineers were immediately recruited by the Pentagon and nascent CIA after the Second World War.

Operation Paperclip approved by the US Joint Chiefs of Staff in late 1945 was vital for the adoption of Nazi missile technology. SS Major Werner Von Braun and hundreds of other rocket experts were instrumental in developing American weapons, as well as the NASA space program.

Operation Sunrise overseen by Allen Dulles and other early CIA figures (the organization was known up to 1947 as the Office of Strategic Studies) set up “rat lines” for top Nazi commanders to escape justice and flee from Europe. Among senior Nazi officers aided and abetted by the American CIA were General Karl Wolff and Major General Reinhard Gehlen.

The liaison between American intelligence and military, and the remnants of the Third Reich, were formative in the organizational creation and Cold War ideology of the CIA and Pentagon towards the Soviet Union. The Americans benefited not only from Nazi gold stolen from European countries, they deployed the same intelligence and covert military techniques of the Third Reich. (See, for example, David Talbot’s book, The Devil's Chessboard, on the formation of the CIA.)

Major General Reinhard Gehlen after his postwar induction in Washington set up the Gehlen Organization with his many contacts among Ukrainian fascists to conduct sabotage operations behind Soviet lines in the decades following the Second World War.

After the Second World War, the United States’ power structure turned into a dichotomy. On the one hand, there was the formal government of elected Congress members and presidents. On the other, was the real power holders in the “secret government” comprising the CIA and the US military-industrial complex.

The “secret government” or the “deep state” of the US has been a law unto itself over the past seven decades. The election of Democrat or Republican politicians has no significant bearing on government policy. The shots are called by the CIA and the “deep state” who answer to the ruling elite of corporate power. Any president who does not comply is dealt with like John F Kennedy, assassinated in November 1963. Hence Trump’s craven capitulation since election.

Funded with Nazi war loot, Russophobia, and contempt for international law, the CIA and the American military inevitably became a killing machine.

Only five years after the Second World War, the Americans went to war in Korea, allegedly “to defeat world communism”. Much of the new military technology that the Americans deployed during the 1950-53 Korean War was developed by the Nazi engineers recruited through Operation Paperclip. The genocidal destruction inflicted on Korea by the Americans was no different from the barbarism used by the Third Reich.

Over the past seven decades, the US rulers have waged overt wars, coups, assassinations and proxy wars against dozens of countries around the world. The global death toll from this American destruction is estimated at 20 million people.

When US leaders extol “American exceptionalism” it is a euphemism for “supremacy” and the “right” to use military violence to further strategic interests. This is no different from the supremacist thinking that the Third Reich invoked to justify its conquest of others.

When Trump and his administration threaten to annihilate North Korea the mindset is not unprecedented. Almost every US leader since the Second World War has promulgated the same unilateral use of violence towards other nations deemed to be “enemy states”. What Trump represents is simply a more naked version of the same aggression.

In addition to the horrendous global death toll from US violence, it should be noted that the US currently spends about $700 billion every year on military – 10 times what Russia spends, or 10 times what the next 9 biggest military-spending nations allocate. The US has military bases in over 100 countries around the world. Over the past quarter-century, it has been in a permanent state of illegal war.

It is by no means an exaggeration to say the US is the Fourth Reich whose direct antecedent is Nazi Germany. The outgrowth of the CIA and Pentagon from Nazi personnel and illicit funds following the Second World War ensured that the US rulers imbued the ideology of the Third Reich.

The legacy of the American Fourth Reich is evident for those with open minds: wars of aggression, genocide, proxy wars, coups, death squads, mass surveillance of citizens, mass media propaganda, and mass torture – all done with impunity and self-righteousness.

Finian Cunningham has written extensively on international affairs, with articles published in several languages. He is a Master’s graduate in Agricultural Chemistry and worked as a scientific editor for the Royal Society of Chemistry, Cambridge, England, before pursuing a career in newspaper journalism. He is also a musician and songwriter. For nearly 20 years, he worked as an editor and writer in major news media organisations, including The Mirror, Irish Times and Independent.

This article was first published by Strategic Culture Foundation -
Posted by seemorerocks at 12:27