How did that get there? Plastic chunks on Arctic ice show how far pollution has spread
Discovery by UK scientists prompts fear that melting ice will allow more plastic to be released into the central Arctic Ocean – with huge effects on wildlife 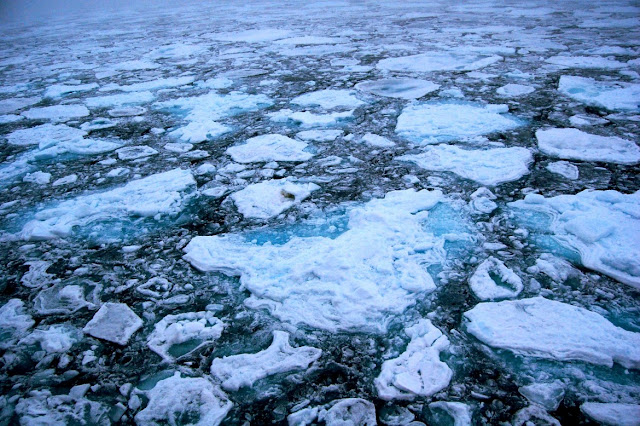 A British-led expedition has discovered sizeable chunks of polystyrene lying on remote frozen ice floes in the middle of the Arctic Ocean.

The depressing find, only 1,000 miles from the north pole, is the first made in an area that was previously inaccessible to scientists because of sea ice. It is one of the most northerly sightings of such detritus in the world’s oceans, which are increasingly polluted by plastics.

A team of scientists drawn from the UK, US, Norway and Hong Kong, headed by marine biologist Tim Gordon of Exeter University, said the discovery confirmed just how far plastic pollution has spread. It has prompted fears that plastic waste is flowing into the Arctic as the ice melts because of climate change. The thaw is simultaneously releasing plastic that has long been trapped in the ice.

The scientists, who were on the explorer Pen Hadow’s Arctic Mission attempt to sail to the north pole, were surprised to discover the blocks of polystyrene many hundreds of miles from land in areas that were, until recently, covered by ice all year round. They found two large pieces on the edge of ice floes between 77° and 80° north, in the middle of the international waters of the central Arctic Ocean.

“For the 25 years I have been exploring the Arctic I have never seen such large and very visible items of rubbish,” said Hadow, the only person to have trekked solo, without resupply, from Canada to the geographic north pole. “The blocks of polystyrene were just sitting on top of the ice.”

“Finding pieces of rubbish like this is a worrying sign that melting ice may be allowing high levels of pollution to drift into these areas,” Gordon said. “This is potentially very dangerous for the Arctic’s wildlife.”

The pioneering expedition – using two yachts – sailed further into the international waters of the Central Arctic Ocean than any previous navigation attempt without icebreakers. Rates of ice melt have increased dramatically due to climate change, with 40% of the central Arctic Ocean now navigable in summer.

Estimates suggest that there are more than 5 trillion pieces of plastic floating on the surface of the world’s oceans. It has been claimed that there is now enough plastic to form a permanent layer in the fossil record. Dr Ceri Lewis, scientific adviser to the expedition based at the University of Exeter, has previously warned that people produce around 300 million tons of plastic a year, roughly the same weight as all the humans on the planet. Around half of all plastic produced is used once and then thrown away.

A significant concern is that large plastic pieces can break down into “microplastics” – tiny particles that are accidentally consumed by filter-feeding animals. The particles remain in animals’ bodies and are passed up the food chain, threatening wildlife at all levels from zooplankton to apex predators such as polar bears. In an attempt to gauge the presence of microplastics in Arctic waters, the scientists intend to test samples of seawater they collected in nets with holes smaller than a millimetre across.

Some projections indicate that the entire Arctic Ocean will be ice-free in summer by 2050. This will allow human exploitation of the newly opened waters and bring a range of fresh threats to Arctic wildlife.

“The Arctic Ocean’s wildlife used to be protected by a layer of sea ice all year round,” Gordon said.

“Now that is melting away, this environment will be exposed to commercial fishing, shipping and industry for the first time in history. We need to seriously consider how best to protect the Arctic’s animals from these new threats. By doing so, we will give them a fighting chance of adapting and responding to their rapidly changing habitat.”

The team is also investigating the impact of human-made noise pollution on Arctic marine life and mammals, using underwater loudspeakers and microphones to understand how sound travels through the polar seas, and how this might be affected by ice loss. Arctic cod, beluga whales, ringed seals and walruses use a range of sounds to communicate in the underwater darkness. Narwhals hunt for fish a mile below the surface using biosonar, emitting 1,000 high-pitched clicks every second and listening to their reflected echoes – much the same way that bats do.

“It is critical that we establish baseline natural recordings in this newly exposed oceanic environment,” said Professor Steve Simpson, an expert in bioacoustics and noise pollution at Exeter University. “These recordings will allow us to understand how human activities are changing the soundscape of the summer Arctic, and assess the success of future noise management in this unique acoustic world.”

On-board wildlife biologist Heather Bauscher said increasing ice melt could have serious consequences for the whole Arctic ecosystem. “Quality research and the development of sound management strategies are necessary to protect the Arctic’s wildlife: this is crucial at a time of such dramatic change,” she said. 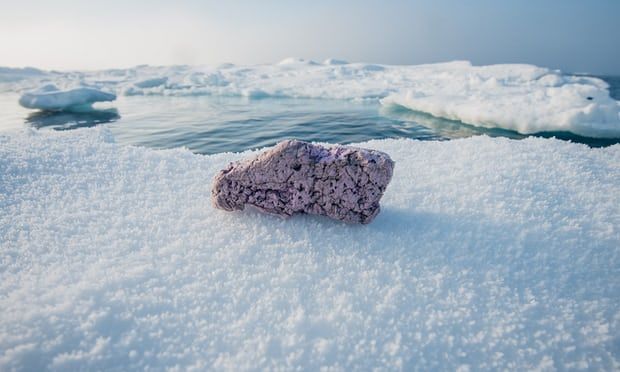 An untold amount of plastic pollution finds its way into the ocean every year. No one knows for sure what becomes of all that garbage. Much of it most likely erodes into microplastic, tiny flecks smaller than five millimeters in diameter, which can take up pollutants and are often ingested by marine animals, including fish and crustaceans.

Unexpectedly, trillions of those particles end up in Arctic sea ice, according to a paper published in May in the scientific journal Earth’s Future. The study found that sea ice contains up to 240 microplastic particles per cubic meter—as much as 2,000 times the density of the particles that are estimated to float in the Great Pacific Garbage Patch. “We know that microplastic is found in oceans worldwide, but it is surprising that it’s found in such an abundance in Arctic sea ice,” says Rachel Obbard, a materials scientist and engineer at Dartmouth College and lead researcher of the study. When ice forms at the surface of the ocean, it traps anything that happens to be floating there. The freezing process, she says, seems to be concentrating the trapped particles, which otherwise would eventually sink to the seafloor.

Obbard did not set out to examine sea ice for plastic. Instead she and a student were looking for algae in four ice cores collected from remote locations in the Arctic Ocean. When she melted and filtered the samples, however, she found blue, red, green and black bits. “These brightly colored things,” she says, “just jumped right out at me.”

Extrapolating from the samples, Obbard and her colleagues estimate that up to seven trillion pieces of microplastic in total could be released as Arctic sea ice melts because of climate change. Some researchers say summer in the Arctic may be ice-free around 2100. Others project it could happen within the next decade.

Posted by seemorerocks at 15:32