How reliable is NOAA data? 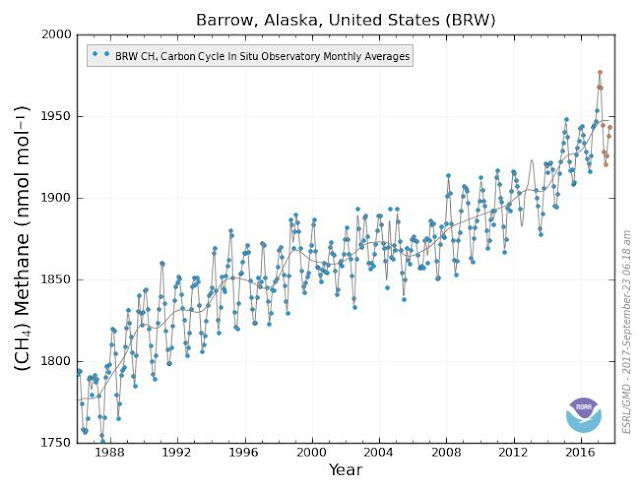 Now, contrast the satellite data with the NOAA "In Situ" Measurements, that are (for the most part) 2000 ppb or below. According to NOAA, the methane readings are so low there is nothing to worry about. The In Situ machine takes its samples from the air just a few feet above the building and paints a totally different picture. of consistently LOW methane readings below the pink that we see in the chart from the Satellite data. Hummmm, they totally disagree!

NOAA tells us to disregard the satellite data because it conflicts with their "Near the Ground" Data (for a gas that is lighter than air). You can see that data below these paragraphs.

Obviously, the two data sources totally disagree and I believe that there is malicious intent from NOAA to even post the In Situ data. Why won't they give us Flask Data from altitude?

I have totally detested NOAA since 1979 when I found out that they will lie at any time to please any corrupt official in government.

Back then, they treated me as a Naval Officer (and all the men of my ship and the flotilla of ships that were going over to the coast of Iran with us) as EXPENDABLE COMMODITIES. Do you remember the Iranian Embassy Rescue Attempt? That was what we were there for.

THAT, BY NOT BOTHERING TO UPDATE OUR DAY TO DAY OCEAN CHARTS FOR THE HOT SPOT IN THE MID PACIFIC (That includes thermal inversion layers in which enemy submarines can hide from our sonar systems.) The updates were extremely important because we were going into a potential hot war situation during the Iran Hostage Crisis.

China was selling Iran Anti Ship missiles through North Korea. There were numerous submarines from the potential belligerent countries that might attack us for being in the Indian Ocean near the Iranian coast, and our own agency, NOAA was NOT helping us one iota with valid data that was absolutely necessary for our ships' defense.

If there was a confidence level for the up to date Ocean Temperature Data to depth from NOAA, it would be near Zilch. I have as much confidence in NOAA then as I do now. It is still Zilch. They lie all of the time.

Compare the satellite data to the insane crap NOAA is putting out in the chart below AFTER they remove all the high readings. TOTAL CORRUPTION ALL OF THE TIME! {Otherwise known as "TCAT" by American Naval Officers who are experienced in Anti Submarine Warfare.}


We know that surface ships are the TARGET. We should not give the submarines additional help in their effort to kill our men on our ships.
Posted by seemorerocks at 12:53