Reports out of Puerto Rico - evening 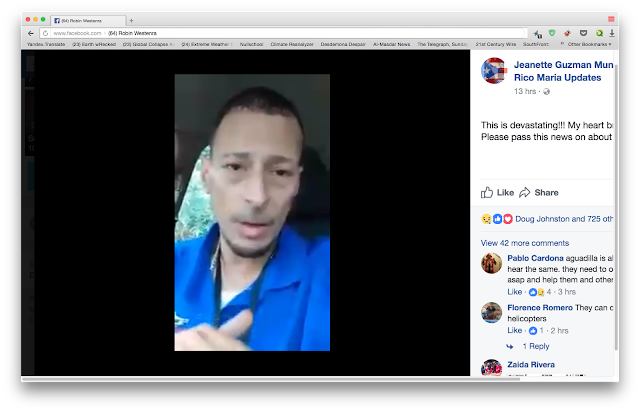 This is devastating!!! My heart breaks for everyone ! Please pass this news on about Aquidillo !


Hospitals in Puerto Rico without power, running out of food, fuel & water

Someone has posed the obvious question.

After hundreds of years under the brutal yoke of the Spanish, Puerto Rico wanted its independence.

The US said “no” and backed that “no” up with the barrel of a gun.

So, like it or not, Puerto Ricans became US citizens. (US citizens without Congressional representation.)

100 years and billions of dollars of corporate looting later, Puerto Rico has been hit by a truly catastrophic storm that has destroyed its electric grid disrupting water and food supplies, not to mention medical and other essential services.

As of this writing, many rural town have still not been heard from. The situation is dire.

The problem: Unlike Texas, Florida or even Louisiana, Puerto Rico is an island and the whole island was hit. Immediate help from neighbors is not possible.

You can’t just load up a pick up truck and drive there with supplies. Or help drive people out. 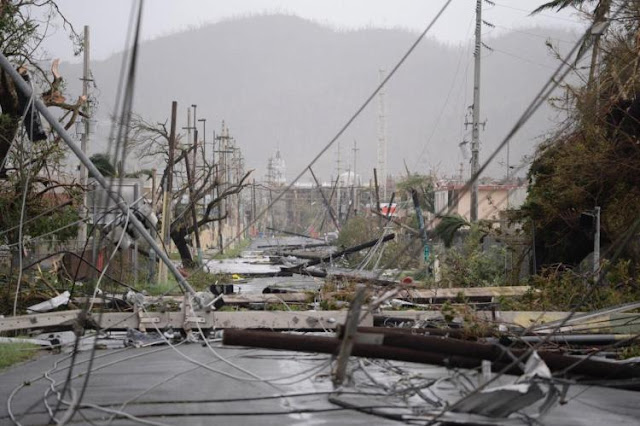 PUERTO RICO, FACING absolute devastation after Hurricane Maria barreled through last week, desperately needs immediate funding to restore critical infrastructure, particularly its hobbled electric grid. The entire island — home to over 3.5 million American citizens, roughly equivalent to the state of Connecticut — lost power, and satellite imagery shows how little electricity has come back. This affects not only electricity and telecommunications service but access to clean water, as many pumping stations run on the same grid.

A group of bondholders, who own a portion of Puerto Rico’s massive $72 billion debt, has proposed what they are calling relief — but in the form of a loan. So they’re offering a territory mired in debt the chance to take on more debt.

The announcement came after The Intercept spent two days reaching out to 51 of Puerto Rico’s known creditors, asking them if they would support a moratorium or cancellation of debt payments for the island, given the humanitarian crisis. Prior to this announcement, only three of the 51 creditors had so much as donated relief funds to charity or offered sympathy for island residents, all of them banks who actually have to face consumers, and so are a bit more adept at handling public relations. No creditor had supported debt relief.


Of the 51 creditors contacted by The Intercept, only Citibank, Goldman Sachs, and Scotiabank have pledged no-strings-attached money for Puerto Rico and other Caribbean islands, in the form of donations to relief organizations totaling $1.25 million. Citi has also waived certain fees for citizens within disaster zones.

The Trump administration is restricting lawmakers from traveling to hurricane-hit Puerto Rico and the U.S. Virgin Islands in military aircraft to help prioritize recovery efforts, according to a report in The Washington Post.


A congressional aide told the paper the administration made clear they needed “resources for rescue and recovery, thus member travel will be restricted.”


The White House and Pentagon began denying permission to use military aircraft on Monday night after several lawmakers made plans to visit the islands.


Hurricane Maria battered Puerto Rico and the U.S. Virgin Islands, including the islands' ports, making it difficult to bring aid to residents. It was the second major storm to hit Puerto Rico in weeks, following Hurricane Irma.


Resident Puerto Rico Commissioner Jenniffer González-Colón was the only lawmaker on the island during the hurricane. She praised the close coordination between the federal government and island authorities.


"We had never seen this sort of communication between federal agencies and the agencies of Puerto Rico," González-Colón told The Hill Tuesday.


"[Air traffic] communications aren't operating at their maximum capacity, you still have five ports that haven't opened, so the level of devastation is dramatic," she said.


President Trump has announced he will visit Puerto Rico on Tuesday to meet with officials and survey storm damage.


But the administration is facing criticism from some who say it needs to do more to ramp up assistance.


Federal Emergency Management Agency Administrator Brock Long is among the U.S. officials on the ground in Puerto Rico.


He defended the administration's response at a press conference Tuesday and noted that the island presents unique challenges. Only one airport in San Juan is currently operational.