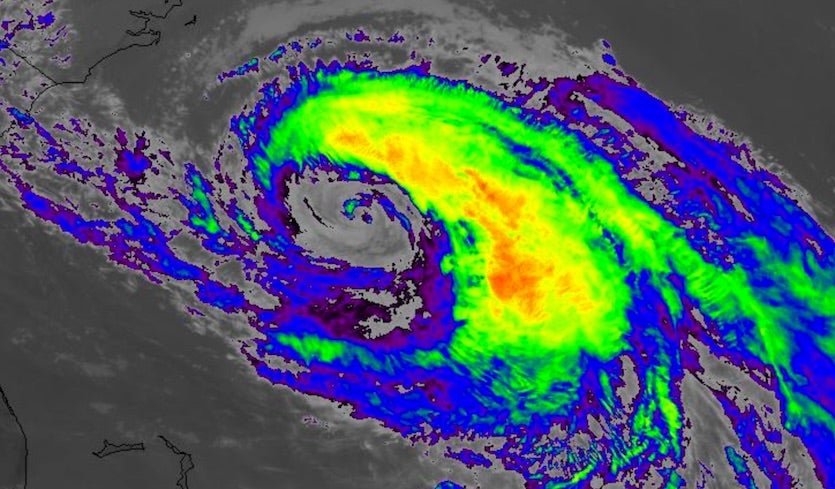 A Tropical Storm Warning and Storm Surge Watch were up for much of North Carolina’s Outer Banks on Monday as a weakening Hurricane Maria headed north at 7 mph. A mandatory evacuation was ordered for all visitors to Ocracoke Island and Hatteras Island.

Satellite imagery on Monday showed that Maria’s inner core had collapsed, and the heaviest thunderstorm activity was on the east side of the storm, away from where strong upper-level winds from the west were shearing it. Maria’s weakening was primarily due to the storm’s passage over the cool waters churned up by Hurricane Jose last week. The Hurricane Hunters measured ocean temperatures of 24 - 26°C (75 - 79°F) near Maria’s center on Sunday night, and these cool waters, combined with moderate wind shear of 15 knots, caused the hurricane’s eyewall to collapse and the storm’s peak winds to fall to Category 1 strength, 80 mph. Further weakening is likely, and Maria is expected to be a strong tropical storm or low-end Category 1 hurricane on Wednesday, when it makes its closest approach to North Carolina.

Maria will continue to move across a region with cool sea surface temperatures due to the passage of Hurricane Jose, and will continue to experience moderate wind shear. Our top intensity models predict that a slow weakening of Maria will result, with the storm being a tropical storm or low-end Categroy 1 hurricane with 60 - 75 mph winds by Wednesdaymorning, when Maria is expected to make its closest approach to North Carolina.

The model forecasts for Maria have not changed much over the past day, with all of our top models predicting that the hurricane will make its closest approach to North Carolina on Wednesday, when it will come within about 150 – 200 miles east of the Outer Banks. The 0Z Monday runs of the GFS model and European model had fewer than 10% of their ensemble members showing a landfall in North Carolina, and it is getting close to the time that we can dismiss the possibility that Maria will make landfall there. By Thursday, a trough of low pressure passing to the north of Maria will pull the storm rapidly east-northeastward out to sea.

Tropical storm-force winds extended about 185 miles to the northwest of Maria’s center on Monday, and are predicted to maintain that radius of coverage through Wednesday. Thus, it is likely that the Outer Banks of North Carolina will experience sustained winds near 35 - 40 mph on Wednesday, and about 1 – 2” of rain. The counter-clockwise circulation of Maria, combined with its slow motion, will be capable of driving a storm surge of 2 – 4’ to the coast about 50 miles on either side of Cape Hatteras, North Carolina. This may flood the only road into or out of the Outer Banks, NC 12, and the potential severing of this lifeline to the islands necessitated the evacuation order for Okracoke Island and visitors to the Outer Banks. Last week, waves and storm surge from Hurricane Jose washed over the road and damaged the dunes protecting it.

The U.S. territory of Puerto Rico continues to grapple with destruction, dislocation, and suffering in the aftermath of Hurricane Maria, with the power grid still decimated and water and cellphone service both scarce. “The devastation in Puerto Rico has set us back nearly 20 to 30 years,” said Puerto Rico’s nonvoting representative in Congress, Jenniffer Gonzalez. The damage assessment extends to the world of meteorology, as new photos on Sunday revealed. Both the radar dish and the surrounding radome were scoured clean from the pedestal of the National Weather Service’s TJUA radar. Winds of 145 mph were measured before the radar went down, according to weather.com’s Jonathan Belles.

Alex Lamers‏Verified account @AlexJLamers
What a NWS radar normally looks like from the exterior, versus @NWSSanJuan radar now after Hurricane #Maria. 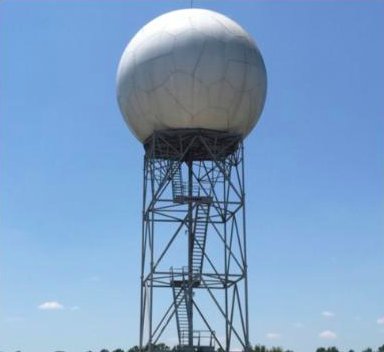 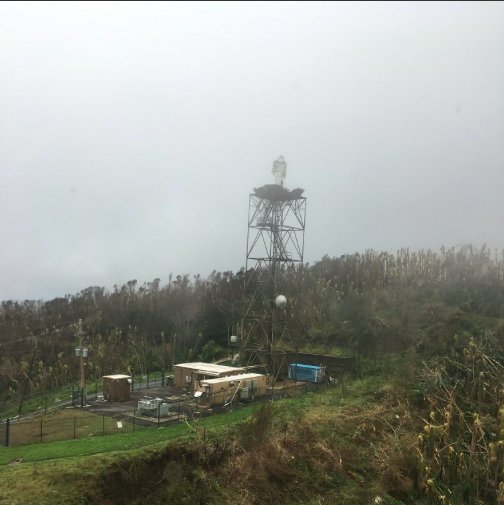 Lonesome Lee could become a bit stronger this week

Far out in the central North Atlantic, almost 900 miles east of Bermuda, Hurricane Lee isn’t bothering any land areas, though it’s steadily adding to this season’s already-hefty pileup of accumulated cyclone energy (ACE). Let’s keep in mind that if the definition of ACE took into account storm size as well as peak winds, Lee wouldn’t be contributing much. Its tropical-storm-force winds extended no more than 35 miles from its center as of Monday morning, and hurricane-force winds extended out a mere 10 miles. However, Lee’s top winds were holding near 90 mph at 11 am Monday, which kept it a high-end Category 1 storm. As is typical of small, higher-latitude hurricanes, Lee has a distinct eye embedded in lower-topped showers and thunderstorms, a result of its relatively cool atmospheric environment.

Lee remains in a supportive regime for growth, and its tiny size will allow for potentially rapid, hard-to-predict shifts in strength. Vertical wind shear will remain on the light to moderate side—around 10 knots—through Wednesday, as Lee drifts mainly westward over SSTs of 27-28°C (81-82°F), close to 1°C above average. The main impediments to Lee’s strength through midweek are its poky motion, which is allowing cooler water to be churned up, and intrusions of dry air (mid-level relative humidity this week will be around 40 – 50% in Lee’s environment). If Lee can overcome these threats, it could surge to Category 2 strength in short order. The 06Z Monday run of our top intensity model, HWRF, has Lee peaking as a low-end Cat 2. Later in the week, wind shear will increase, and Lee is expected to accelerate northeast over cooler water.

Is this fall at all? Heat records dropping faster than leaves in the Midwest and Northeast

Large swaths of the U.S. Midwest and Northeast, along with southeast Canada, continued to bake on Monday in some of the region’s highest temperatures ever recorded after the autumnal equinox. The heat is a product of the same sprawling zone of upper-level high pressure that’s slowed the northward treks of Hurricanes Jose and Maria. Meanwhile, it’s been quite chilly across the western U.S., but continent-wide, there have been far more heat records than cold records. One reason: a cloudy, chilly air mass can easily keep daytime highs 20°F or more below average in the arid West, but it’s more difficult to push early-autumn temperatures 20°F or more above average in the more temperate East. Moreover, the clouds and moisture out West have tended to keep nighttime temperatures from plummeting, whereas rich atmospheric moisture has kept nighttime lows back East close to summertime levels.

In Canada’s largest city—Toronto, Ontario, where weather records go all the way back to 1840—Sunday was the hottest day ever notched after the autumnal equinox, with a sweltering high of 33.6°C (92.5°F). This compares to an average high for the date of 19.0°C (66.2°F). Sunday was also Toronto’s hottest day of the entire year (so far).

The chilly pattern in the West produced only a few scattered record lows, but there was an impressive three-day cluster of record-cold highs around Utah’s Wasatch Range. Provo, UT (Brigham Young University) had a daytime high of just 42°F on Sunday, which was its coldest day ever notched during September in records going back to 1916. Spanish Fork, UT, also set a monthly record for coldest daily maximum, with 43°F (records begin in 1909).

Alta, UT, got a head start on ski weather, with 3.4” of snow on Friday, 3” on Saturday, and 11” on Sunday along with daily highs of 34°F, 35°F, and 31°F on Friday, Saturday, and Sunday. Sunday was the earliest day in autumn that Alta has remained below freezing in records going back to 1906. 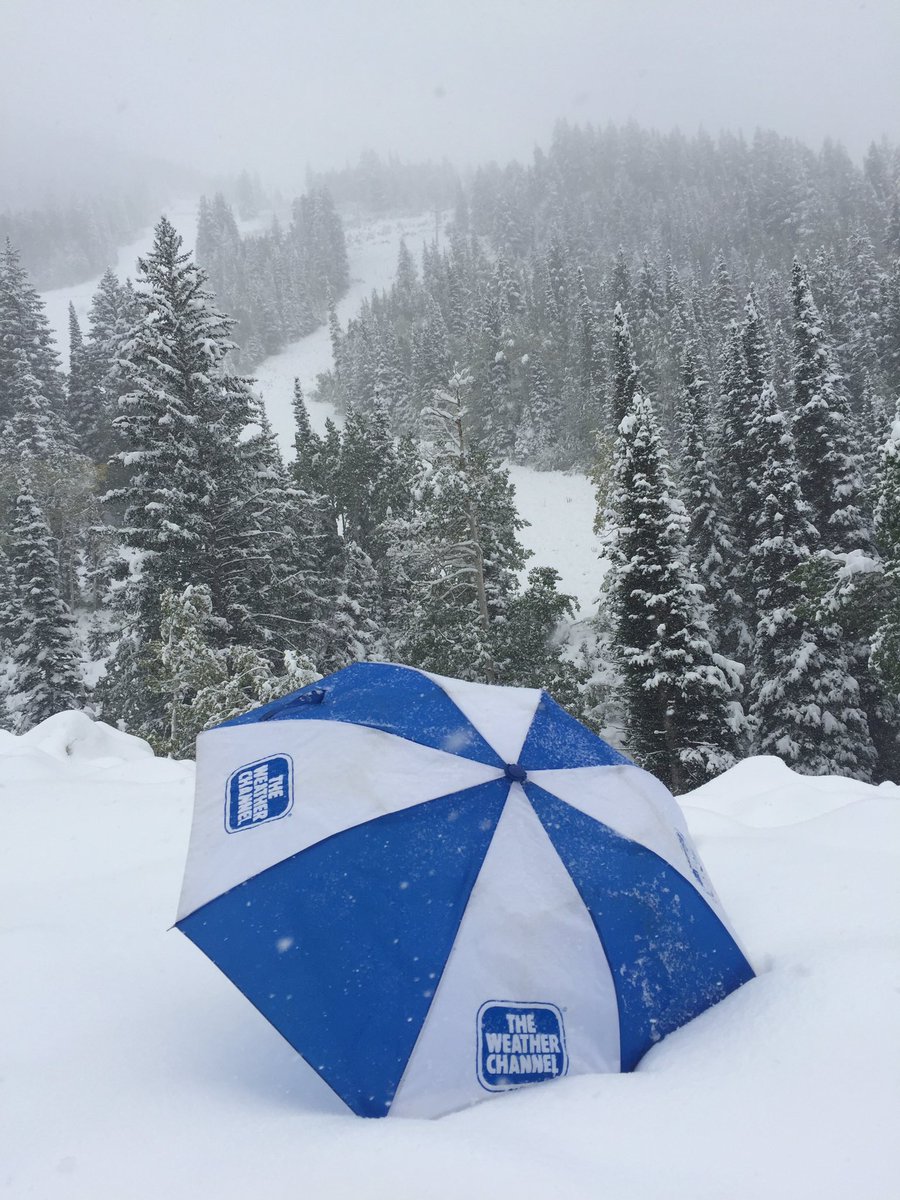