Report on climate change-induced extreme weather around the globe 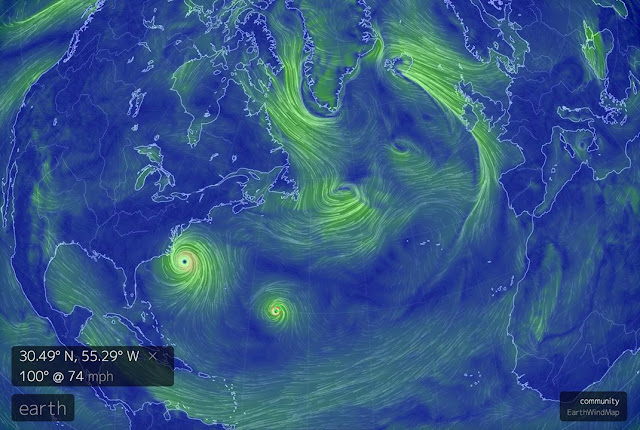 Robertscribbler,
27 September, 2017
Around the world, the litany of climate change related extreme weather events reached an extraordinary tempo over the past week. And it is becoming difficult for even climate change deniers to ignore what is increasingly obvious. The weather on planet Earth is getting worse. And human-caused global warming is, in vast majority, to blame…
Climate Change Related Extreme Weather Spans Globe

(Climate and Extreme Weather Events for September 17 through 24.)
Puerto Rico is still knocked out a week after Maria roared through. With Trump basically ignoring this worst in class blow by a hurricane ramped up by human-caused climate change, it will be a wonder if this territory of 3.4 million U.S. citizens ever fully recovers.

In other and far-flung parts, Brazil is experiencing an abnormally extreme dry season. Australia just experienced its hottest winter on record. In Teruel, Spain, thunderstorms forming in a much warmer than normal atmosphere dumped half a meter of hail. Antarctic sea ice is hitting record lows after being buffeted by warm winds on at least two sides. And in Guatemala, Mexico, Poland, the Congo, Malaysia, Indonesia, Thailand, India and Oklahoma, there have been extreme or record floods.


Philip Klotzbach‏Verified account @philklotzbach
#Lee is now a major hurricane with max winds of 115 mph - the 7th Atlantic hurricane season on record with 5 Cat. 3+ hurricanes by Sep 27.
3:51 AM - 28 Sep 2017

More locally to the U.S., in the North Atlantic warmer than normal surface waters have fueled the odd development of hurricane Lee into a category 3 storm. It’s not really that strange for a major hurricane to develop in the Atlantic during September. It’s just that we’d tend to expect a storm of this kind to hit such high intensity in the Gulf of Mexico, or over the Gulf Stream, or in the Caribbean. Not at 30.6 N, 56.8 W in the Central North Atlantic south and east of Bermuda and strengthening from a weaker storm that was torn apart in the Inter-Tropical-Convergence-Zone, before drifting considerably to the north over what would typically be a less favorable environment.

But typical this present hurricane season is not. Maria, which is still a hurricane after ten days, is presently lashing coastal North Carolina with tropical storm force gusts as it moves ever so slowly to the north and east. With Irma lasting for 14 days, Jose lasting for 17, and Lee lasting for 13 so far, 2017 may well be the year of years for long duration, intense storms. Meanwhile, a disturbance to the south of Cuba shows a potential for developing into yet another tropical cyclone.
Closing in on Record Accumulated Cyclone Energy

Storms lasting for so long and hitting such high intensity produce a lot of energy. And the primary measure we have for that expended energy is ACE or Accumulated Cyclone Energy. 2017 is bound to achieve one of the highest ACE measures for any Atlantic Hurricane Season. Since 1851, only 8 years have seen an ACE value hit above 200. Present 2017 ACE is at 194 and climbing. Highest ever ACE values were recorded in 2005, at 250, and 1933 at 259.
Individual storm ACE values are also impressive with 2017 presently showing 3 storms with an individual ACE higher than 40. Only 27 storms with a 40+ ACE value are ever recorded to have formed in the Atlantic. Irma, so far, is the highest ACE for 2017 at 66.6 — which is the second highest individual storm ACE ever for the Atlantic. Jose produced an ACE of 42.2 (24th) and Maria an ACE of 41.4 (26h).

If 2017 continues to produce strong, long-lasting storms over a record hot Atlantic, it is easily within striking distance of a record ACE year. The restrengthening of Lee to major hurricane status so far north and out in the Atlantic was yet one more surprise that shows how much energy the Atlantic is bleeding off this year. Such a tendency will likely continue through October but with storms probably not forming quite so frequently as during September and originating in regions closer to the Caribbean and U.S.
Links: