Warning of oil shortages in 2018

Peak Oil raises its head again,although it never went away


Citi Says Get Ready for an Oil Squeeze 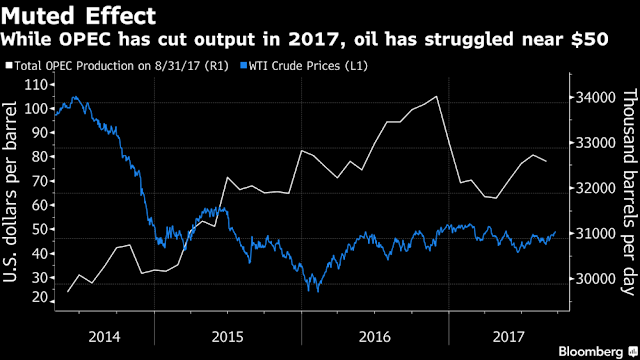 Those in the oil market fearing a flood of OPEC supply next year will probably be better off preparing for a shortage, according to Citigroup Inc.

Five countries in the group -- Libya, Nigeria, Venezuela, Iran and Iraq -- may already be pumping at their maximum capacity this year, Ed Morse, the bank’s global head of commodities research, said in an interview. Rather than a surge in output, there’s a risk of a market squeeze emerging as early as 2018, driven by those nations because of weaker investment in exploration and development, he said.

“Fear in the market has been that OPEC production will rise dramatically,” said Morse. However, “there could be a supply gap emerging, which could point to a tighter market,” he said in Singapore on the sidelines of the S&P Global Platts APPEC Conference.

Crude is still trading more than 50 percent below mid-2014 levels amid concern over whether output curbs by the Organization of Petroleum Exporting Countries will be enough to eliminate a global glut. A gathering in Vienna last week between OPEC and its allies ended with no decision on an extension or deepening of the cuts beyond the first quarter of 2018, while the potential revival of U.S. shale production is also weighing on the outlook for prices.

If the output reductions are prolonged, that would only hasten the prospect of a tighter market, said Morse, adding that the source of the supply squeeze will probably be OPEC rather than producers outside the group. “There’s no room for them to do more,” he said, referring to the five nations.

In Iran, investors may be vulnerable to U.S. sanctions on dealing with companies owned by the Middle East nation’s Revolutionary Guards, the premier security force that dominates the domestic services sector, said Morse. The OPEC producer is shipping a combined 2.6 million barrels a day of crude and the ultra-light oil known as condensate, and expects to export more at the end of 2017, according to the National Iranian Oil Co.

Morse said Iraq’s contract terms weren’t competitive, while major energy companies such as Lukoil PJSC and Royal Dutch Shell Plc had either pulled out of projects or bemoaned the drop in investments. Libya and Nigeria have brought back as much production as they can, he said.

Brent crude in London slipped 0.6 percent to $58.68 a barrel at 5:42 p.m. Singapore time. The benchmark for more than half the world’s oil rose to the highest close in more than two years on Monday. West Texas Intermediate fell 0.5 percent to $51.97 a barrel in New York.