A positive feedback known since 2012

This is a positive feedback reported by Guy McPherson back in 2012 (from the scientific literature) but the Washington Post is catching up with this now.


No doubt for some the phenomenon will still exist and we’ll still be told in this country we just need to get out an plant trees along with aquiring a Prius.

This manages to ignore the phenomenon of tropical forests burning across the world churning CO2 and other gasses into the atmosphere. They can NEVER tell you the whole truth! 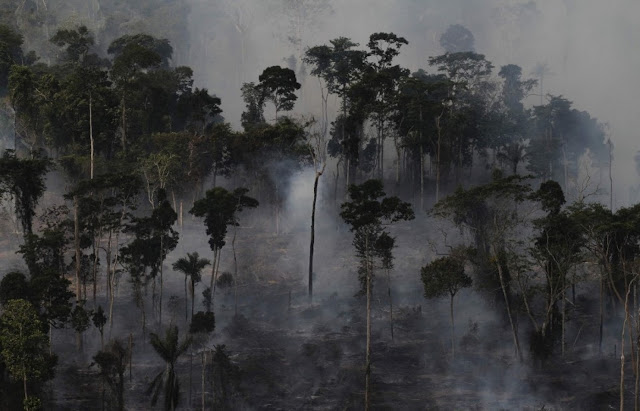 Smoke billows as an area of the Amazon rain forest is burned to clear land for agriculture on Sept. 23, 2013, near Novo Progresso, in Brazil’s Para state. (Nacho Doce/Reuters)

A surprising scientific study released Thursday presents troubling news about the enormous forests of the planet’s tropical midsection — suggesting that they are releasing hundreds of millions of tons of carbon to the atmosphere, rather than storing it in the trunks of trees and other vegetation.

The results, published in the journal Science, contradict prior work in suggesting that these forests — including the Amazon rain forest but also huge tropical forests in Indonesia, Congo and elsewhere — have become another net addition to the climate change problem. However, the accounting also implies that if the current losses could be reversed, the forests could also rapidly transform into a powerful climate change solution.

“The losses due to deforestation and degradation are actually emitting more CO2 to the atmosphere, compared with how much the existing forest is able to absorb,” said Alessandro Baccini, the lead author of the study and a researcher at the Woods Hole Research Center. He conducted the study with fellow scientists from Woods Hole and Boston University.

The result, which spans the years from 2003 to 2014, differs from prior findings, which had suggested the forests of the tropics are a “sink” for carbon atoms. The forests were believed to be pulling carbon out of the air and embedding it in living plants — or, perhaps, only losing a little bit of carbon and thus amounting to a minor source.

The study, however, focuses not only on the effects of deforestation but also forest degradation and disturbance. Degradation occurs, for instance, when there is selective logging of some of, but not all, the trees in an area; disturbance, meanwhile, would include the effects of wildfires and drought (which may also be influenced by climate change).

Deforestation is considerably easier to measure, since it can be easily observed from space by satellite — you simply measure the area of places where trees have disappeared. But degradation is more subtle. The study managed to detect this kind of change using satellite, laser, and ground measurements to analyze forest areas specifically for the carbon content they contained, rather than simply for the area covered by trees.

Hence the surprising result — deforestation may matter less than more subtle but cumulative changes to forests.

“Almost 70 percent of the losses in biomass are due to degradation,” Baccini said.

That result was definitely puzzling to Guido van der Werf, a scientist at VU Amsterdam who studies global forest fires and forest changes using satellite and other techniques.

“If you consider that they have not taken emissions from degradation of tropical peatlands — as is happening in Indonesia and is a considerable source — into account the pictures becomes even more out of tune with our current understanding,” he said by email. “The authors provide a discussion of potential reasons behind the discrepancy but, if correct, the work certainly challenges the way we account for the global flows of carbon between various reservoirs and places on earth.”

Van der Werf cautioned that one thing that’s quite hard to measure is the slow but steady growth of forests over time — a factor that pulls carbon out of the atmosphere and that should be enhanced under climate change. Overall, his comments suggest that the new work will have to be carefully weighed by other scientists who are also steeped in the tools of global carbon accounting.

In a “normal” state — before human interference with the atmosphere or with forests themselves — the forests of the tropics would have been neither a source of atmospheric carbon nor a sink storing it up, according to van der Werf. Rather, they would have been roughly carbon “neutral,” as the death and decomposition of trees would be offset by new growth.

“There will be inter annual and decadal variability because of weather but at some point that should balance as long as there are no trends in climate or other factors influencing the forests,” he said by email, referring to forests in an unperturbed state.

But humans have changed all of that, through direct subtraction of living trees from forests and also, perhaps, by engendering climate trends that also may endanger them through drought, worse wildfires or other disruptions of forest water cycles.

Specifically, the study found that tropical forests are losing 425 million tons of carbon annually, on average, which is the net result after you sum up 861 million tons of losses and 436 million tons of gains as forests grow each year. It’s important to note, however, that when trees are cut down by loggers, for instance, it is not always the case that the carbon they contain goes straight into the atmosphere. It could be preserved in wood used for construction, for instance.

“There seems to be a lag between deforestation and the equivalent amount of CO2 being released from decaying logs and debris,” noted Tom Lovejoy, a tropical forest expert at George Mason University (Lovejoy is on the board of the Woods Hole Research Center but was not involved in the research). “Also to a lesser extent from wood products. So the atmospheric carbon, while a true measurement, doesn’t fully reflect what is inevitably coming.”

In any case, the net result is not good for the planet.

“Forests are losing more carbon than we thought,” Baccini said. “And one reason they’re losing so much carbon is because there is actually a lot of disturbance in the forest. You don’t have to wait for deforestation. You don’t have to only look for places that completely lost the trees.”

Peering more closely, the study was able to show that the Brazilian Amazon, the largest and most critical forest in the equation, started to store more carbon (while still showing net losses) in the 2000s thanks to helpful forest policies. But in the most recent years, the Amazon took a turn for the worse.

However, Baccini also said that because of the peculiar carbon math of how forests work, this means that major forest policy changes — eliminating deforestation, curbing degradation, and restoring forest land — could have a major effect, and a fast one, in curbing climate change.

That’s because forests are already naturally storing 436 million tons of carbon per year — so if you reverse some of the larger losses, it is possible to get forests back to pulling carbon out of the atmosphere and thus dampening climate change.

“The bad news here in this study is that yes, the tropical forests are a source,” Baccini said. “But the good news is that because they are a source, there is also a potential to invert and change it back to a sink.”