Puerto Rico - more habitat for humans and others destroyed

Puerto Rico agriculture destroyed by Hurricane Maria – “Agriculture in Puerto Rico is over. This really is a catastrophe.” 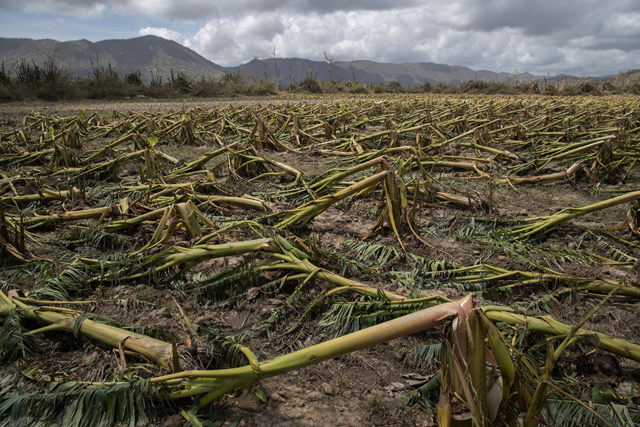 YABUCOA, P.R. (The New York Times) – José A. Rivera, a farmer on the southeast coast of Puerto Rico, stood in the middle of his flattened plantain farm on Sunday and tried to tally how much Hurricane Maria had cost him.

“How do you calculate everything?” Mr. Rivera said.

For as far as he could see, every one of his 14,000 trees was down. Same for the yam and sweet pepper crops. His neighbor, Luis A. Pinto Cruz, known to everyone here as “Piña,” figures he is out about $300,000 worth of crops. The foreman down the street, Félix Ortiz Delgado, spent the afternoon scrounging up the scraps that were left of the farm he manages. He found about a dozen dried ears of corn that he could feed the chickens. The wind had claimed the rest.

“There will be no food in Puerto Rico,” Mr. Rivera predicted. “There is no more agriculture in Puerto Rico. And there won’t be any for a year or longer.”

Hurricane Maria made landfall here Wednesday as a Category 4 storm. Its force and fury stripped every tree of not just the leaves, but also the bark, leaving a rich agricultural region looking like the result of a postapocalyptic drought. Rows and rows of fields were denuded. Plants simply blew away.

In a matter of hours, Hurricane Maria wiped out about 80 percent of the crop value in Puerto Rico — making it one of the costliest storms to hit the island’s agriculture industry, said Carlos Flores Ortega, Puerto Rico’s secretary of the Department of Agriculture.

Across the island, Maria’s prolonged barrage took out entire plantations and destroyed dairy barns and industrial chicken coops. Plantain, banana and coffee crops were the hardest hit, Mr. Flores said. Landslides in the mountainous interior of the island took out many roads, a major part of the agriculture infrastructure there.

Puerto Rico already imports about 85 percent of its food, and now its food imports are certain to rise drastically as local products like coffee and plantains are added to the list of Maria’s staggering losses. Local staples that stocked supermarkets, school lunchrooms and even Walmart are gone.

“Sometimes when there are shortages, the price of plantain goes up from $1 to $1.25. This time, there won’t be any price increase; there won’t be any product,” Mr. Rivera said. “When I heard the meteorologist say that the two had turned into a three and then a four, I thought, ‘Agriculture in Puerto Rico is over.’ This really is a catastrophe.”

He noted that other islands that export food to Puerto Rico, such as the Dominican Republic, Dominica and St. Martin, were also hit, and that the food supply could be even more precarious if the island’s other suppliers were also affected. […]

“I have never seen losses like these in any of my 80 years,” he said as he stood on a riverbank, counting the number of coconut trees that fell. He could earn $100 a month from each one of them. A dozen cracked in half, beside a nursery where the winds swept away all the seedlings and left behind broken glass and ruin. [more]