"No military assistance while White House spews vile atheoretical neoliberał dogma about debt. Makes me want to pause building our little farm and write a formal academic icy glare long fingernailed essay. This is hell and they arę bastards."

“Hysteria is starting to spread”: Puerto Rico is devastated in the wake of Hurricane Maria
No power, little access to water, dwindling food: the situation in Puerto Rico right now. 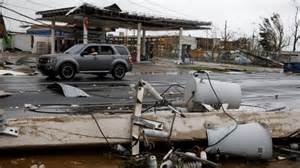 Five days after Hurricane Maria tore through Puerto Rico, bisecting the entire island, the US territory is in the grips of a serious, life-threatening crisis, with humanitarian aid getting in far more slowly than is needed.

The island is running short on food, fuel, and access to clean water and there’s limited communications, which means some communities have received no information about the rescue efforts underway.

Among the greatest threats is the continuing lack of power throughout much of the island, after nearly the entire power grid was knocked offline during the storm (about 80 percent of the transmission infrastructure was destroyed). The New York Times reports it could be four to six months before power is restored on the island. That’s half a year with Puerto Rico’s 3.4 million residents relying on generators, half a year without air conditioning in the tropical climate, half a year where electric pumps can’t bring running water into homes, half a year where even the most basic tasks of modern life are made difficult.

“The devastation is vast,” Puerto Rico Gov. Ricardo Rossello said in a statement Monday. “Make no mistake — this is a humanitarian disaster involving 3.4 million U.S. Citizens.”

The storm has claimed at least 10 lives in Puerto Rico so far, according to the Associated Press. But John Mutter, a Columbia University professor who specializes in natural disasters and studied the death toll from Hurricane Katrina, expects in the coming days it will reach into the hundreds.

“Being without power is huge,” says Mutter. “Just how quickly they can get it back is still an unknown thing. But it’s extremely important they get it going to suppress the chances of illness following the storm.”

“Hysteria is starting to spread” 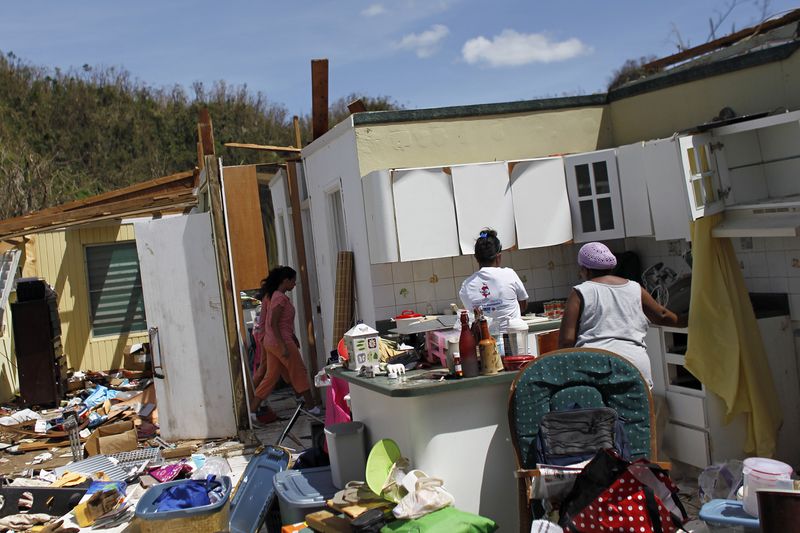 Other islands -- including Dominica and the US Virgin islands — were devastated by Maria too. And the whole Eastern Caribbean region is also still reeling from the effects of Hurricane Irma.

Puerto Rico is the most populated island Maria hit. And the crisis there is particularly intense. For one, it’s exacerbated by lack of communications. (1,360 out of 1,600 cellphone towers on the island are out.) Many communities have been isolated from the outside world for days, relying only on radios for news. The communications shortage means the full extent of the crisis has not been assessed.

"The devastation in Puerto Rico has set us back nearly 20 to 30 years," Puerto Rico Resident Commissioner Jenniffer Gonzalez told CBS News. "I can't deny that the Puerto Rico of now is different from that of a week ago. The destruction of properties, of flattened structures, of families without homes, of debris everywhere. The island's greenery is gone."

But over the weekend, a handful of journalists were able to make it in to communities that have been isolated.

The Washington Post reported from Juncos, Puerto Rico, a municipality in the Central Eastern region of the island. There, they found a diabetic woman afraid that the refrigeration that keeps her insulin preserved will soon run out, people living in homes missing roofs or whole second floors, and where the villagers asked journalists upon their arrival, “Are you FEMA?”

There are few hospitals with running generators, CNN reports, and fewer with running water. Reuters reports that hospitals are scrambling to find diesel fuels to power generators, and that food supplies are running low. A cardiovascular surgeon the newswire spoke with explained:

…without air conditioning, the walls of the operating room were dripping with condensation and floors were slippery. ... Most patients had been discharged or evacuated to other facilities, but some patients remained because their families could not be reached by phone.

USA Today made it to the town Arecibo on the Northern shore of the island, where residents hadn’t heard any news from the outside world for four days, and the only source of fresh water is from a single fire hydrant.

“Hysteria is starting to spread,” Jose Sanchez Gonzalez, mayor of Manati, a town on the North shore, told the Associated Press. “The hospital is about to collapse. It’s at capacity. … We need someone to help us immediately.”

But the list of woes is much longer. An untold number of homes are irreparably damaged. Infrastructure is badly damaged. People aren’t working. The storm was particularly costly for the agriculture industry: “In a matter of hours, Hurricane Maria wiped out about 80 percent of the crop value in Puerto Rico,” the New York Times reports.

Even the National Weather Services Doppler weather radar station on the island has been destroyed. That’s the radar that helps meteorologist see where thunderstorms and other weather systems are moving in real time. “Not having radar does make future storms more hazardous,” says Jeff Weber, a meteorologist with the National Center for Atmospheric Research.

Meanwhile, new crises keep forming in the wake of the storm. On Friday, the National Weather Service issued a dire warning about the Guajataca Dam in the Northwestern corner of Puerto Rico, threatening downstream areas with deadly floods. Seventy thousand people — enough to fill a small city — have been asked to evacuate areas that could be flooded by the nearly 11 billion gallons of water the dam holds back.

And leaving is not an option, at least for now. “Travelers at the airport on Sunday were told that passengers who do not already have tickets may not be able to secure flights out until October 4,” Reuters reports. 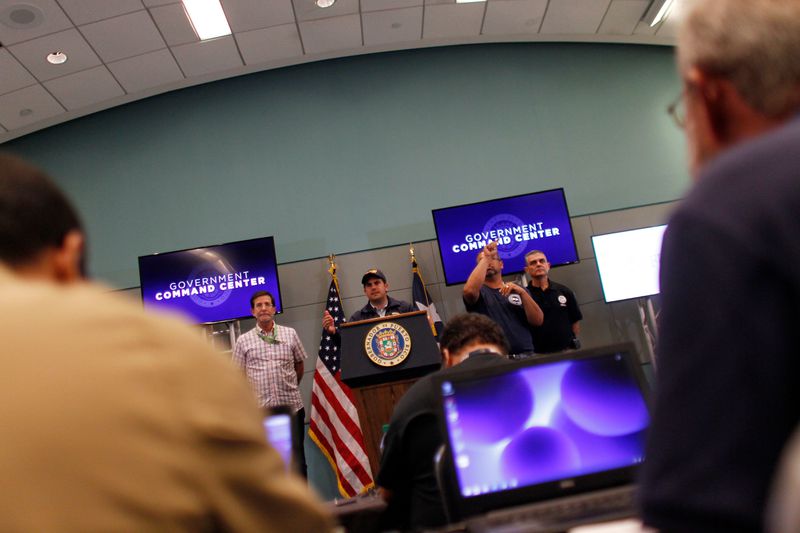 Puerto Rico is an island, which complicates recovery efforts. Supplies have to be flown in or arrive via ship. Most of the sick and elderly haven’t been able to evacuate.

Still, the relief efforts will take time to make their way to communities across the island. “We need more resources from the Department of Defense so we can get helicopters and resources,” Puerto Rico Gov. Rossello told Politico Sunday. He also implored Congress to pass a special aid and relief package for the US territory.

“Whatever relief package we have, whatever impact we have, we are U.S. citizens," Rossello said. Puerto Rico’s finances are already strapped. The territory filed for bankruptcy earlier this year. The island’s finances are now controlled by a federal board, which made just $1 billion available for relief, the AP reports.

“Given Puerto Rico’s fragile economic recovery prior to the storms, we ask the Trump Administration and the U.S. Congress to take swift action to help Puerto Rico rebuild,” Rossello said in his Monday statement.

Ricardo Rossello‏Verified account @ricardorossello
.@SpeakerRyan: We will need all your support as we rebuild rebuild #PuertoRico. 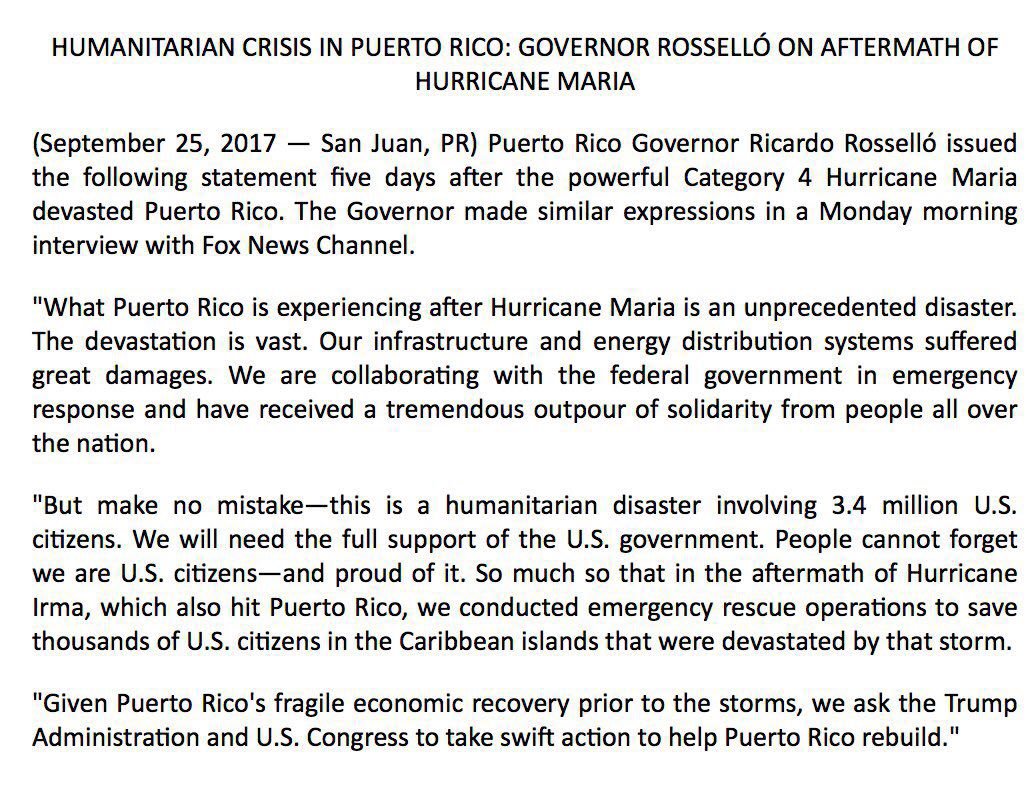 Meanwhile, President Donald Trump has not mentioned Puerto Rico in his Twitter feed since the day after the storm hit. Trump approved a disaster declaration for the island that day too, freeing up federal resources for the recovery. This past weekend, as the situation on the ground in Puerto Rico came into better focus, Trump took to Twitter to call out professional athletes for kneeling down during the National Anthem.

In a series of tweets, Mr. Trump said “much of the island was destroyed” by Maria, but added that Puerto Rico’s billions in debt to Wall Street and banks “sadly, must be dealt with.”

“Texas & Florida are doing great but Puerto Rico, which was already suffering from broken infrastructure & massive debt, is in deep trouble,” the president said. “It’s old electrical grid, which was in terrible shape, was devastated.”

The president said food, water and medical supplies “are top priorities - and doing well.” Some have criticized the administration for moving too slowly with relief aid for the island.

Before Maria hit, Puerto Rico was already dealing with the worst debt crisis in U.S. municipal history, having defaulted on more than $70 billion owed to creditors

Donald J. Trump‏Verified account @realDonaldTrump
...It's old electrical grid, which was in terrible shape, was devastated. Much of the Island was destroyed, with billions of dollars....
1:50 PM - 26 Sep 2017 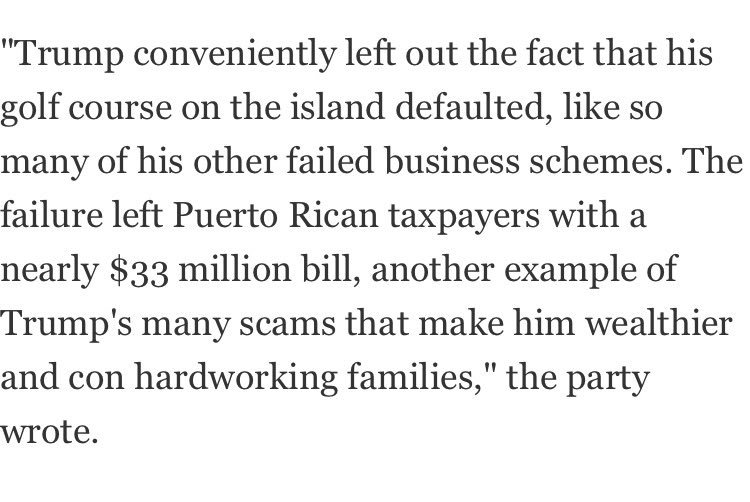