America declares war on North Korea and then declares it hasn't

‘US declared war first’: N. Korea says it has right to shoot down strategic bombers

The North Korean foreign minister says Pyongyang has every right to take countermeasures against US aggression, including shooting down warplanes, even if they are not in North Korean airspace.

Speaking to reporters in New York on Monday, North Korean Foreign Minister Ri Yong Ho said that US President Donald Trump has effectively declared war on Pyongyang, meaning all options were on the table for his country’s leadership.

“The whole world should clearly remember it was the US who first declared war on our country,” Reuters quoted him as saying.

“Since the United States declared war on our country, we will have every right to make countermeasures, including the right to shoot down United States strategic bombers even when they are not inside the airspace border of our country.”

Pyongyang’s accusations that Washington has declared war have been dismissed by the US as “absurd.”

“We've not declared war on North Korea. Frankly, the suggestion of that is absurd,” White House spokeswoman Sarah Sanders told reporters on Monday.
Earlier, an open letter from North Korea to several international parliaments said that President Trump’s remarks in his UN General Assembly speech last week amounted to an “intolerable insult to the Korean people, a declaration of war against North Korea and grave threats to the global peace,” the Korean Central News Agency (KCNA) said in a report.

Speaking before the UN General Assembly last week, Trump said that while the “United States has great strength and patience,” it may have “no choice but to totally destroy North Korea” if the US or its allies are threatened.

Tensions have been running high on the Korean Peninsula, with bellicose rhetoric and provocative military activities coming from both the Democratic People’s Republic of Korea (DPRK) on one side, and the United States and South Korea on the other. Pyongyang has conducted several missile and nuclear tests in defiance of rulings by the UN Security Council, while the US has continued to carry out joint exercises with South Korea and Japan while ramping up its own war of words against Pyongyang.

Russia and China have repeatedly called for a ‘double-freeze’ solution to the crisis, in which the United States ceases its drills with South Korea in exchange for the North suspending its weapons programs. However, Washington has not accepted the proposal, saying it has every right to carry out exercises with its allies.

On Saturday, tens of thousands of North Koreans held a rally on Kim Il-Sung Square in Pyongyang to denounce President Trump, in which students marched, chanting slogans and holding banners, proclaiming their willingness to stand behind leader Kim Jong-un.


How this was spun on the BBC -

Despite Trump's unhinged speech at the UN and other threats ("they won't be around for much longer!")..... 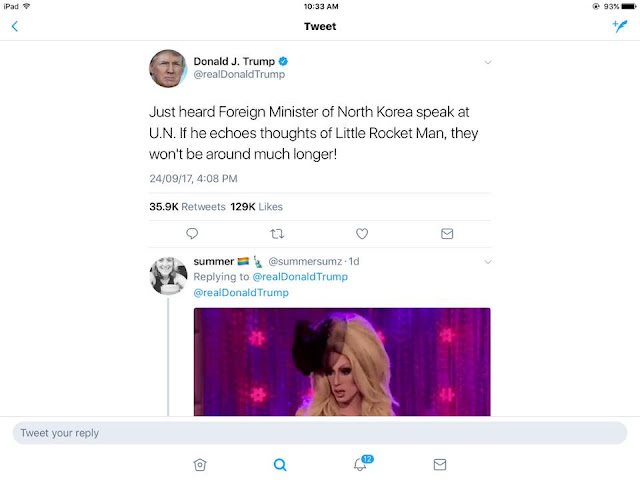 The White House (Obama-style) says they have NOT declared war on North Korea.

The rest of us know they have!

WhiteHouse: "We Have Not Declared War On North Korea; That's Absurd"


“We have not declared war on North Korea and frankly the suggestion of that is absurd,” Sanders said during today's press briefing.

US DECLARES WAR ON N.KOREA (WW3)


Of course you’ve gotta get your priorities right!

"Trump tweeted about sports a total of 17 times between Saturday and Monday morning. He didn’t tweet once about Puerto Rico, where 3.5 million U.S. citizens live."

...and once, threatening North Korea.

This is not just a Trump problem - it is an American one - across the entirety of the country.

Another country destroyed? Move on, go shopping, think of something else! 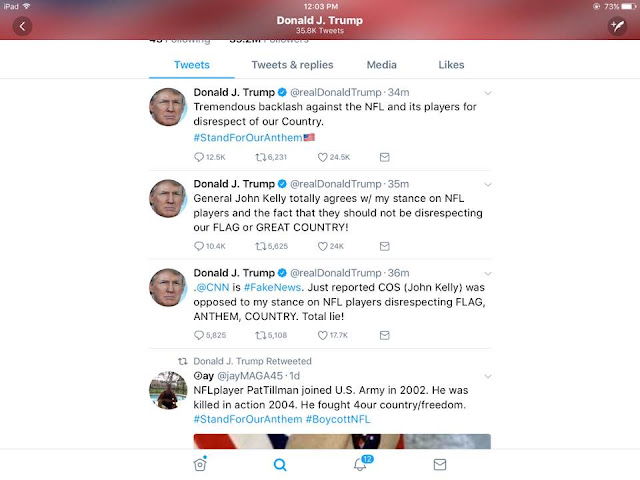